Here's what Chris Alexander thinks of the mainstream media 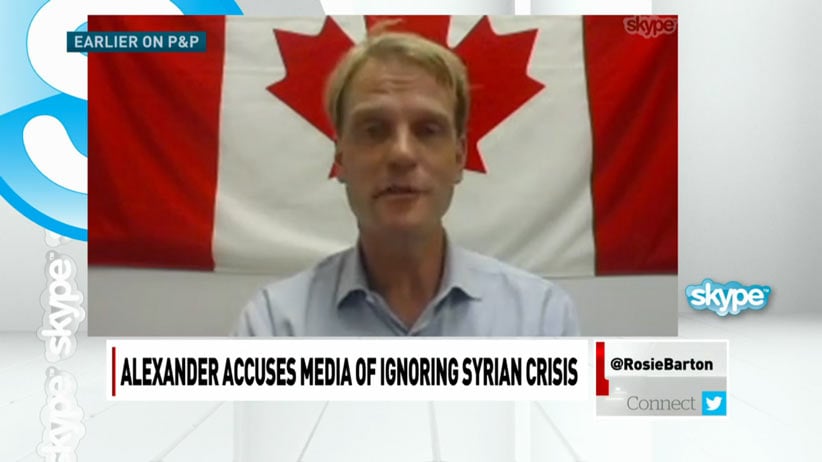 Citizenship and Immigration Minister Chris Alexander doesn’t think much of the national news media. He told me so last month when I dropped by his storefront campaign office in Ajax, Ont., where the once-lionized, still-youthful former diplomat is seeking re-election as the Toronto bedroom community’s MP.

“I’ll tell you this,” Alexander said when I asked about some sharply critical press of which he’s been on the receiving end in recent months, “I’ve worked closely with journalists through my whole career—Russia twice, Afghanistan, now. We rely on journalists to convey our message to a larger community. I have never had a stronger sense that mainstream media, national media, were predisposed against our message.”

By “our message” he meant, of course, the Conservative take on the events of the day.

“I just don’t think,” he continued, “it’s the role of good journalists in political debate to take positions among the parties. I think it is [their] role to convey the messages, decide who’s coherent and credible. But here I think it is a different dynamic, and I didn’t see that before coming into this.”

By “before coming into this,” he meant before the 2011 election, when he first won his Ajax seat as the starriest of the new star recruits running under Stephen Harper’s banner. That had all changed well before the start of the current 2015 campaign, after Alexander utterly transformed his polished-diplomat image by becoming even better known for harsh outbursts in the House and intemperate clashes with journalists.

His attitude toward the press matters this week because Alexander has managed to turn it into an unignorable element in what’s shaping up as the biggest test he’s faced in office. He stepped away from the campaign trail today to cope with how the refugee crisis in the Middle East and Europe has finally crashed into the conscience of many Canadians.

What’s brought the much bigger issue home is the human-scaled story of two boys who drowned. Their Syrian family was trying to escape from Turkey to Greece, the first desperate leg of a planned attempt to make their way to Canada. By now, the heartrending photograph of one of the little boys, washed up on a beach in Turkey, is fixed as an icon of the humanitarian crisis. In a written statement, Alexander alluded to “the tragic photo,” and said he is meeting with officials to sort out the facts of their family’s case and to discuss the larger migrant problem.

But all this unfolded only hours after Alexander needlessly complicated his own political situation by blurting out a dubious criticism of the CBC in a panel discussion on its show Power & Politics. “I’m actually interested in why this is the first Power & Politics panel we’ve had on this,” he said, adding that “the biggest conflict and humanitarian crisis of our time has been there for two years, and you and others have not put it in the headlines where it deserves to be.” The show’s host, Rosemary Barton, later tallied up more than 30 times the issue had been tackled on Power & Politics, including past interviews with Alexander. (Read a full transcript of the segment, here.)

Why would he try to make CBC’s coverage of the story the issue? In part, the answer appears to be Alexander’s combative disdain for the media. It didn’t seem important to quote him at length on the subject for this story on his battle to hold his riding, but in the changed context, his comments might now be more germane. “If you look at immigration files, or the economic files that are much larger ones for our government, our message gets through, whatever may or may not be written on the pages of Toronto Star, or said on the CBC, or on a given day in your magazine,” Alexander told me.

He seemed pretty enthusiastic, however, about other avenues the government relies on. “Whether mainstream media reflects fully what Canadians think and want, that’s really up to you to decide. I’ve noticed in my time here, mainstream media matters less to us. Social media matters hugely. New media, which includes newcomer media, matters hugely. This is where people are going. They’re going where the information is. They are not going where the posturing and the precooked editorial opinion masquerading as a news report is.”

It seems unlikely, though, that over the next few days Alexander will be able to convey the government’s response to the daunting refugee challenge through only his preferred social and new media outlets. The mainstream media, whatever its faults, is on the story. And journalists who work in it will be trying to do what Alexander, after all, described as a legitimate part of their job—figuring out, on this complex set of policy and political questions, “who’s coherent and credible.”