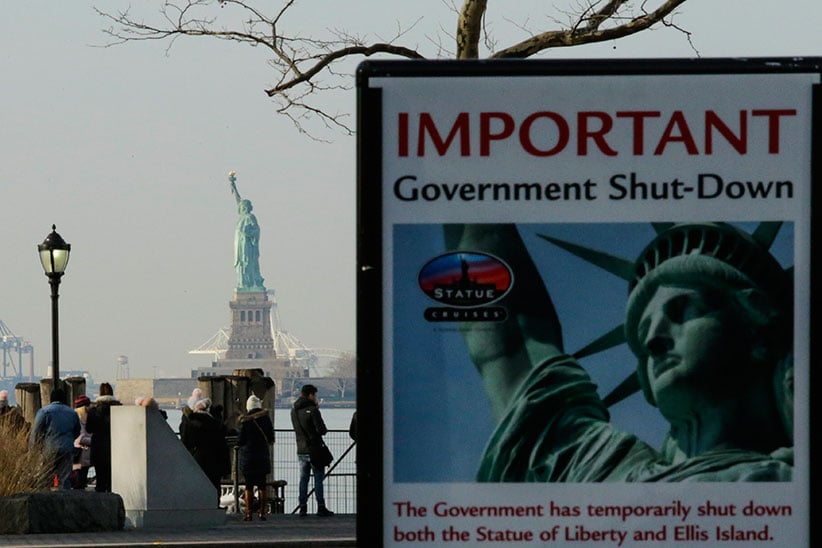 For three days this past week, and for the second time in five years, the operations of the U.S. government came to a halt. When Congress couldn’t agree on how to spend money by a deadline of last Friday, it stopped non-essential services for the weekend—sending many civil servants home and closing certain parks and the Library of Congress—before a short-term agreement was finally reached on Monday evening.

The government risks shutting down again in February, and it could be even more chaotic. During a 17-day shutdown in 2013, the Center for Disease Control and Prevention stopped disease surveillance, the National Institutes of Health stopped answering its hotline, work was halted on more than 3,500 bankruptcy cases, law enforcement was impacted, child support was delayed and national parks, monuments and museums lost a combined nine million visitors. An earlier shutdown in 1995 saw garbage pick-up halted in Washington because the city’s budget comes from Congress.

Watching from north of the border, the question arises: Why is Canada immune to such standstills?

It comes down to our mode of government, the Westminster Parliamentary system, and a failsafe that ensures the civil service continues to operate even when there’s no budget.

READ: Will a federal government shutdown damage the U.S. economy?

“For us, the budget is a matter of confidence,” explains Paul Thomas, a post-doctoral fellow of political science at Carleton University. If the ruling party can’t get enough votes to pass a budget, it’s considered a vote of non-confidence, and the government falls, triggering a general election. “For us, the two are tied.”

Parliament failed to pass budgets under Joe Clark in 1979, and under Paul Martin in 2005, and elections ensued. While waiting for a new government and new budget, ministers remained in their roles as caretakers. Civil servants weren’t sent home from work; passports and visas didn’t stop getting processed, tourists could still visit monuments, and hikers could still camp in national parks.

Instead of shutting down government for lack of money, the governing party can ask the governor general to issue a special warrant for funding during an election period. If Parliament is dissolved before a government is able to pass a spending bill, and the Treasury Board confirms no other money is available, a cabinet minister can request the emergency funds from the governor general for “the normal operations of government, ongoing programs, contractual obligations or services to Canadians.”

But the use of special warrants hasn’t always been warranted. Before 1997 special warrants were sometimes used outside election periods, so the government could delay a vote on a budget and avoid triggering an election, yet still finance government operations. In 1972, Pierre Trudeau was accused of exploiting this privilege. “Mr. Trudeau used warrants to cover the ordinary expenses of government from Oct. 1 to Dec. 31, 1972,” argued Sen. Donald Oliver in a debate in 1996. “This seemed a rather curious use of this device to avoid meeting Parliament.”

Worse, in December 1988 Brian Mulroney chose to prorogue Parliament after just 11 days without passing a $33-billion supply bill. Instead he used special warrants to fund the government all the way until April 1989. The controversy led to a private member’s bill limiting the use of special warrants to during the period surrounding general elections.

While the federal bureaucracy has survived on special warrant funds for months at a time, the longest government shutdown in the United States lasted three weeks, from 1995 to 1996. Health inspectors, librarians and NASA employees—except for astronauts in orbit—stopped work.

During the Obama-era shutdown, signs on fences read, “because of the government shutdown, all national parks are closed.” Those words will never be a message from the Government of Canada.