How should Andrew Scheer talk to Canadians?

John Geddes in Halifax: The Tory leader faces two routes: Fight ideological battles or focus on deliverables. He might be best telling his own story. 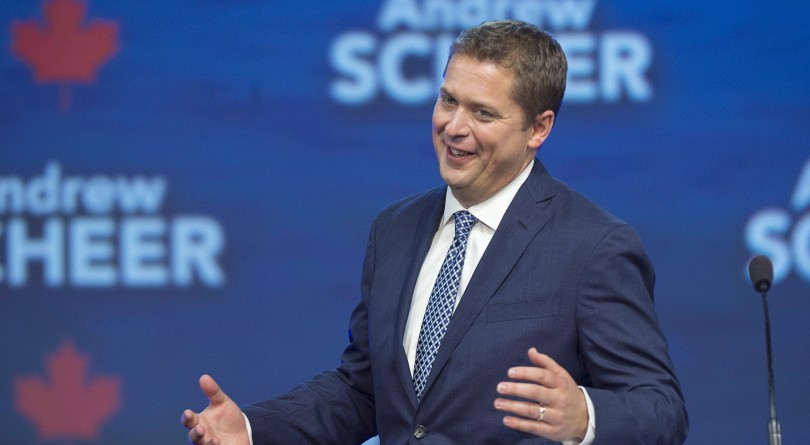 Conservative Party of Canada Leader Andrew Scheer reacts to the crowd as he prepares to speak at the party's national policy convention in Halifax on Friday, Aug. 24, 2018. (THE CANADIAN PRESS/Andrew Vaughan)

Before Andrew Scheer even took the stage this evening at the Conservative Party of Canada policy convention in Halifax, attentive delegates here might have noticed that two contrasting visions had already been proposed for the path they should follow, or the tone they should adopt, leading into next year’s election.

The two routes Tories were urged to follow came from two totemic figures in the party at this moment: Ontario Premier Doug Ford and Hamish Marshall, Scheer’s old friend and national campaign manager. In his fulminating Thursday evening speech to this convention, Ford implored the party not to shrink from an outright culture clash. In a smaller session today on the party’s campaign readiness, Marshall warned that voters don’t want to hear politicians arguing about “ideological purity and who’s more virtuous or not.”

Ford portrayed Conservatives as under attack by, not just their main Liberal adversaries, but a broader, loose affiliation of snobs. “We won the election because we stayed true to our values and principles, because we refused to back down,” Ford said of his recent provincial election victory. “We weren’t listening to the elites, or the academics, or the pundits. We didn’t listen to the political insiders, the special interests, or the professional activists. And I can tell you, my friends, we sure didn’t listen to the media.”

The following morning, however, Marshall adopted a more calmative tone while taking questions, largely from campaign organizers and operatives. “This is something that is very important,” he said. “What our campaign is going to be about is how we as Conservatives in government can make lives better, and focus on tangible outcomes, instead of focusing on a battle of philosophy.” Marshall warned that movement Conservatives risk lapsing into a way of talking that’s no less out-of-touch than the holier-than-thou messaging of their left-of-centre rivals. “There’s this tendency among radicals of all types to get into an idea of ideological purity and who’s more virtuous or not,” he said.

READ MORE: If Justin Trudeau loses, it will be because of Andrew Scheer’s secret weapon

He went on in a way that sounded to me to be aimed at the more strident sorts in the room. “I think that is extremely interesting to a small group of people who spend a lot of time thinking about politics and philosophy,” he said. “And I think most severely normal Canadians, when they hear that, frankly whether it comes from the left or the right, go, ‘What the hell does this have to do with my gas bill being so high?’”

Scheer is the sort of politician who could go either way on this split in styles. He’s naturally low-key, a nice fit for “severely normal” pragmatism. But his roots are in the Reform wing of his party, where ideology matters, and an anti-elite self-image not foreign to Ford Nation runs deep. As it turned out, big swaths of his speech didn’t have much to do with those “tangible outcomes” Marshall mentioned. He sounded more like he wanted to connect with the defiant excitement that Ford fed—and fed off.

So he made much of Victoria city council’s recent decision to take down a statue of Sir John A. Macdonald. Mere mention of Macdonald, the country’s first PM and, of course, the most iconic of Tories, brought the crowd to its feet. “I think it’s a disgrace that we’re allowing extreme voices in this country to erase our proud heritage,” Scheer said. Never mind that Liberal Environment Minister Catherine McKenna, speaking as the minister responsible for Parks Canada’s many memorials, has already come out against taking down statues. Scheer is setting himself up against, not just Liberals, but the forces of “political correctness”—exactly as Ford suggested he should.

He also touched on practical matters, of course, like cutting gas prices, particularly for lobster fishermen (remember, this was in Nova Scotia). But Scheer fired up the crowd much more when he offered a vision of what Canada is all about, rather than when he mentioned mundane matters like the cost of filling up. This was oratory to partisans, after all, not a platform launch.

He took aim at a well-worn Liberal slogan on diversity. “Justin Trudeau says that ‘diversity is our strength,’ but I think he’s missing the big picture,” Scheer said, arguing immigrants come to Canada for freedom and opportunity. “Diversity is a product of our strength, and our strength is and ever has been our freedom.”

Some Conservative insiders said the key component of Scheer’s speech actually wasn’t about either Ford’s culture clash or Marshall’s deliverables. They said the crux was their leader’s personal story. B.C. MP Mark Strahl, who is considered close to Scheer, sees the 2019 election shaping up as a contest between Trudeau’s star power and Scheer’s down-to-earth quality. He argues that Trudeau’s ill-advised trip to India last winter—infamous for his frequent photo-ops in colourful garb—proved the PM’s vulnerability in a coming battle of  bios.

“I think when people look at Justin Trudeau, they see a celebrity politician,” Strahl said in an interview. “I think the India trip was where Canadians started to pay attention to that. What is Justin Trudeau about? He seems to be a photo-op prime minister? If they start to grow tired of that, want to see someone more like them, Andrew Scheer will start to show very well.”

Scheer left no doubt this evening that he’s determined for voters to see him as an ordinary guy. His father was the newsroom librarian at the Ottawa Citizen, his mother a nurse. He used a good chunk of his speech to reflect on his childhood in their townhouse. Sentimental fare, but delivered effectively. “We didn’t own a car, so we took the bus everywhere. Mom would buy everything second-hand, so my sister could have dance lessons, so I could play baseball,” he said. “My mother was my hero. She passed away last year, right before I was elected leader.”

For all the normalcy of his upbringing, Scheer’s adult life in politics might be harder for most Canadians to imagine. He went to work as a part-time volunteer on Parliament Hill as a teenager, was elected an MP at 25, Speaker of the House at 32, and Conservative leader last year at 38. That doesn’t really look like a severely normal life experience, but neither is it the making of the ideological combatant some Conservatives would like Scheer to become.

It’s the résumé of that uncelebrated sort of politician: the career pro. And Scheer’s speech tonight sounded like the work of one.