How things feel around that teepee on Parliament Hill 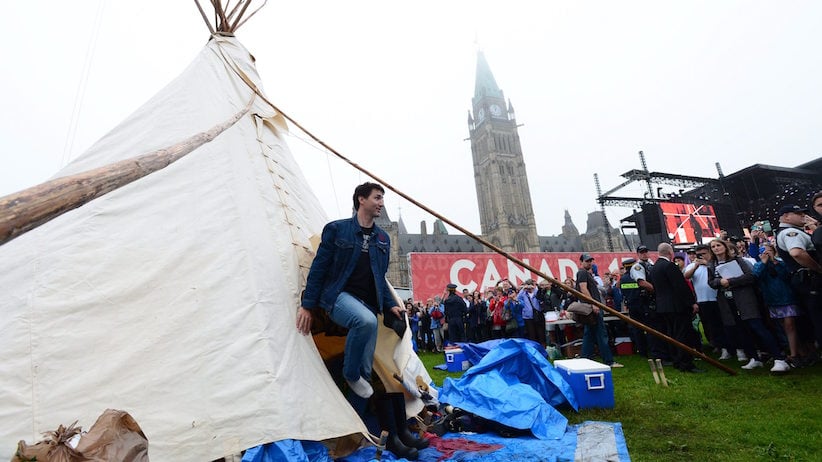 Look south from the white teepee that First Nations activists have erected on Parliament Hill’s lawn, and the view across Wellington Street of the historic former U.S. embassy building is excellent.

I pointed it out this afternoon to Brendon Nahwegezhic, of the Bawaating Water Protectors, the First Nations group from Sault Ste. Marie, Ont. that put up the teepee to draw attention to Indigenous issues, just as the Hill is prepping for the big July 1st celebration of Canada’s 150th birthday.

It was only last week that Prime Minister Justin Trudeau declared, with some fanfare, that the vacant former U.S. embassy will be turned into an Indigenous cultural centre. Banners representing First Nations, Metis and Inuit hang there in honour of its new designation. Top leaders of all the major Indigenous groups, Perry Bellegarde, national chief of the Assembly of First Nations prominent among them, were on hand for Trudeau’s announcement.

But Nahwegezhic, 22, draped in a yellow rain poncho and wearing a ball cap emblazoned with the words Stay Chiefin’, didn’t seem impressed. “I’m not that familiar with it,” he said, peering over at the 1930s beaux-arts building through the drizzle. But he had vaguely heard the complaint that the building isn’t appropriate for Indigenous purposes. “It’s a representation of colonization,” Nahwegezhic said. “It’s a government building.”

READY MORE: A B.C. reconciliation totem’s lessons on how to move forward

The strategic problem for Trudeau’s government is that youth activists, in sufficient numbers, arguably outweigh establishment figures. In other words, they can reach all the Bellegardes, but not all the Nahwegezhics. Back in 2013, remember, the Idle No More demonstrations started as an inchoate grassroots movement, and mainstream First Nations leaders had to improvise to catch up and harness its energy.

On the Hill this afternoon, around the teepee, I didn’t hear anything that added up to a manifesto for action, but caught some telling references to models for action. “We’re inspired by Standing Rock,” Nahwegezhic said, referring to the Standing Rock Sioux Tribe’s leadership of ongoing efforts stop construction of the Dakota Access pipeline, which would run from the Bakken oil fields of North Dakota to a refinery in Illinois.

Paul Francis, 24, who told me he’s a member of the Mi’kmaq Warrior Society, drove in from his home in New Brunswick to be on the Hill for whatever is going to transpire. He took part in the Elsipogtog First Nation’s 2013 protests against developing shale natural gas through fracking. “That was my first taste of what the police state can do to my people,” Francis said.

He also seemed not to think much of the centre Trudeau promises to create across the street, which he assumes will be a showcase for Indigenous art. “They only appreciate the art,” Francis said. “They don’t appreciate our resistance as a people.”

The Bawaating group arrived from Sault Ste. Marie on Wednesday to try to put up the teepee, but police initially wouldn’t allow it and arrested nine people. Then negotiations led to it being permitted at the northwest corner of the Parliament Hill lawn, not far from the main stage for the July 1st show, and very near the broadcast tents set up by the TV networks covering the event.

Trudeau showed up in a jean jacket Friday morning for a brief chat with activists. He ducked into the teepee. But if that seemed to ease tensions, the mood worsened again in the late afternoon, when Mounties wouldn’t let the tepee group expand their patch of lawn by putting a up a tarp on poles to keep the rain off.

I counted 10 police officers at one point standing stoically on that white plastic sheet to keep it from being turned into a rain shelter. A sound system was set up and protestors took turns with a microphone railing about the situation, among them Ian Campeau, also known as DJ NDN, of the popular hip-hop group A Tribe Called Red, who is a member of the Nipissing First Nation near North Bay, Ont.

Over on to side, I saw two older Indigenous women in clear plastic rain gear chatting pleasantly with a rather nervous looking young police officer. A little girl in a purple leopard-print shirt contentedly ate a slice of pizza by the teepee door. But only a moment earlier, one of speakers with the microphone had angrily asked another Mountie, one of those standing on the edge of the white plastic, “Do you love Canada?” No comment. Nobody budging. It felt like things could slide either way.