How Trudeau hasn't left himself any wiggle room on pipeline politics

In the row between B.C. and Alberta, the PM has carved out an unusually firm personal stance and political strategy on a tough issue 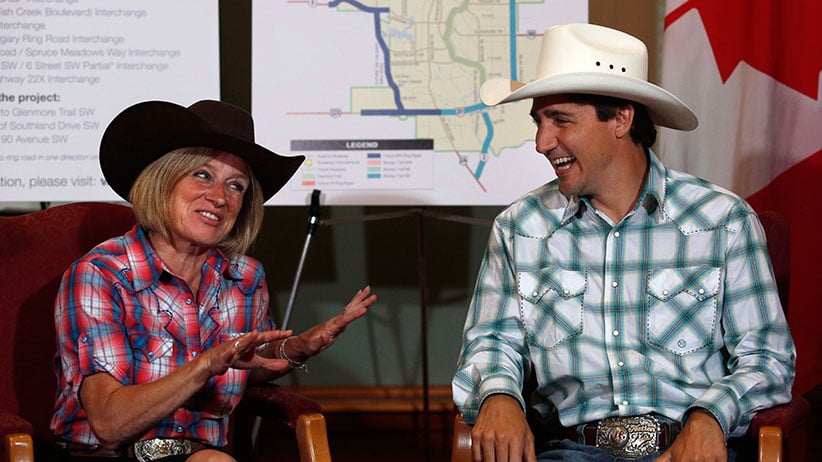 When skilled politicians find themselves in uncomfortably tight places, it’s usually a safe guess that their next move will be to look for wiggle room. What’s the compromise solution, the diplomatic dodge, the safe middle ground?

But the squeeze on Justin Trudeau, as the governments of British Columbia and Alberta clash over pipeline politics, might be an exception to the rule that pliability is a political virtue. The Prime Minister has little choice on this one but to opt for firmness over flexibility.

For starters, this particular controversy comes laden with personal meaning for Trudeau. Back in the fall of 2012, visiting Calgary as the first stop after launching his bid for the Liberal leadership at home in Montréal, he vowed support for Alberta’s oil industry as a sort of declaration of independence from the legacy of his famous father.

In his 2014 autobiography, Common Ground, Trudeau later reflected on that decision to distance himself at the earliest opportunity from the National Energy Program, which is as reviled in Albertan oil-patch memory today as it was resented when then-prime minister Pierre Trudeau hatched it in 1980. He cast it as a willingness to “confront the ghosts of my party’s past.”

READ MORE: Jagmeet Singh tries not to pick sides on the Alberta and B.C. pipeline fight

And Trudeau did more than promise never to repeat anything like the NEP, under which Ottawa aimed, among other controversial objectives, to take a bigger share of Alberta’s oil wealth through taxes and royalties. He wrote that resource development and the policies that guide them are “among the handful of big issues that define our success as a country.” Then he added a point that resonates loudly this week: “In a diverse country where national attachments complement strong and diverse local identities, getting the balance right is vital.”

The clashing “local identities” in play just now are B.C.’s environmental movement and Alberta’s energy sector. Trudeau made his bid to strike a balance between them in the late fall of 2016, when his government rejected Enbridge’s proposal for the Northern Gateway pipeline across northern B.C., but approved Kinder Morgan’s plan to twin its existing Trans Mountain pipeline from Edmonton to the port at Burnaby, B.C., just up the shore from Vancouver.

The symmetry—one green light, one red—looked tidy enough. But there was never any chance B.C. environmentalists would acquiesce to Trans Mountain out of gratitude for being spared Northern Gateway. So it couldn’t have been entirely unexpected when B.C. Premier John Horgan’s NDP government recently announced its plan to block any increase in diluted bitumen shipments—the sort that would flow in Kinder Morgan’s expanded pipeline—while it studies whether the sticky black stuff could be properly cleaned up if it ever spilled in coastal waters.

Trudeau might have hedged, played for time, weighed his words. But, in the Nanaimo, B.C., stop on the national town-hall tour that he happened to be on as Horgan made his move, the Prime Minister couldn’t have been blunter. “It is in the national interest to move forward with the Kinder Morgan pipeline, and we will be moving forward with the Kinder Morgan pipeline,” Trudeau told a room packed with loud anti-pipeline voices.

Note that he didn’t merely assert, for example, that the federal process that led to approving Kinder Morgan’s plan was valid, or maybe stress that the conditions are stringent. He didn’t just boast about his government’s commitment to spend $1.5 billion on a new Oceans Protection Plan. No, Trudeau specifically said Kinder Morgan’s pipeline is going to happen, and his choice of pronoun—“we will be moving forward”—was meaningful. It’s not somebody else’s pipeline.

In part, this all goes back to his 2012 pledge in Calgary. In part, to the 2016 split-the-difference decision on Northern Gateway and Trans Mountain. And, in part, to the strategically crucial relationship between his federal Liberals and Alberta Premier Rachel Notley’s NDP. Trudeau has fulsomely credited Notley’s policy on pricing carbon as a necessary condition for approval of Kinder Morgan.

There’s no question that Notley’s approach to combatting climate change is indispensable to the Trudeau government’s signature push to impose a national price on carbon within this year. Still, Notley didn’t do Trudeau any favours by retaliating against Horgan’s bid to delay Kinder Morgan by ordering Alberta’s provincial alcohol regulator to halt about $70-million worth of B.C. wine imports.

Alberta’s high-profile move against Okanagan wine puts Horgan on the defensive, making the ongoing behind-the-scenes efforts by Trudeau and some of his top officials to defuse the situation that much more difficult. A senior federal official told Maclean’s that while they hope tensions ease, on the fundamental point that regulating interprovincial pipelines is squarely in federal jurisdiction, “we will not bend.”

Not bending isn’t a comfortable posture for a politician like Trudeau, who typically casts himself as classic bridge-building Liberal centrist, capable of leaning left or right as circumstances demand. Looked at in the narrow context of this week’s news, he’s has been put in a tough spot by two feuding premiers. Seen in the wider frame of the past six years, though, he has methodically established both a personal stance and a political strategy on the fault line between environmental awareness and energy economics. Now, he must stand his ground.