Canada will spend $800 million on a few lanes it can dominate globally. But the question of how they'll pick the lucky sectors will be tricky politics 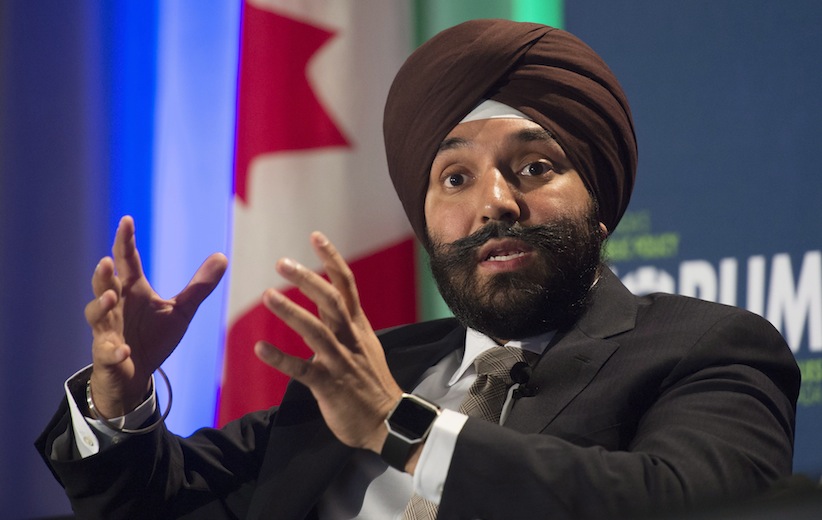 Innovation, Science and Economic Development Minister Navdeep Singh Bains responds to a question from the floor during a policy conference in Ottawa, Wednesday October 12, 2016. THE CANADIAN PRESS/Adrian Wyld

Innovation Minister Navdeep Bains set off something of a buzz among business leaders at a conference in Ottawa today by declaring that the Liberal government will choose a very small handful of promising industry “clusters” for special federal support. Speaking at a one-day event called the Canada Growth Summit, put on by the non-partisan Public Policy Forum, he said that in developing its innovation strategy, the government plans to be “very strategic and thoughtful, and identify maybe three to five clusters in Canada that can be global centres of excellence.”

Bains didn’t drop any hints about which sectors or emerging technologies might be the front-runners, but he did note that the government has earmarked $800 million for the “cluster networks strategy.” The idea was soon being discussed informally around the conference, and was later picked up on during a panel featuring several top corporate figures, including GM Canada president Stephen Carlisle. “I really do think we need to pick some lanes, so to speak, to pick some focus areas, some sectors, some technology areas,” Carlisle said. “We can’t afford do it all. We have to pick some spots and specialize and really be excellent at them.”

Not surprisingly, Carlisle touts the automobile sector as an obvious choice. He is a popular figure among federal policy-makers and politicians just now, having announced earlier this year—with Prime Minister Justin Trudeau at his side—that GM would boost its contingent of engineers in Canada to about 1,000 from about 300 over the next few years, giving the auto giant’s Canadian arm a potentially key part to play in its push into developing much more technologically advance cars.

But, then, every industry, and all the regions where they are concentrated, will argue for a place on the short list Bains promises is coming. How will Ottawa choose? Apparently, very carefully. “We have to be thoughtful.  We have to find the niches. We have to find what we can really be good at globally,” he said. Even so, the prospect of any government trying to place winning bets, with taxpayers’ money in a turbulent global economy, is always controversial among economists.

“At a minimum we should be cautious about doing it,” McGill University economist Chris Ragan, a participant at today’s conference, said later in an interview. “It is hardly surprising to me that we have a minister talking about picking niches or picking clusters. Most governments, frankly, end up believing they can do things like that. Most governments fail. That doesn’t mean it can’t succeed and it shouldn’t be tried.”

The notion of fostering industrial clusters, rather than picking individual companies to support, is hardly new. It’s been championed by Harvard University’s Michael Porter for decades, including in his 1991 report for the federal government, Canada at the Crossroads.

The pressure to select certain sectors that typically rely on support from governments—in Canada and abroad—will be intense. On the same panel that GM’s Carlisle participated in, Bombardier president and CEO Alain Bellemare painted a picture of Canada’s aerospace sector up against determined competition from countries that, one way or another, lavish support on the sector.

Bombardier is currently in protracted talks with Bains over the troubled aircraft maker’s request for $1 billion in federal funding. Bains has recently signalled that the government “wants to be a partner” with the Montreal company. However, the prospect of Ottawa narrowing its focus on a few clusters worthy of particular support—and facing the inevitable political fallout from the sectors that fail to make the cut—is a different sort of policy question than addressing Bombardier’s immediate problems.

Carlisle framed it as a matter of national will. “The question we have to ask ourselves, and it’s come up at other conferences, is do we have the grit to really go after it? Do we have the sense of urgency?” he asked. “Do we feel a kind of existential threat where we really mobilize quickly enough to take advantage of the opportunity?”