Hurricane Hazel steps into the ring

Liberals hit back at Conservative claims that they’re proposing to eliminate income splitting for seniors. (They’re not.) 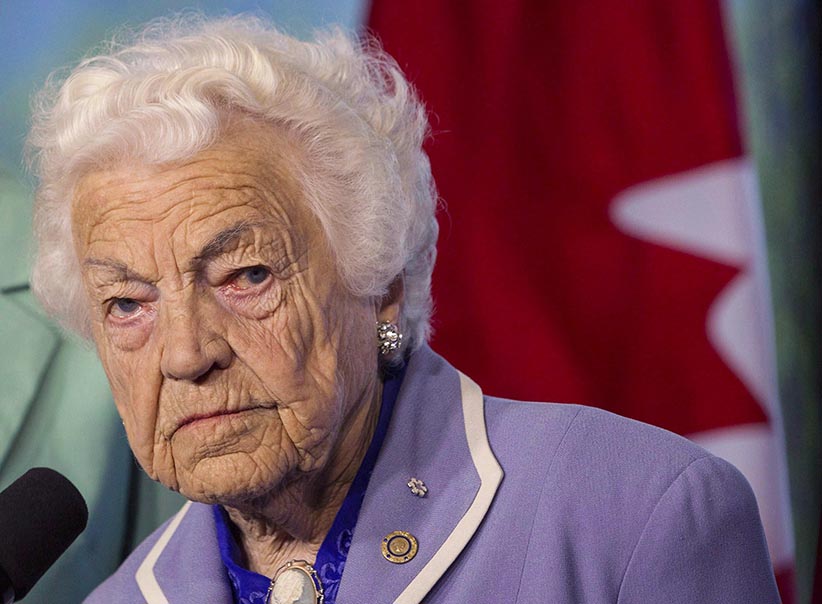 Hazel McCallion is shown in Mississauga, Ont. in a Wednesday May 14, 2014 file photo.  (Chris Young/CP)

Policy debates during election campaigns are usually a matter of duelling spin, emphasis, misdirection, bluster, and sheer dogged repetition of key points. Rarely, though, do partisan adversaries clash as directly over a plain point of fact as the Conservatives and Liberals are on income-splitting for pensioners.

Prime Minister Stephen Harper said on Wednesday, and not for the first time, that “[Liberal Leader] Justin Trudeau has vowed to . . . cut benefits Canadian seniors have come to rely on, such as pension income-splitting.” A Conservative news release went on to say that “during the election campaign, the Liberals have promised to . . . cancel income-splitting that benefits millions of families and seniors and provides up to $2,000 in tax relief.”

And today, in a novel rejoinder, the party released a half-minute online video of Hazel McCallion, 94—who retired from politics last year after a legendary run as mayor of Mississauga, Ont.—defending Trudeau on the point. “Stephen Harper’s not telling the truth [by] saying Justin Trudeau will cancel income-splitting for seniors,” McCallion says. “It’s like one of those phone scams seniors get, because Harper thinks we’re scared.”

Conservatives go to some lengths to defend their insistence that Liberals vow to do something they, in fact, consistently vow not to do. Last spring, in an interview with Maclean’s, Employment Minister Pierre Poilievre said Conservatives are justified in extrapolating from Trudeau’s policy against income-splitting for parents that Liberals must also be against it for seniors, even if they unequivocally say that’s not the case.

It is, at best, an unusual line of attack. The most obvious reason for the Conservatives to go to such lengths on the pension income-splitting issue is that they rely so heavily on voters older than 65. “The polls do show that they are stronger with older people and we are stronger with younger people,” says Ontario Liberal MP John McCallum, who happened to turn 65 a few months ago.

In an interview, McCallum conceded that Liberal candidates quite regularly hear from older voters who echo back the Tory claim about Trudeau’s policy. “To some extent, the untruth is working,” he said. “A number of seniors have mentioned that they think we are getting rid of pension income-splitting, even though we are not and, at every opportunity, we say we are not.”

Pollster Frank Graves, president of Ekos Research, has long emphasized the importance of older voters in Harper’s election successes, and says that advantage seems to be holding up in this campaign.
His most recent poll shows the Liberals leading among all voters with 34.1 per cent support, ahead of the Conservatives with 29.9, and the NDP at 24.1. But, among voters 65 and older, Ekos shows the Tories winning handily, with 40 per cent, compared to the Liberals’ 33 and the NDP’s 19.

Still, that dominant position among senior citizens hasn’t always held stable for Harper. “A lot of seniors were in the Liberal camp a year ago, but they drifted back [to the Conservatives] and they really came back after the debate about Syrian refugees and the niqab,” Graves says. Having regained that big edge among 65-and-older voters, Harper must now hold it at all costs. “There was no single demographic more important to the Conservatives in the last election; that’s where they secured their advantage,” Graves says.

And that may explain Harper’s willingness to hit hard on the pension income-splitting issue, even if his claim about Liberal policy is difficult to support. As a result, he now faces a woman known far and wide as “Hurricane Hazel,” claiming he’s behaving like a phone scammer.