If a building isn't a disaster, how can we be sure it's in Ottawa? 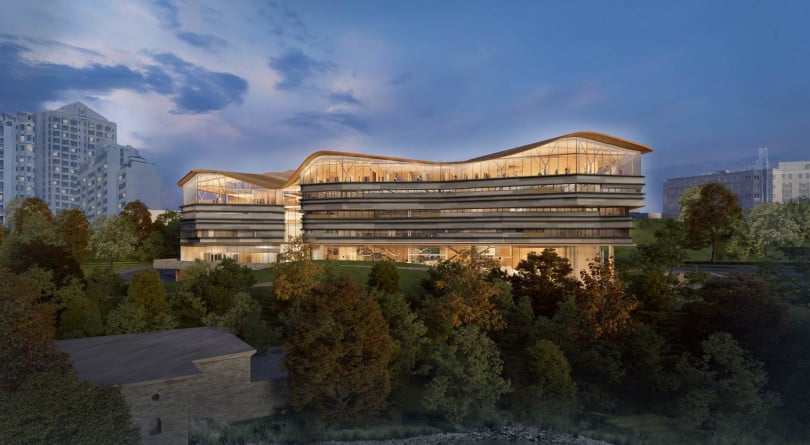 It’s difficult to attend any announcement in Ottawa for any building, monument, public enterprise or expression of collective will without feeling a nearly overwhelming sense of foreboding.

I’ve been a defender of Ottawa against those who call the country’s capital a dowdy locus of mediocrity, but lately the wreckage has been piling so high it’s hard to ignore.

The new light-rail system is already the official transit network of Murphy’s Law. The city’s only elegant hotel, a stone’s throw from Parliament, hopes to expand by welding a corrugated shipping container onto its ass.

For a minute it seemed possible to be optimistic about the future of the city’s last major central undeveloped district, an open field full of soil contaminants called LeBreton Flats, but that reclamation project’s success depended on Ottawa Senators owner Eugene Melnyk getting along well with others. Unfortunately Melnyk is what a cartoon villain would look like if all the actual cartoon villains got together to design a cartoon villain, so that didn’t work out.

So it was with a certain defensive curmudgeonliness that I showed up for the unveiling of the design for the new Ottawa library. The event had many of the hallmarks Ottawans have come to associate with disaster. Mayor Jim Watson? Check. A brochette of federal cabinet ministers? Check. A project name so ungainly Leonid Brezhnev’s Politburo would have sent it back for lacking pep? Check. The new building is called the OPL-LAC Joint Facility, because of course it is, and also because it represents a collaboration between the Ottawa Public Library and the Library and Archives Canada. What do those two institutions have in common? Creeping desperation and limited resources, mostly. Little else. Both institutions’ old digs had been going quietly to seed, so they decided to chip in together for a new facility. An unprecedented collaboration between a municipal organization and a federal organization without a provincial intermediary, Watson told the audience of Bytown swells who showed up for the announcement. Wait, was he actually bragging about an innovative combination of jurisdictions? Check.

“You’re going to see, in just a few moments, the ‘Wow’ factor,” Watson said. This sort of statement is not of a nature to mollify your latter-day Ottawan. We’re seeing a fair bit of ‘Wow’ lately already, thanks. Wow, the wheels aren’t round. Wow, the thing making that one station smell like poop is poop. Wow, they actually expect people to pay more to sleep in the shipping container.

Fortunately the project architect for the OPL-LAC JF (Opa-Lack-Juf?) is Donald Schmitt of Toronto’s Diamond Schmitt Architects. Lately Schmitt is on a roll in the capital. He designed the expansion of the National Arts Centre, which has transformed that great institution from a sullen bunker into one of the most welcoming public buildings in the country. The firm also turned the old train station into an elegant “temporary” Senate that, this being Ottawa, will certainly still be a temporary Senate long after I’m dust. And another Diamond Schmitt architect has designed a warehouse for museum-quality, but freaking huge, science and technology paraphernalia that is more interesting than you’d expect a warehouse to be.

The design Schmitt unveiled will not satisfy observers for whom a library should resemble a spaceship or a crystal or some other bold thing. It mostly looks like a library, albeit one whose undulating roof and lowish profile are designed to evoke the nearby Ottawa River and the looming Gatineau hills. We’ve seen undulation in Ottawa before, though, right across the river in Douglas Cardinal’s Canadian Museum of History. I wasn’t bowled over.

Then I remembered the hallmarks of Schmitt’s style and of the Diamond Schmitt house ethos, which favours buildings you can use, and want to be in, over iconic exteriors. From the street, their Four Seasons Centre opera house in Toronto is a bit zhlubby. But if you’re in it, it’s one of the country’s great see-and-be-seen social spaces. The NAC expansion is nice from the outside, but the inside is replete with welcoming, usable spaces, as well as the best views of downtown Ottawa in downtown Ottawa. 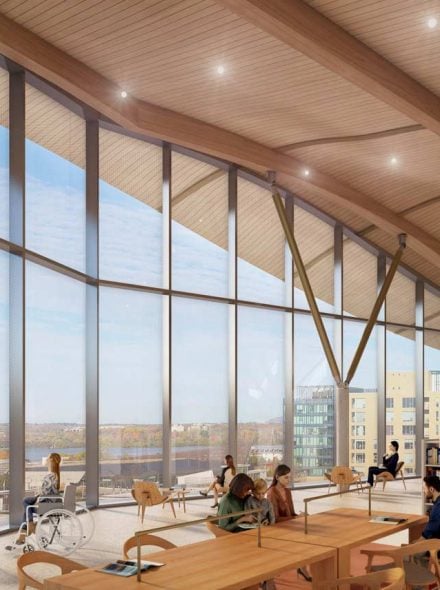 Similarly, Schmitt has saved nearly all his visual and, I suspect, emotional impact for those Ottawans who will actually go into his building, once it opens at the end of 2024. He spent 2019 running a public consultation process that opened just about every aspect of the building to question and conversation. It’s on a currently unused spit of land between Parliament Hill and LeBreton Flats, so Schmitt could basically define the space. Using simple, entertaining online questionnaires and a round of open-invitation workshops, he asked potential users how they’d approach the building; what they want to see on their way in; which facilities would matter most to them inside the building; and what they’d want to see of Ottawa when they look out its windows.

The results are—well, they’re not spectacular so much as reassuring. A big, warm atrium. Reading rooms with floor-to-ceiling windows. A gathering space on Indigenous themes, developed in collaboration with the area’s Algonquin population. More than 60 meeting rooms where the old library has only three.

I know Schmitt from his work on the NAC, and we’ve talked before about a performing-arts centre in Nunavut that his firm developed in close consultation with area Inuit. He takes consultation seriously, starts it early and lets it guide decisions. The maze of influences and competing interests around the latest project—national archive, municipal library, Indigenous past, uncertain future—became the fabric of the project. The result is a building that, at first glance, suggests it will work best when you’re actually in it. Unlike the light rail.