'I'm a Laytonist': In the shadow of the late NDP leader

Jack Layton's old campaign signs are popping back up. His words are being printed on T-shirts. Why the late NDP leader still resonates this election campaign 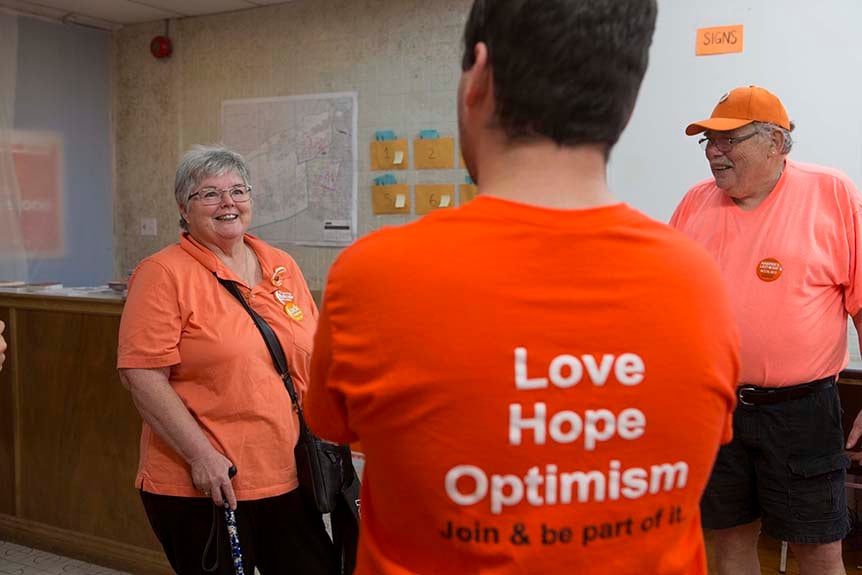 Pat File canvasses with a cane at hand, but she hardly leans on it. The rubber knob at the end of the stick tappity-taps through wet boulevards, a metronome for her fellow volunteers, who spill over the curb for lack of space on the sidewalk and a scarcity of cars on the evening road. “I’m a little dynamo,” she says, undefeated by her double knee replacements.

“Can we count on your support?” she asks residents at their doormats. “Can we put a sign on your lawn?”

When the team of three turns away from each porch, voters see three words on the back of their T-shirts—love, hope and optimism—the virtues their former leader espoused to all Canadians. “I keep Jack as close as possible,” says File, 66, who wears Layton buttons year-round. “He’s the fire in my belly, and I want to pass it on.”

This crew of New Democrats, volunteering for first-time candidate Alex Johnstone in Hamilton, feel Layton’s impact through each facet of their campaign. “Nothing galvanizes our team like the words of Jack,” says Jesse Michor, Johnstone’s campaign manager. “Alex grew up on Layton, and she insisted on the T-shirt design.”

Layton’s commitment to young people has brought the campaign high-school-aged volunteers who remember him attending their band performances, and his commitment to engaging everyone has spurred them to tackle voter apathy in a near-24/7 fight. (Perhaps fittingly, their office is a former karate studio.)

Elsewhere, Layton remains a potent inspiration. In ridings throughout the country, NDP pamphlets show Layton’s photo as a backdrop to one of Mulcair. Jacqui Gingras, the New Democrat candidate for North Okanagan—Shuswap in B.C., credits Layton as the inspiration for her entire campaign: “This is the work to which Jack was so dedicated. This is the work that I continue in his name.” Other candidate offices have tacked Layton posters onto their walls. Bill McBain, campaign manager for Andrew Foulds in Thunder Bay- Superior North, still has Layton’s number in his BlackBerry. “He’s very much a part of this election,” says McBain. “I’ve yet to hear a candidate’s speech that doesn’t include him.” 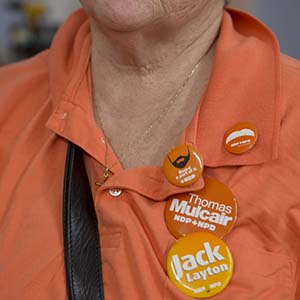 Voters, too, have Layton on their minds. One Torontonian saved a Jack Layton campaign sign from 2011 and reposted it on his  lawn last month. On the anniversary of the leader’s death on Aug. 22, Canadians used up buckets of chalk at memorial sites, writing tributes such as: “Jack was the reason I started voting,” and, “I resolve to be more informed about what is happening.”

When the Johnstone team began wearing their Love-Hope-Optimism shirts, supporters immediately wanted to buy their own. “People were making me take down their contact info to order them,” says volunteer James Ankers. He says people they meet at the doorsteps also share their memories. “Everyone has a story about Jack. Even people who didn’t end up voting for him still liked him and tell us they miss him.”

Indeed, Layton inspires non-partisan voters in the same way. Leigh Bursey, a city councillor in a predominantly conservative region of Brockville, Ont., tattooed Layton’s final words about love, hope and optimism on his arm. “I’m a Laytonist,” he says. “My heroic Jack was the man who told me I would make it in politics. He’s a part of everything I do.” When asked on Facebook about Layton’s impact, people mention he encouraged them to talk to each other while waiting in airport security lines, to petition for the homeless, to ride bikes. Echoing Layton, Bursey says, “before we’re partisan, we’re Canadian.”

In Hamilton, as the windows begin going dark, File and the Johnstone campaign team turn back. “That lady was in her jammies,” she reports after knocking at one household winding down for the night. She drives home and writes in her daily journal, in which she has taped Layton’s last letter to Canadians on the first page. “He was such a good man. He was in pain towards the end, but he never leaned on his cane. Oh, it makes me cry,” she says. And then, she does.