In all thy kids command: Canada's political families

While they’re not as famous (nor successful) as in the U.S., there is no shortage of political families in Canada 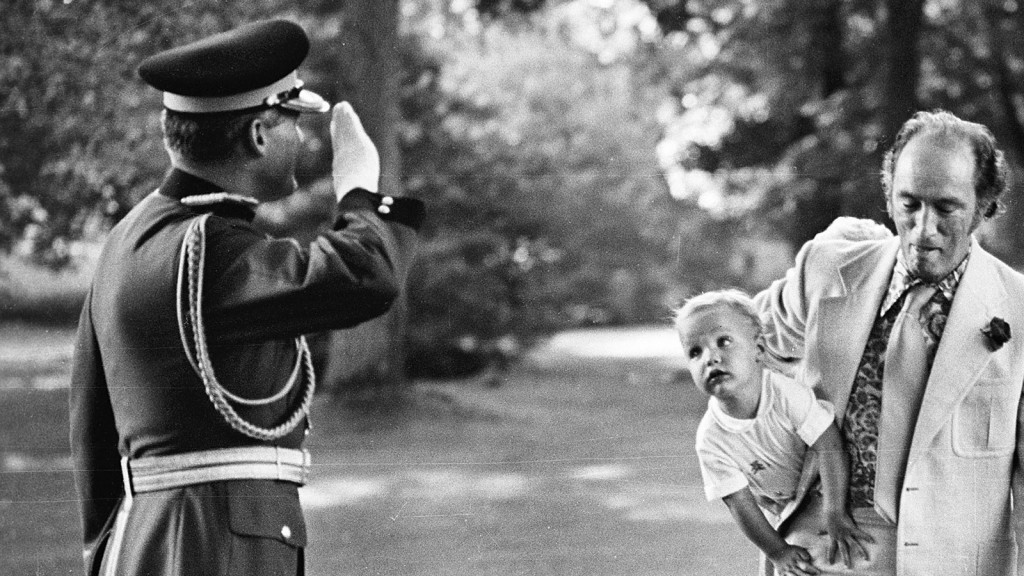 Pierre Trudeau is saluted by RCMP Officer as he carries son Justin to Rideau Hall in 1973 to attend an outdoor reception for visiting heads of the Commonwealth countries in Ottawa.(Peter Bregg/CP)

Geoff Regan’s last name might have given him a boost when he won his first election in 1993. Regan is the MP for Halifax West, a former federal fisheries minister who hopes to win an eighth term in office later this year as part of Justin Trudeau’s Liberals. Geoff is also the son of former Nova Scotia premier Gerald, himself a cabinet minister when another Trudeau was prime minister. Dad’s advice meant Geoff “picked up a few pointers over the years around the dinner table,” and that last name offered the younger Regan a dose of recognition when he sought his party’s nomination. “Liberals believed it would help at the ballot box, which I think it did,” he says. Still, Regan took nothing for granted. “It was also important that I demonstrated to other party volunteers, over the 18 or 19 years prior to ’93, that I was a hard worker and happy to wash car windshields, put up posters, stack chairs, build signs, or do whatever else I was asked to do.”

Related: Beyond Bush and Clinton, America’s politics have become a family affair 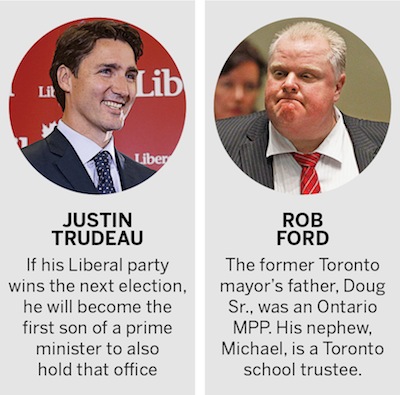 Regan is one of myriad sons and daughters of Canadian political families—kids who learn the ropes by watching their parents and who aspire to similar success. While not as well known as America’s dominant political dynasties, examples can be found in most council chambers and legislative assemblies across the land. Just look at a list of former premiers: W.A.C. Bennett, British Columbia’s longtime Social Credit premier, gave way to his son, Bill. Hugh Flemming followed his dad, James, in New Brunswick. In Prince Edward Island, Robert Ghiz came after Joe. Both Pierre-Marc Johnson and his brother, Daniel, served stints as Quebec premier, an office held by their father, Daniel, Sr. None represented the same political party. Rachel Notley, Alberta’s brand-new premier, is the daughter of Grant, a leader of the provincial New Democrats—never premier, but very popular—until his death in 1984.

Regan’s colleagues in the House of Commons include Dominic LeBlanc, the son of the late governor general Roméo LeBlanc, and Peter MacKay, the Nova Scotian conservative whose father, Elmer, faithfully served in Brian Mulroney’s cabinet. The elder MacKay’s Tory colleague, Robert Layton, was the father of former NDP leader Jack. Jack’s son, Mike, is a Toronto city councillor. And there’s another Mike with an infamous last name making his mark on Toronto’s municipal scene: the school trustee whose surname is Ford. 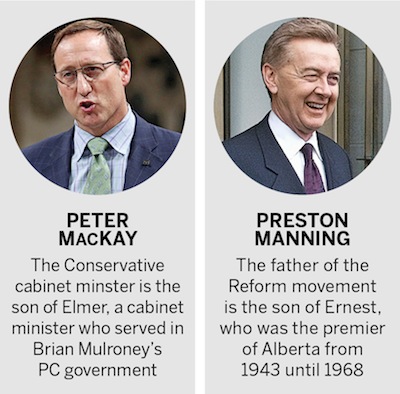 These sons and daughters span the political spectrum. Much divides them, but the most ambitious have shared mostly the same fate: failing in their bids to become prime minister. Preston Manning, the father of the Reform movement and son of generational Alberta premier Ernest, couldn’t topple Jean Chrétien’s Liberals in two tries. Jack Layton’s four elections as leader came closer each time, but still fell short. The lone exception is former prime minister Paul Martin, whose father lost three campaigns for the Liberal leadership and who served as a cabinet minister for parts of three decades.

Canadian political families may be unique in this leadership drought. Former U.S. presidents John Adams and George Bush both paved the way for their nearly identically named sons. The Nehru-Gandhi family is legendary in India. In Japan, where prominent families dominate the upper echelons of politics, prime ministers seem predestined based on their bloodlines. Yukio Hatoyama, the country’s prime minister in 2009-10, followed grandfather Ichiro, who’d served the same role from 1954 to 1956. Nobusuke Kishi, Ichiro’s successor, is the grandfather of current Prime Minister Shinzo Abe. And Abe’s predecessor, Junichiro Koizumi, was grandson of Koizumi Matajiro, a prominent Japanese politician until shortly after the end of the Second World War. 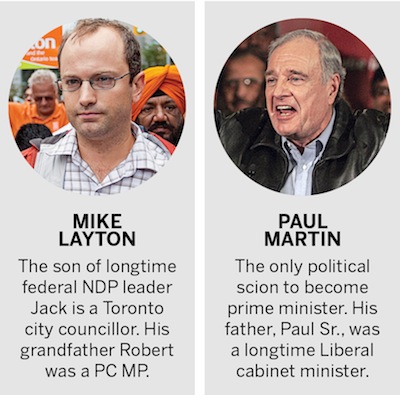 Political scientists have a hard time explaining why no prime ministerial offspring has risen to the ultimate job. The University of British Columbia’s Fred Cutler, a specialist in political behaviour, cheekily suggests that no one has ever surveyed voters about the likelihood that they’ll vote for candidates based on the records of their powerful parents. Stewart Hyson, a University of New Brunswick professor based in the same province as the powerful Irving family, says the business world lends itself to family dynasties more easily than politics does. “It is relatively easy for an entrepreneur to pass on some financial responsibilities to family members and to nurture them,” he says. “In politics, although being part of a political family can be a benefit, it is ultimately necessary to carve one’s own base of popular support.”

It’s now up to the younger Trudeau, the beneficiary of what’s indisputably a household name, and the latest in a long line of political kids who’ve grown up hungry for power, to prove that a famous parent isn’t the kiss of death for a wannabe prime minister.