Immigration Minister Chris Alexander is up against his arch-enemy Mark Holland. It's a fight everyone’s watching. 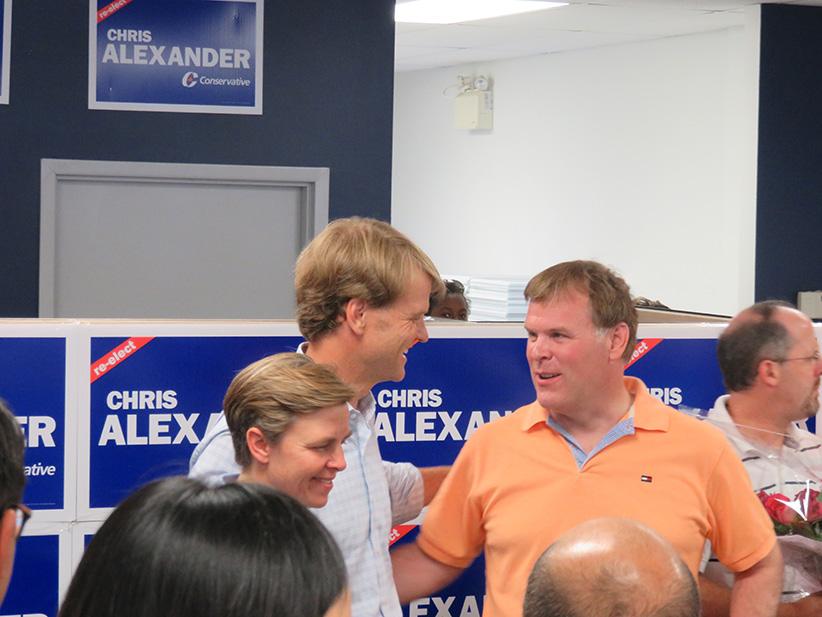 Despite everything, Chris Alexander still looks the part of the political golden boy. At the official launch of his re-election bid last Saturday afternoon, Alexander stood near the back of his storefront campaign headquarters in a strip mall in Ajax, Ont., a trim 46-year-old in an open-necked white shirt, with a pale Tory-blue check, his three-year-old daughter, Elisabeth, sporting a pink backpack, in one arm. She stayed put while he rallied a roomful of volunteers with a speech that deftly mixed the lofty and the local. As a former diplomat now serving as citizenship and immigration minister, he touted Stephen Harper’s record on global security as highly principled. But, as MP for this bedroom community just east of Toronto, he talked up millions in old-fashioned federal spending on local infrastructure, including a big new pool complex.

For all Alexander’s poise, though, it wasn’t hard to detect a certain tension in the chatter among his supporters. Back in 2011, when he came to them as a star Conservative recruit, he was admired all over as an Oxford-educated paragon of foreign-service polish, following a stint as Canada’s extraordinarily young ambassador to Afghanistan—just 34 when he was appointed in 2003 to that challenging post. Now, less than five years after winning his seat in the House, he’s earned a very different sort of reputation as a partisan brawler. His opponents loathe him and some pundits have sharply criticized him. As recently as June, for instance, Alexander lashed out at the Liberals in an angry question period exchange as “the racist party in this Parliament over decades.” He supported the incendiary charge by casting back to former Liberal prime minister William Lyon Mackenzie King’s restrictions on Asian immigrants, and also cited immigration backlogs under Pierre Trudeau and Jean Chrétien.

So, when Liberals muse about unseating Alexander, a hungry gleam comes into their eyes. It was the other way around in the last campaign. In 2011, the incumbent in Ajax (then called Ajax–Pickering, before riding boundary revisions) was Liberal Mark Holland, who was something of a boy wonder himself when he was first elected MP at just 29 in 2004. Holland held the riding when Harper’s Conservatives won the 2006 election, throwing himself into the role of opposition attack dog. Liberals called him a rising star for the way he got under the skin of senior Tories; Conservatives designated him the Grit they most wanted to send packing. Alexander did just that in 2011, beating Holland by a six per cent edge in the local vote—a solid victory, but much closer than the 19 per cent margin by which the Conservatives bettered the Michael Ignatieff-led Liberals in Ontario as a whole.

The grudge rematch between Alexander and Holland is sparking intense interest among party insiders. (In this seat, the NDP, which is in the thick of the fight elsewhere in Ontario, isn’t seen as seriously contending; the New Democrat candidate took less than 15 per cent of the 2011 vote. ) Signs of national attention are already unmistakable. On Monday of this week alone, Holland stood just behind Justin Trudeau during a morning news conference in an Ajax backyard, and Alexander walked with Harper into a rally that evening at a Toronto Hindu temple. 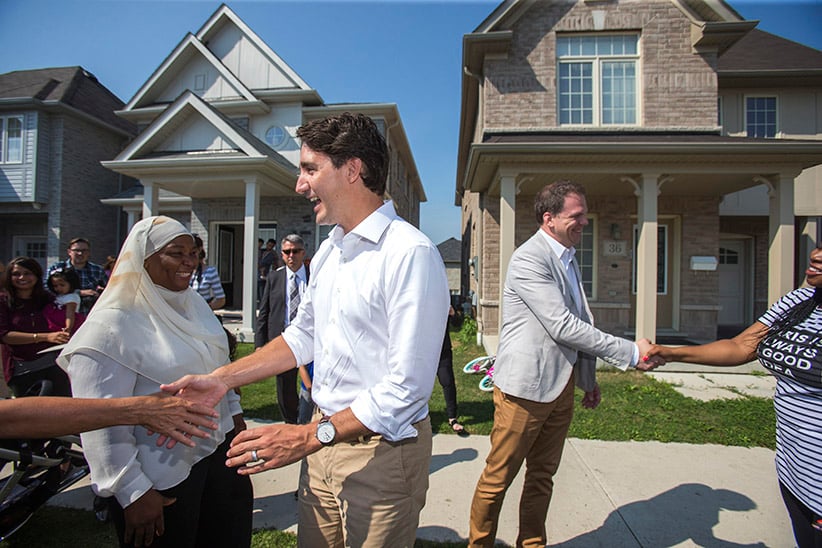 It’s more than a matter of Harper shoring up one impact player while Trudeau tries to return another to Ottawa. No matter who was runnning, Ajax would represent a particularly prized sort of constituency—a classic suburban seat. About three dozen ridings are at stake in the sprawl around the country’s biggest city, not counting the 11 in central Toronto. Last time out, the Liberals were decimated in both zones, as the NDP made breakthroughs downtown and the Conservatives cleaned up in the burbs. All three of the major parties must view Ontario’s 121 ridings, especially those clustered around Toronto, as essential to their chances of success on Oct. 19.

And winning immigrant support is key to capturing many of those seats, including Ajax. Organizers for Alexander and Holland tend to divide the riding roughly in two, with Canadian-born voters concentrated in longer-established neighbourhoods south of Highway 401, toward Lake Ontario, and immigrant families in tracts of newer housing north of the highway. Since Harper appointed him immigration minister in the summer of 2013, Alexander has become the Prime Minister’s point man on hot-button issues among newcomers. That includes the Citizenship Act passed last year, which requires those seeking to become Canadians to show they’ve lived here longer, met language requirements, and passed a test proving knowledge of Canadian society. Controversially, the act also gave the government the power to revoke the citizenship of dual nationals convicted of serious crimes such as terrorism.

Holland says a “huge piece” of his motivation for attempting a comeback is Alexander’s policy record. “I’m sure Chris is a wonderful person as a human being,” Holland says. “[But] I think he’s been a horrific immigration minister.” Holland singles out the Harper government’s move—vigorously advocated by Alexander—to strictly limit federally funded health services available to refugee claimants, as they wait to see if they will be allowed to stay in Canada. He also points to Alexander’s outspoken defence of the Tory policy against allowing a woman to wear a veil while taking the citizenship oath. Both policies are the subject of court battles. “I think the positions he’s taken are indefensible,” Holland says.

Related: A federal judge weighs in on refugee health care

Not surprisingly, Alexander isn’t backing down on any of the positions he’s staked out on Harper’s front bench. Still, he doesn’t see them as key local election issues. He says the Citizenship Act, for instance, rarely comes up on the doorstep. In fact, he doesn’t list any of his own files among the top reasons he expects to hold the seat. Instead, he points to infrastructure spending in the riding, such as the $5 million Ottawa put into refurbishing an Ajax ballpark for the recent Pan Am Games, and tough-on-crime laws that result in longer prison sentences, which he says are popular “virtually as a matter of consensus” throughout the riding. Even more, however, he regards the tax cuts and child benefit increases Harper announced last fall as vote-winners. He hears about them often when he goes door-to-door. “When the undecided voter is saying, ‘I’m ready [to vote Tory],’ the family tax cut is probably the decisive factor,” Alexander says.

Related: Read our in-depth primer on taxes, and 11 other election issues

He’s referring to the tax credit Harper announced last year that lets the higher-earning spouse in a couple with kids to transfer up to $50,000 of taxable income to the lower earner, so that income is taxed in the lower bracket, up to a saving of $2,000. The Liberals would get rid of income splitting for parents, but Trudeau promises to trim the tax rate on income between $44,700 and $89,401 to 20 per cent from 22.5 per cent, cutting taxes collected on earnings in that range by about $3 billion, and paying for it by hiking the rate on Canadians making more than $200,000.

Related: The surprising spoils of income-splitting

Competing tax and beneﬁts platforms may go a long way to determining the election outcome, not only in Ajax, but in dozens of other suburban ridings where the votes of budget-conscious parents matter most. Alexander says pocketbook issues resonate far more than his own changed image. He shrugs off negative reaction from some columnists and editorial writers over comments such as his charge that Liberal immigration policy was historically racist, or his provocative observation, in an interview about those more stringent citizenship rules, that Canadians “don’t want their co-citizens to be terrorists.” He dismisses any criticism as being less about him than a symptom of bias against his party. “I have never had a stronger sense that mainstream media, national media, were predisposed against our message,” he says.

How fairly journalists cover parties is debatable. What isn’t in doubt, though, is that reporters being fed a steady diet of predigested sound bites by the national campaigns relish the unpredictability of two excitable scrappers going at each other locally. Expect to see Ajax much in the spotlight until election day.