In the Trudeau government, what's a cabinet shuffle for?

Paul Wells: Like the shuffle before it, today's won't change anything about a government that's chronically stage-managed by a tiny cadre of staffers 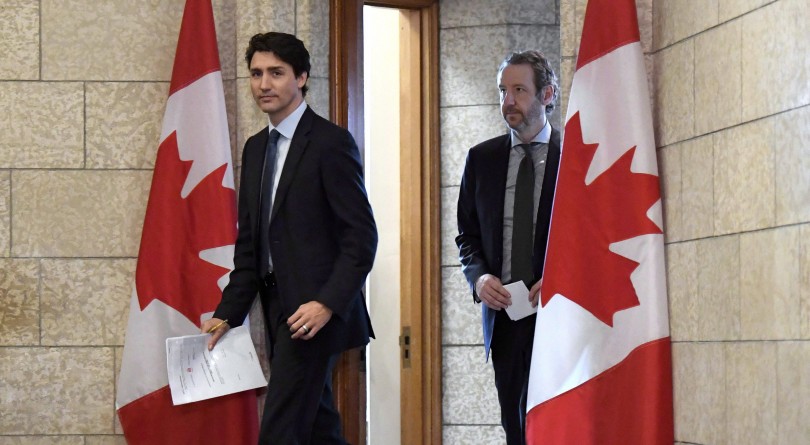 Trudeau leaves his office with his principal secretary Gerald Butts to attend an emergency cabinet meeting on Parliament Hill on Tuesday, April 10, 2018. (THE CANADIAN PRESS/Justin Tang)

The main thing to remember about today’s cabinet shuffle is that, outside of the extraordinary tales it tells us about the career paths of its protagonists, as a matter of governance it could well be close to pointless. As evidence, I invite you to tell me who got moved in Justin Trudeau’s previous cabinet shuffle, six months ago.

At the time, I delivered the requisite amount of excitement at the news that Bill Blair was now in charge of—and just now I had to Google him to jog my memory—Border Security and Organized Crime Reduction, which of course nobody should take as any kind of admission that there is any connection between organized crime and border crossers; how could you think that? It’s just two halves of the same minister’s title. And also at the news that Dominic LeBlanc was now the Minister of Intergovernmental Affairs.

With hindsight we see that there has been no change on the border-crosser file, nor on the state of organized crime in Canada, that can be traced directly to Blair’s term as a cabinet minister. We also see that Canadian federalism is not wildly more productive or less acrimonious today than it was the day before LeBlanc became its steward.

This is no knock on the ministers involved, who are serious people. But it’s hard to budge the trajectory of state from even a post as exalted as a seat at the federal cabinet table. And harder if the government is, as is becoming increasingly obvious to all observers, chronically stage-managed by a tiny cadre of out-of-their-league staffers operating out of the Building Formerly Known as Langevin.

READ MORE: Trudeau on the cabinet shuffle, including today’s big move up—and down

What problem in the land is LeBlanc authorized to exercise autonomous authority to fix? If Blair were to hop a cab to Ottawa airport today and catch a flight to some border security or organized-crime hotspot, where would he go? To what end?

Moving, at last, to today’s shuffle, I’m actually willing to believe that Jody Wilson-Raybould has not been demoted from Justice to Veterans’ Affairs. Or at least that the point of the move was not to demote her, but to deploy her demonstrated skill at de-escalating drama to a portfolio that’s lately in serious need of de-escalation. The Trudeau Liberals must be amazed to discover the veterans’ file is a problem for them, after they had spent their later opposition years, say 2013-2015, telling themselves any fool could do better than the Conservatives on the file. Seamus O’Regan leaves the department as, to be polite, a fixer-upper, and Wilson-Raybould might have the skill set that could allow her to improve things.

I really wonder whether there’s any hope of that given the habits of the current PMO. Wilson-Raybould would need to be able to meet with veterans’ groups and have them regard her as a real interlocutor, capable of backing her promises with action, free to improvise and deliver change. In real life, she’d have to send her proposed changes back to the PMO, which would, weeks or months down the line, send watered-down variations of her proposals back, along with approved communications language that, if used, would leave anyone sounding like a zombie. Sooner or later her stakeholders would realize they weren’t talking to a minister, they were talking to a machine whose bulk was mostly hidden offstage and whose highly-constrained emissary was Jody Wilson-Raybould.

Certainly the new assignment does not seem to have thrilled her. The long statement she released within hours of being sworn in, reminding everyone of her accomplishments at Justice, sure reads like an expression of frustration. Trudeau cannot have set out to upset her—and we should all remember that he wanted no part of this shuffle, which was prompted by last week’s announcement from Scott Brison that he’s leaving politics—but he’s developing a real knack for putting noses out of joint. He opened 2017 by sending Stéphane Dion to the European Union, which prompted Dion to vanish from public sight for weeks and the EU to take the unprecedented step of signalling that it couldn’t guarantee he would be accepted as an ambassador. This is the kind of mess Trudeau’s office stirs up when they think they are being clever.

READ MORE: Jody Wilson-Raybould on her exit as justice minister

Meanwhile, if we’re correct to guess that Wilson-Raybould has been sent to patch a Seamus O’Regan-shaped hole at Veterans’ Affairs, it’s hard to muster a lot of enthusiasm for O’Regan’s future at Indigenous Services. The rapid climb of Jane Philpott, about whom more in a minute, is one thing. But she doesn’t just go to new jobs, she leaves old ones behind. And Trudeau’s office seems little interested in assigning her old jobs to talents as impressive as Philpott’s, perhaps because there are none. I really think it’s possible O’Regan has been underestimated. But he’d need to be a superman to escape the fate of the last minister who filled a gap left by a Philpott promotion, Ginette Petitpas Taylor, whose influence over the Health portfolio cannot be measured by teams of scientists operating with sensitive equipment in underground caverns.

David Lametti could be an effective Justice minister! He has a sterling CV. He’s an easy guy to like. He has about five months to leave his mark before all of federal politics devolves into campaign-season silliness. How much latitude will he have? Trudeau told reporters before Christmas he has no intention of reducing mandatory minimum sentences imposed by the Conservatives, a promise that’s too delicate to keep in an election year.

This leaves Philpott. Just about all of the trouble I’ve surveyed here—O’Regan to Indigenous Services, Wilson-Raybould to Veterans’ Affairs, a rookie to Justice—would not have been necessary if Trudeau hadn’t decided Philpott was the best replacement for Brison at Treasury Board. She’d better be worth it.

She may be. Philpott’s on the very short list of ministers whose authority is essentially unquestioned in Ottawa, inside and outside the Liberal Party. Ralph Goodale is on that list. Chrystia Freeland, perhaps. That’s the end of the list. But a leading theory to explain Brison’s departure is that he discovered he couldn’t actually get much done at Treasury Board. Constrain the PMO’s fondness for hosing billions of dollars around without a plan? Introduce some order into decision-making? Take power out of the hands of Trudeau’s sorcerer’s-apprentice palace guard so it could be exercised by really anybody else? Brison couldn’t.

Philpott won’t either, if Trudeau doesn’t want her to, if he thinks the administrative bottlenecks, odd fondness for bad communications and preening moral self-regard that have come to characterize his government are either excellent features or flaws that can’t be fixed in an election year. But there’s another possibility. It’s that Philpott has, or might soon be given, a mandate to rationalize government operations across the board, to improve workflow and deliver more autonomy to ministers’ offices and to the public service, at the overdue expense of the PM’s personal secretary, Gerald Butts, who has hoarded decision-making to the detriment of proper management across the government.

In this vision, Philpott would become an executive deputy Prime Minister without the title, the most powerful treasury board president since Marcel Massé in the aftermath of the 1995 Quebec referendum. She would instill a measure of order in place of chaos, much as Leon Panetta did as Bill Clinton’s second White House chief of staff after Clinton’s first presidential term had already fallen prey to drift and infighting.

I mean, it’s possible, but I would put the likelihood of all this happening at close to zero. The Liberals are well and truly hunkered down in pre-election mode, chippy and defensive, sure they deserve to be re-elected, uncertain what to make of polls giving them a real but not insurmountable advantage. Probably Philpott’s move is as rushed and symbolic as so many of this PM’s ministerial assignments have been. Probably the real power, like the increasingly apparent problems, will continue to reside in a very small number of unelected staffers, whose advantage is that the PM cannot imagine shuffling them.

“Fives hire fours,” Butts used to say of Trudeau’s management style, “but nines hire tens.” It was a spectacularly self-flattering turn of phrase, and it leaves unanswered which number we should assign to a prime minister whose government has become so mired in routine and deadlock that it’s impossible to know who’s a four and who’s a ten, because they all deliver the same results.