Indian spies did it, and other Ottawa conspiracy theories

Terry Glavin: With the PM's endorsement, a hackneyed and reckless Indian spy-story genre is suddenly flourishing in and around Ottawa 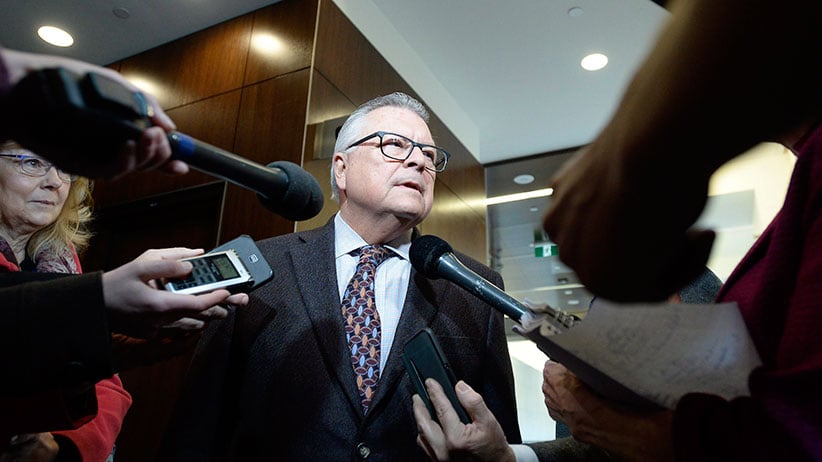 Minister of Public Safety Ralph Goodale speaks to reporters as he arrives to appear before the Standing Committee on Public Safety and National Security, in Ottawa on Thursday, March 1, 2018. (THE CANADIAN PRESS/Justin Tang)

By weaving the tangled web of a conspiracy theory that implicates rogue elements or some sort of faction within India’s intelligence agencies in the humiliations he endured during his Feb. 17–25 misadventures in India, Prime Minister Justin Trudeau has not only severely strained relations between Ottawa and New Delhi. He’s also drawing dangerously from a hackneyed Indian spy-story genre that ordinarily flourishes only in the most quarantined spaces at the dodgiest outer limits of public debate.

With Trudeau’s celebrity endorsement, the current fashion in paranoia has now subjected Andrew Scheer’s Conservative Party to the accusation that shadowy foreign forces were holding the pen in an Opposition Day motion that was to be put to the House of Commons last Thursday. After protests by a Sikh advocacy group, the motion was suspended at the last moment.

Public Safety Minister Ralph Goodale, meanwhile, has left a cloud of suspicion hanging over the head of Surrey Centre Liberal MP Randeep Sarai. Asked directly last week whether Sarai had acted as some kind of operative in the black-ops version of events that Trudeau appears to have endorsed, Goodale said he couldn’t answer, owing to national security concerns.

In a surreal turn of events, Sarai himself then showed up in the corridor just as Goodale was extricating himself from the crush of the Parliamentary press gallery. Sarai was asked: “Are you part of the rogue elements?” Sarai responded: “No.”

It was quite the spectacle. An MP from a governing party was obliged to defend himself against charges that he’s an asset in some wildly speculative foreign espionage gambit that his own prime minister appears to believe in, immediately after the public safety minister in his own government assiduously avoided vouching for his patriotic bona fides.

The mania is also adding a new chapter to the motherlode of all India-Canada conspiracy theories—the one that situates Indian government agents as the culprits in the Air India bombing that took the lives of 329 people in 1985. And it’s reviving questions about why New Democratic Party leader Jagmeet Singh has consistently refused to renounce the weird cult-like following of Talwinder Singh Parmar, the bloodthirsty leader of the Babbar Khalsa terrorist group who was identified by the B.C. Supreme Court and a federal judicial inquiry as the mastermind behind the Air India atrocity.

During his run for the NDP leadership last year, Jagmeet Singh, who has been denied a visa to visit India, said that he was attempting to assemble witnesses to prove his claim that a foreign government was actively applying pressure to dissuade New Democrats from supporting his leadership bid. In a controversial interview with the CBC’s Terry Milewski last October, Singh repeatedly dodged questions that Milewski has routinely put to politicians down through the years about associating with far-right Parmar cultists and showing up at ceremonial events with Khalistani paraphernalia on open display.

Refusing several opportunities to distance himself from posters and propaganda that present Parmar as a heroic Sikh martyr—Parmar was killed in an encounter with Indian police in 1992—Singh eventually declared that he didn’t know who was responsible for the Air India bombing, but “we need to find out” who it was. “We need to make sure that the investigation actually results in a conviction of someone who is actually responsible.”

A Parmar follower, Inderjit Singh Reyat, was convicted on charges of making the bomb that blew up the Air India plane in the skies off Ireland, and another bomb that detonated during an Air India flight stopover at Narita Airport in Japan, killing two baggage handlers. He was also convicted on charges of perjury after he deliberately misled the courts to protect his collaborators. Reyat was released after 30 years in prison, two years ago.

Milewski’s questioning provoked a sharp reaction from Jagmeet Singh and his supporters, who suggested the line of questioning was racist, inappropriate or at the very least wholly irrelevant—even though Singh’s B.C. campaign headquarters was in the same complex in Surrey as the Dashmesh Darbar temple, where Parmar is openly lionized as a martyr to the Khalistan cause—and the Air India bombing is held to have been a false flag operation pulled off by Indian counterintelligence operatives.

This latest go-round with Indian spy stories all began when Trudeau’s national security and intelligence advisor Daniel Jean was called upon to explain to journalists, on background, just how it was that Jaspal Atwal, a former terrorist group member and convicted would-be assassin, had ended up invited to at least two official Team Trudeau events in India. Atwal is a former member of a proscribed terrorist group devoted to wrenching an independent Sikh ethnostate called Khalistan from India’s Punjab province. After serving a prison sentence for attempting to murder Punjab cabinet minister Malkiat Singh Sidhu in 1986, Atwal went on to become a prominent figure in Liberal Party circles in suburban Vancouver.

Jean’s astonishing story was that some kind of Indian counterintelligence operation was behind Atwal’s presence at a Trudeau reception in Mumbai, where Atwal posed for photographs with Trudeau’s wife Sophie Gregoire, and that the spies were also somehow responsible for getting Atwal invited to a Canadian High Commission event with Trudeau in New Delhi.

The story started to unravel straight away. Atwal’s name had not been suddenly and mysteriously lifted from an Indian government visa blacklist after all. He’d travelled to India several times in the preceding years. His name appears to have been formally lifted from India’s visa blacklist in 2016. Initially, a spokesman for Trudeau distanced the prime Minister from the spy story, and Randeep Sarai took full responsibility: “I alone facilitated his request. . . I should have exercised better judgment, and I take full responsibility for my actions.”

But then, last week, in the House of Commons, Trudeau said a senior security official would circulate such a story only “because they know it to be true.” India’s External Affairs Ministry responded furiously, calling the spy story “baseless and unacceptable.” Now, the Canadian Sikh Association has weighed in with a version of events that goes further, proposing that Andrew Scheer’s Conservatives are dupes of shadowy foreign forces.

The motion the Conservatives were preparing to put to the House last week was both anodyne and potentially incendiary. Prepared in foreign affairs critic Erin O’Toole’s office, the motion begins by calling on all MPs to acknowledge the contributions of Indo-Canadians, and especially Sikhs, to Canada’s national life, and concludes by calling on MPs to stand for a united India. But in between, the motion calls on the House to condemn all terrorism, including the Khalistani variety, and also calls on MPs to condemn the “glorification of any individuals who have committed acts of violence” in the Khalistani cause—something the NDP’s Jagmeet Singh, particularly, has gone out of his way to avoid.

O’Toole said the motion was set aside at the last minute because “the story’s still evolving.” But the Canadian Sikh Association claims its after-hours lobbying efforts were responsible for killing the motion, that the motion was all about “labelling our community as terrorists,” and that it was drawn up in the first place “at the request of foreign and corrupt entities.”

To Hindustan Times columnist Anirudh Bhattacharyya, the paranoia in and around Ottawa these days is a sign of the times. Regardless of the facts, “in this age of fake news, other versions of reality go viral.” Conspiracy theories are commonplace in Indian popular culture, and conspiracy theories routinely float around the margins of Canada’s Sikh community. This time around, something is different.“When the Prime Minister of the nation plays along,” Bhattacharyya wrote this weekend, “it only leads to the mainstreaming of the fringe.”