Instead of policy, Gerald Butts and David Axelrod ponder the meaning of political life

The PM's advisor and the former advisor to Barack Obama met at the Liberal convention to talk about their lives, jobs and the value of attack ads 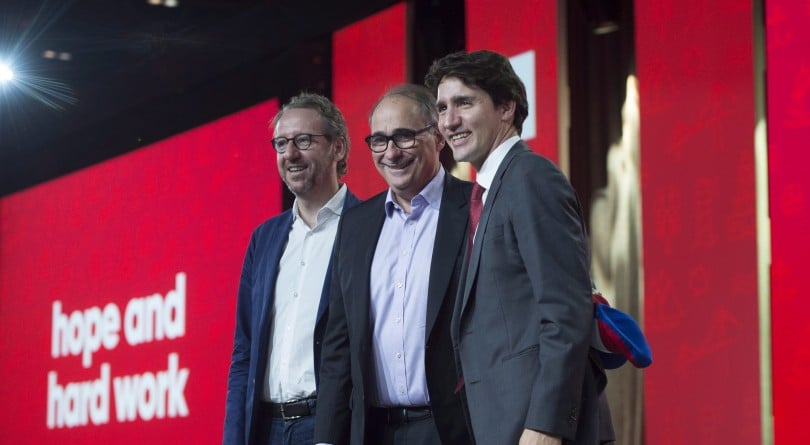 On Friday night, two policy advisors had a think for all to hear. On stage at the national Liberal Party convention in Halifax, Principal Secretary to the Prime Minister, Gerald Butts, appeared in conversation with David Axelrod, former policy advisor to Barack Obama.

The advisors focused on their fathers, their most poignant memories in power and the existential query of why their work has a point. They did touch on attack ads and advice for an incumbent government, but for most of their 45 minutes, two of the most senior political strategists in North America, instead of strategizing, stepped back.

“I think the countries that create circumstances where people like you and me,” said Butts, “can be born where we’re born and grow up to do things like this are really precious, and they’re really rare, and if we’ve learned anything in the past few years in global politics, it’s they can also be assailed, and they need to be defended.”

They noted how easily they can get disconnected from citizens, as Axelrod compared the White House to a submarine from which he felt he was peering at the country through a periscope. Yet, every once in a while, he felt in touch—overwhelmingly so, on the night the Affordable Care Act passed in 2009. Axelrod went to his office in the White House as the final votes came in.

“I closed the door, and I sobbed,” he told Butts. “I just broke down, and I cried, and I cried in part because I have a child with a chronic illness, epilepsy. When she was a child she started seizing at seven months old. I was a young newspaper reporter. Her seizures, we couldn’t get them stopped for 18 years, but at that time I was making a modest salary and her insurance wouldn’t cover the treatment she needed or the medication, and we almost went bankrupt. And I cried because I realized other families wouldn’t have to go through what my family had gone through.”

READ MORE: Sophie Grégoire Trudeau’s convention speech: ‘You can count on us, Justin and I’

Butts brought up his father as a coal miner of about 40 years in Glace Bay, N.S., and Axelrod profiled his own, who immigrated from eastern Europe and moved to the Bronx with his family at age 12. Axelrod recalled once joining Obama in Russia for bilateral meetings, lined up with dignitaries on the eve of what would’ve been his father’s 99th birthday, listening to the army band play the American anthem.

“I stood there,” Axelrod said, “and I thought about the fact that he and his family fled all those years ago, and they came to the United States because they had hope. It represented hope for the future, and that hope was realized, and here I was back in eastern Europe as the senior advisor to the President of the United States, and I was so moved by that. And whatever flaws there are in my country—and I’m sure you feel the same way; we’re always trying to perfect our unions—but there’s so much to fight for.”

Butts asked his advice for fighting in the next election, as an incumbent government that is trying to do big things well. “There are dark forces in our politics now, and sometimes they arrive in stealthy ways,” Axelrod said. “You have to be prepared to push back.”

When Butts asked him to define “attack ad,” Axelrod said incumbent governments must tell the electorate what their opponents are doing. “That’s not to say that politics of destruction are the way to go—personal attacks, caustic attacks,” he warned. However, “it would’ve been as derelict for us in 2012 not to make sure that people understood what the choices were.”

Politicians are people, too, as evident when Butts got distracted for a moment by a particular individual sitting near the front of the stage—”Sorry, the Prime Minister’s giving me mic-holding advice here.” Axelrod noted, “Good to have good staff.”

Butts’ wife, Jodi, and their 10- and 11-year-old children sat nearby, the children having spent much of the day handing out buttons. Jodi says she hadn’t talked to Butts much about the conversation with Axelrod because he had recently been away in Europe. She follows her husband on Twitter—”sometimes to know where he is,” she told Maclean’s, “but sometimes just to listen to what he has to say.”

The principal secretary had something to say about the principle of his job, and Axelrod echoed in synonymous words: they do their work because the people of their countries ought to be able to make the most of their lives.