Harjit Sajjan on why he accepts Trudeau's apology for wearing blackface

The defence minister says he's 'seen a lot of lip service,' and after their 'meaningful' talk, can tell that Trudeau is sorry about the blackface incidents 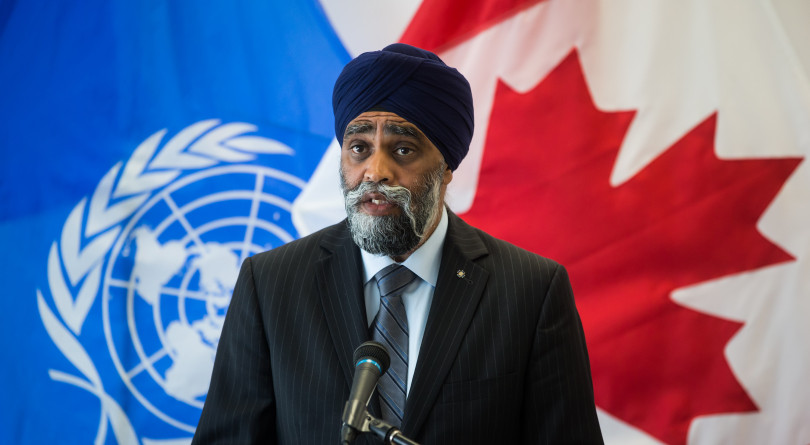 Sajjan speaks at a news conference in Vancouver about Canada's support for a UN peacekeeping mission in Uganda, on Aug. 15, 2019 (THE CANADIAN PRESS/Darryl Dyck)

As part of his response to media revelations that he wore blackface at least three times as a young man, for parties and performances, Prime Minister Justin Trudeau has been having one-on-one conversations with representatives of communities certain to be particularly troubled by the news.

Among the individuals Trudeau has called are several Liberal MPs and cabinet ministers who are black, Sikh or have Arab backgrounds. Maclean’s spoke with one of them—Defence Minister Harjit Sajjan, a turban-wearing Sikh, who is running in this fall’s election to try to hold his Vancouver South riding.

Q: When did you hear from Mr. Trudeau and what was that conversation like?

A: What’s more important here is the responsibility that he has taken for these actions. I’ve gotten to know him very well. The Justin that I know has been as advocate against any kind of racism, a strong advocate for minority rights. He has demonstrated who he is extensively, in a meaningful way, through the actions he has taken, the actions he has taken to promote inclusivity, the actions on a policy level, taking 25,000 Syrian refugees—I mean, the list goes on. And that’s something that I want Canadians to know.

Q: I’m curious, though, about how your own conversation with him went.

A: What I want to focus on is the excellent words that he has used. I know him well enough to know that his [public] apology was absolutely sincere. The conversation that I had with him was very meaningful, and I know that it was heartfelt from him as well.

Q: But Mr. Trudeau is such a polished performer. How can you be sure? Wouldn’t his words of regret have been more convincing if he had come out and talked about dressing up repeatedly in blackface before being forced by a news story to apologize?

A: I’ve lived with this my entire life. I’ve seen many leaders, many leaders, go through a time when certain comments weren’t acceptable. I’ve seen a lot of lip service throughout my time, and I can tell you straight out that Justin, in his apology, was heartfelt. I think I’m a good judge of character.

Q: So, do you think Canadians should take him at his word and move on?

A: It’s easy to say stuff. Words are important, but you’ve got to demonstrate with actions, and he’s already had a consistent performance on this.

Q: You say Canadians should judge him on how he has performed in office, not on something he did years ago. Yet Liberals often argue Conservatives can’t be trusted on abortion or same-sex marriage, often based on old comments, ignoring their long performance record during former prime minister Stephen Harper’s Conservative government, when they did not roll back rights in those areas. Isn’t that a double standard?

A: You need people to stand up. This isn’t just about saying certain words. If you’ve made homophobic comments, well, show some action on it. What are you doing? Take the leader of the opposition as an example. He literally compared homosexuals to dogs—hasn’t even apologized for that. What we’re looking for is, are you here to represent everybody? It’s one thing to say, I’m not going to march in your Pride parades, but at least apologize for a comment you made in the House of Commons.

Q: I spoke with Cheryl Thompson, a Ryerson University professor who has studied the history of blackface in Canada. She credited some aspects of Mr. Trudeau’s apology. But she also said people like you should confront him on this when he speaks to you about it. Did you confront him?

A: I had the conversation with him. We are able to have very strong and tough conversations, and that’s exactly what we do. Being in a position of influence, to have somebody who allows you to have that tough conversation, that’s one of the reasons I’m here. I’m not here to apologize for his actions. It was wrong then, it is wrong now.

Q: What should happen next?

A: I believe him when it comes to his apology, and I think Canadians will judge him on that. But let’s also take the opportunity to talk about something very important. We have hate crimes rising. People feel emboldened to make more racist comments. Kids are seeing more of this.

Q: Jagmeet Singh’s reaction to this story has been praised by many. Do you think the NDP leader hit the right notes in his response this week?

A: I’m not here to judge anybody when it comes to the politics side. But I’ve been very public in saying that it was a proud moment when he became leader of the NDP for diversity, for multiculturalism and for our community.

Q: What do you think parents should be telling their children, especially parents from visible minorities, knowing their kids are likely to see these troubling images of the young man who became prime minister?

A: Parents know their children best. Mine are 11 and 8. This is not about having a conversation now; this is a conversation that we have been having from Day 1. It’s about when something is wrong, you call it wrong. My kids have gotten to meet Justin on a number of occasions; he’s also met my dad. I know how genuine he actually is. But this also is a very appropriate moment for all of us to have a very frank conversation about where we’re at.

This interview was edited for clarity and length.