Introducing the Minister of Memes, Distractingly Good Hair and Spilling the Hot Tea

SATIRE: On this cabinet swearing-in day, we humbly suggest a set of additional personnel that could prove helpful in the days ahead 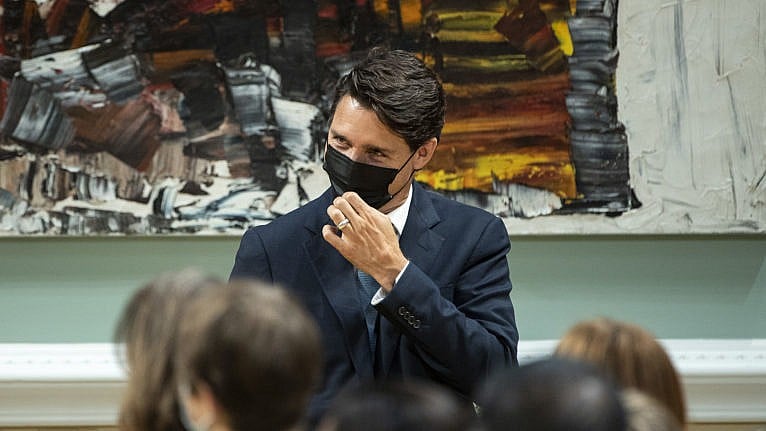 Trudeau adjusts his mask during a Cabinet swearing in ceremony at Rideau Hall in Ottawa, on Oct. 26, 2021 (Justin Tang/CP)

The announcement of a new federal cabinet means a new set of job titles, with ministers covering the full spectrum of policies and priorities on the government’s plate.

Looking back on Prime Minister Justin Trudeau’s first couple of mandates, we humbly suggest a set of additional personnel that could prove helpful in the days ahead.

Here are our hypothetical additions.

Minister of Damage Control and Monitoring the Prime Minister’s Travel Itinerary for Optics Issues: This portfolio is busy with files such as double-checking the PM’s invitations inbox; actually reading the Conflict of Interest Act; and figuring out who owns the vacation rental or island in question.

Minister of the Middle Class and Those Working Hard to Join It: An updated version of the “Minister of Middle Class Prosperity” role that would focus even less on defining the middle class and even more on congratulating hard-working Canadians for working hard.

Minister of Preventing Democratic Reform and Associate Minister of Vote Efficiency: Responsibilities include delivering warnings about splinter parties while figuring out the minimum margins for victory in key ridings.

Minister of Solemnly Accepting Responsibility on Behalf of Those Actually Responsible and Chief Curator of Apologies that Sound Sincere: Relied upon for committee testimony, historical apologies, personal apologies as well as non-apologies designed to cast doubt upon who remembered what events how.

Minister of Jurisdictional Loopholes, Quebec Expectations Management and Equalization Relations: A cross-partisan consultative role focused on pleasing both Quebecers and the rest of Canada (but mostly Quebecers) with the vaguest possible language around constitutional issues.

Minister of Exceeding Expectations, Surpassing Benchmarks, Moving Goalposts and Making Sure That Nobody Remembers the Defunct Mandate Letter Tracker: An opportunity to move well beyond “Deliverology” into multiple other “ologies” intended to streamline the government’s productivity and enhance its use of jargon.

Minister of Reminding the Rest of the Cabinet About the Existence of Alberta and Other Provinces West of Ontario: The minister would come equipped with maps and pronunciation guides for hard-to-remember places such as “Saskatchewan” and “Manitoba.”

Minister of Whataboutism and Wedge Issues Management: A public-facing position focused on vaccination status and the memorialization of the Harper government.

Minister of Cheerleading, Rallying the Troops, and Keeping Hope Alive After Successive Disappointing Elections: It’s a heck of a job.