Is it time to take party names off the ballot?

The Tories' Jo-Anne Gignac proves the power of local candidates. Which makes us ask: Shouldn't someone earn votes based on who he or she is? 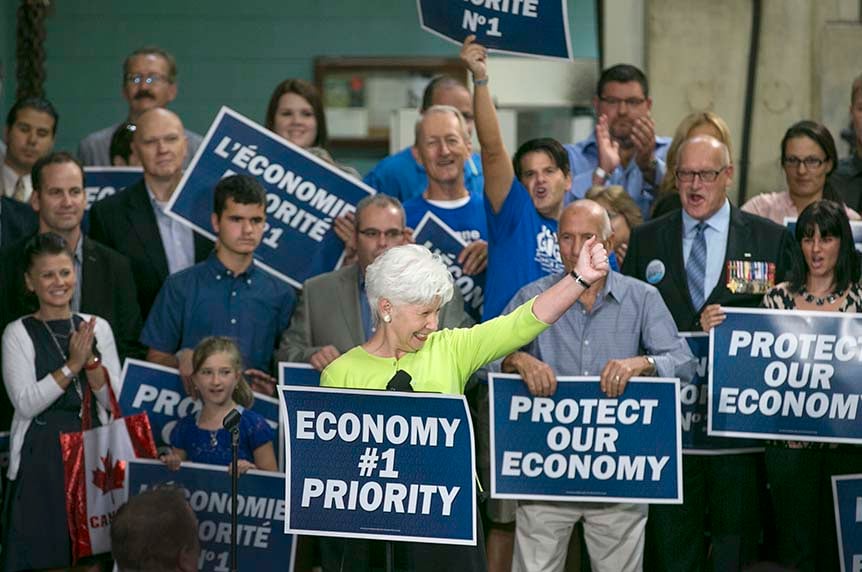 Jo-Anne Gignac appeared alongside Stephen Harper during a Conservative campaign event in Windsor, Ont., this weekend, which might have spoiled the surprise for some voters, unfortunately.

Gignac is the Conservative candidate in Windsor–Tecumseh, so her appearance at a Conservative event is fairly unremarkable. Her website and lawn signs also make her party affiliation clear.

But she has also been running radio ads that don’t mention which party she represents.

“I’m not trying to reach above party politics. I’m very proud of the Conservative government and our commitment to keeping taxes low and supporting families,” she told the CBC. “I think it’s just more or less to remind people of my record.”

In the clips of her interview with the CBC, she also makes mention of countering “some of what I’ve experienced [with] some people emphasizing parties rather than the individual [who’s] running in the riding.”

Gignac has the benefit of a public profile she can run on: She has been a city councillor for the last 12 years and was a member of the school board for 12 years before that. Whereas many candidates running federally for the first time can’t hope for any kind of boost from name recognition, Gignac could win votes based on her familiarity, so it would make sense for her to highlight herself and her record.

According to new research conducted by Peter Loewen, Daniel Rubenson and Royce Koop (of the University of Toronto, Ryerson University and the University of Manitoba), a local candidate could boost results by about two-thirds of a percentage point for Conservative candidates, 2.8 points for Liberal candidates, and a little over three points for New Democrats. Using the old map, 39 ridings in 2011 were decided by 3.5 points or fewer. Loewen transposes the 2011 results to the new riding map and finds that 37 ridings would have been within a margin of 3.2 points.

Previous research, based on the 2000 election, estimated that “the local candidate was a decisive consideration for five per cent of Canadian voters.” Fifty-one ridings were won in 2011 by a margin of five points or fewer.

As Loewen writes, a three-point boost is not nothing. But I might suggest that the candidate should still be something more. Former Conservative MP James Rajotte has suggested that we need to get to a point at which an MP can disagree with his or her party as much as 10 per cent of the time and not be considered incorrigible, and that seems like a decent impact to aim for: candidates who are relevant enough to matter for as much as 10 per cent of the vote. Indeed, those two ideas would seem to fit together.

Political parties are important to the system and are beneficial to our politics, and we shouldn’t aspire to a House of Commons of 338 Independents. (Even if such a thing were possible, associations would naturally develop.) But it’s still true that when party and party leader take overwhelming precedence, the system starts to lose the qualities of representation and accountability that are supposed to be its basis.

Related: Are Independents about to have their day in Parliament?

The Reform Act was, at its root, about reinforcing the significance and authority of candidates and MPs, and part of that involved eliminating the requirement that any candidate be endorsed by the party leader. That requirement was added to the Elections Act in 1970. At that same time, a change was made to the ballot that voters see in each election: For the first time, party allegiance appeared beside each candidate’s name.

Forty-five years later, we should take party names off the ballot.

Before 1970, candidates were listed by name and occupation. “There was no provision for identifying their political affiliation and, therefore, a voter had to know before entering the voting booth which candidate represented a particular party,” the Library of Parliament explained in a 2008 briefing. “There was great scope for voter confusion—both inadvertent and sometimes consciously planned by candidates; for instance, candidates with similar names sometimes ran in the same riding.”

The possibility for chicanery should not be entirely discounted. If, for instance, the Liberals in Windsor–Tecumseh wanted to misdirect Conservative votes, they might find someone named Joe Gignac and convince him to run as an Independent. But I’m not sure how great a threat the potential for under-handedness would present now: The Internet and social media would amplify obvious examples, and a risk-reward calculation might discourage parties from trying a stunt.

Candidates would still, of course, be able to campaign as party candidates, but at the final moment of decision, they would be elected or defeated on their own names. The slightest onus would be put on voters to know, even if for just the five minutes it takes to mark a ballot, who it is they are voting for. And, even if mostly symbolic, candidates would have to stand on their own as individuals.