Singh has often been drowned out as NDP leader. Here’s how he plans to finally make his mark. 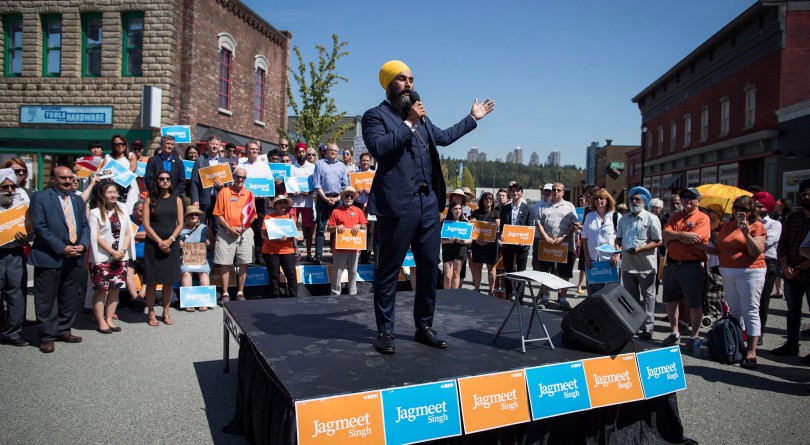 Trying to get your message across as the third party in Canadian federal politics is notoriously frustrating. Consider the day in late October when NDP Leader Jagmeet Singh stepped up to the microphone in the House of Commons foyer to urge the governing Liberals to sue drug companies for “meaningful restitution for the public costs” of the opioid epidemic. MP Don Davies, who was at Singh’s side as the NDP health critic, says he counted 28 questions from reporters at that media event—on issues ranging from caucus discipline to relations with Saudi Arabia—but not a single query on the actual idea Singh was pitching.

And that was pretty much how 2018 went for Singh. What he wanted to say was often drowned out or flatly ignored. Worse still, last spring he spent days on end explaining his position, as a Canadian Sikh, on Sikh politics in India. And then more days grappling with first suspending and then expelling Erin Weir from the NDP caucus over allegations the Saskatchewan MP made women feel uncomfortable. No wonder a poll by the Angus Reid Institute this fall found a mere 34 per cent of potential NDP voters felt confident Singh would boost the party’s seat count in next fall’s federal election.

That was far below the 61 per cent of probable Liberal voters who expect Justin Trudeau to lead Liberals to even better results in fall 2019 than their 2015 majority, and the 60 per cent of Conservative-leaning voters who think Andrew Scheer will boost the Tory contingent of MPs.

If Singh’s personal standing badly trails his rivals, though, his party continues to poll close to the 19.7 per cent popular-vote share it won in the 2015 election. “The idea that the NDP is in trouble is just not borne out by polls,” says Rick Smith, executive director of the left-leaning Broadbent Institute.

Still, Singh doesn’t deny that he has struggled. “There were some challenges that I faced this year, absolutely,” he said in an interview. “And they took away from the things that I wanted to focus on.” Beyond media attention to his positions on Indian politics and his handling of the Weir affair, Singh suffered from trying to lead his party from outside the House. He jumped from Ontario politics to win the leadership in 2017 and isn’t an MP. Although Singh announced he will run in the vacant Burnaby South riding, just east of Vancouver, Trudeau has delayed calling that by-election, but it is expected to take place in February.

That will leave Singh, who is from Toronto, spending a lot of time working to build his presence in B.C.—away from the fray in Ottawa. But he told Maclean’s he plans to put distinctive NDP policy positions in front of Canadian voters well before next fall’s campaign. In the past, federal parties have sometimes released their platforms far in advance of elections, sometimes just before or even during the campaign. While he wouldn’t be pinned down on precise timing, Singh said he’s firmly in the “release it in advance, in its entirety, camp.”

RELATED: What Jagmeet Singh can learn from Rachel Notley’s NDP

Some key elements of the platform Singh will run on are already falling into place. He emphasizes, for example, the party’s clear position that public insurance covering prescription drug costs should be built into universal health coverage. The Liberals will vie with him on this policy turf. Trudeau has assigned a former Ontario health minister, Eric Hoskins, to study pharmacare options. Singh is betting the Liberals will opt for, in his words, “a sort of patchwork plan,” allowing the NDP to pitch its version as more comprehensive.

His challenge on affordable housing—another core policy theme for Singh—is also to differentiate himself from a competing Liberal offer. Late last year, the Trudeau government announced a 10-year housing strategy, largely aimed at building and repairing affordable housing. But much of the money won’t flow immediately, including $4 billion to help lower-income families pay rent, which is slated to begin in 2020 and run until 2028. “The government hasn’t responded in a way that is proportional to how serious this is,” Singh says of the housing crunch. “They say it is a national crisis, but they make a plan to release funding after the election.”

Pollster Shachi Kurl, executive director of the Angus Reid Institute, says Singh faces a tough task if he hopes to persuade centre-left voters who gravitated to the Liberals in 2015 to switch to the NDP in 2019 on the basis of policy shadings that fall short of bold differentiation. “ ‘We’ll do pharmacare faster’ or ‘We’ll disperse housing money faster’ may be positions that are lost in the cacophony of things that leaders and voters are going to be talking about,” she says.

Yet Kurl is intrigued by signs that Singh is starting to stitch together a set of policies into a plausible NDP strategy for “seizing the urban narrative.” He’s stressing not only high housing costs, but also a broader sense of economic insecurity among younger Canadians. As well, Trudeau’s decision in early 2017 to break his 2015 campaign promise to usher in electoral reform might resonate among urban, left-leaning voters. “Where did Jagmeet Singh do well in terms of the leadership race? In the cities,” Kurl says. “So there is a play where the NDP goes hard in urban areas—Vancouver, Toronto—on housing issues, on democracy issues.”

READ MORE: Doug Ford, Jagmeet Singh and the myth of the ‘ethnic vote’

Singh will have to be creative to make issues like housing and electoral reform resonate during a campaign. Climate change is far more firmly on the agenda. Indeed, Scheer’s Conservatives seem determined to make their opposition to the Liberals’ carbon tax the ballot question. Again, on this issue, Singh finds himself proposing a sort of Liberals-plus policy. While he supports Trudeau’s carbon tax, he opposes the government’s policy of subsidizing big industrial greenhouse-gas emitters who would otherwise pay heavily. “On carbon pricing, we’ve talked about the importance of making sure the biggest polluters pay, not putting all the burden on everyday families,” he says.

Elbowing his way into the brewing battle between Trudeau and Scheer on climate change will be among Singh’s toughest tasks next year. But the Trudeau-Scheer clash might actually be less telling than the Trudeau-Trump contrast. In 2018, Trudeau’s best week in the public eye arguably came when Trump slammed him in a Twitter tirade after the close of the G7 summit in Charlevoix, Que., in late June. “That’s a reality,” Singh admits when asked about the obvious boost Trudeau gets when he’s judged against the U.S. president. “But it shows a poverty of imagination that a leader’s goal would be to be an anti-Trump.”

B.C. MP Davies says the climate of anxiety generated largely by Trump’s ubiquitous, disturbing international media presence offers at least a hypothetical opening for Singh. “On the ground, I think there is insecurity, cynicism and fear,” he says. “It can fuel anger and scapegoating, which is what populism on the right is trying to do. And I believe there’s a gap in the political spectrum that the NDP can fill, and it’s to respond to that insecurity, cynicism and fear with a message of unity and hope.”

RELATED: A stumbling Jagmeet Singh could be Justin Trudeau’s saviour

Beyond crafting that message—and somehow getting it heard—Singh needs a party machine to carry him into the campaign. But signs of what’s happening inside the NDP haven’t been reassuring. Party fundraising has been lacklustre, and Singh’s chief of staff, Willy Blomme, quit unexpectedly in early October. “It’s fair to say that I’ve had some structural challenges,” he says. But Singh is showing signs of filling organizational gaps, hiring Jennifer Howard, an experienced Manitoba New Democrat, as his new chief of staff and bringing in a respected operative, Michael Roy, in a bid to improve the party’s finances.

He’ll need the help. Singh failed to click for much of 2018. He still needs to prove he can win that vital seat in the House. He’s trying to draw attention to policies in a way that asks voters to parse the differences between NDP and Liberal positions. His image of youthful energy pits him directly against the strong suits of the Prime Minister who, though hardly unscathed by being in power, retains ample appeal to progressives in the age of Trump. The leaders of the three major federal parties each face serious obstacles in the coming election year, but Singh’s path to success is shaping up as the hardest of all.