Politics Insider for January 7: Trudeau once again leaves Singh dangling, what won't be talked about in Beijing and the case of the duelling pro-pipeline convoys 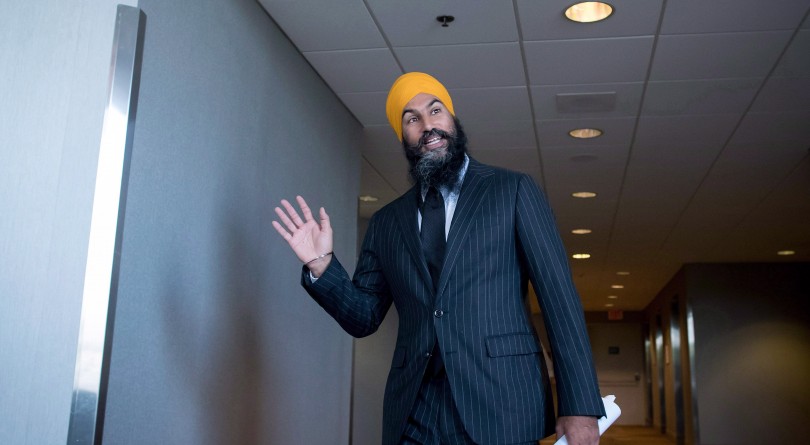 NDP Leader Jagmeet Singh waves to reporters as he arrives for the second day of a three-day NDP caucus national strategy session in Surrey, B.C., on Wednesday September 12, 2018. THE CANADIAN PRESS/Darryl Dyck

2019 is off to a hectic start. Canada’s frayed relations with China show few signs of improving, though there is movement on several levels.

A delegation of Canadian parliamentarians is in China for a trade mission that was planned before police in Vancouver arrested the CFO of Huawei on a U.S. warrant last month, and China retaliated by detaining two Canadians. But while the group of senators and MPs have indicated they have no intention of bringing up their cases, the employer of one of the two men, Michael Kovrig, is urging lawmakers to reconsider. Says Robert Malley, president and chief executive officer of the International Crisis Group: “I think it’s important that lawmakers at the highest level raise this case whenever they can with the Chinese authorities.” (Globe and Mail)

Ottawa has confirmed that at least 13 Canadians have been detained since Huawei’s Meng Wanzhou’s arrest, though most have been freed. Exactly what the remaining two, Kovrig and Michael Spavor are accused of, however, remains murky, despite the assertion by Chinese prosecutors that “there is no doubt” about their guilt.

“The Kovrig-Spavor detentions are pretty much the textbook definition of arbitrary. It is still not clear what they are being charged with. There is no specific evidence or description of any evidence of whatever they allegedly did,” Julian Ku, a professor at Hofstra University School of Law who studies China’s legal system, told CBC News. “Those of us observing from the outside should not give the Chinese government’s statements on this issue any credibility whatsoever; indeed, doing so would undermine our own notions of how fairness and rule of law should work.” (CBC News)

The idea that Canada should have avoided this mess in the first place by willfully ignoring the U.S. arrest warrant—as several former top Canadian officials have ingloriously suggested—says a lot about how Ottawa used to operate, writes Paul Wells.

What’s especially striking about [former trade negotiator Gordon] Ritchie’s advice—just snitch, it simplifies everything—is that I’m hearing it a lot around town lately. [John] Manley, Jean Chrétien’s former foreign minister, offered the same advice, as Ritchie points out. So, in informal conversations, have two very senior former staffers in Chrétien’s government. Both took Ritchie’s tone, which isn’t “Hear me out, I know this is a bit unorthodox,” but rather “What kind of a fool would honour an extradition treaty with our closest ally?”

I’m left wondering what sort of town Ottawa used to be, if so many of its old hands are sure that carrying out Canada’s treaty obligations constitutes “breathtaking ineptitude.” I’m tempted to say it was a town that was basically run by people friendly to Power Corporation for the purposes of safeguarding its business investments in China. And that leads me to offer a hypothesis to explain the foreign-policy differences between the Harper and Trudeau governments—yes, the two of them together—and their predecessors. (Maclean’s)

It’s said the enemy of your enemy is your friend, but there are now two Western-alienation-fuelled convoys planning to descend on Ottawa to send a message to Prime Minister Justin Trudeau, and organizers of the original pro-pipeline convoy aren’t happy. (Calgary Herald)

NDP leader Jagmeet Singh gathered his supporters on Sunday to mark the start of his byelection campaign in Burnaby South. Only one thing was missing: the byelection. Trudeau once again declined to set a date for the vote, leaving Singh fuming: “This is a decision that impacts the bedrock of our democracy … I want to send a message today, one clear message to Mr. Trudeau: Stop the delays. Call this byelection here in Burnaby South and the other byelections across this country now.” (StarMetro Vancouver)

When that byelection eventually does happen, Singh will face off against Liberal nominee Karen Wang, a daycare operator from Burnaby. Wang doesn’t have Singh’s  name recognition, but don’t count her out, say observers. (Maclean’s)

South of the border the President is facing a new reality. The Democratic women of the 116th Congress are already a force to be reckoned with, writes Allen Abel. But are they a force to banish Trump? (Maclean’s)