Shannon Proudfoot: In his convention speech, the NDP leader sought to draw a line between Liberals who say nice things, and an NDP that fights for the hardest-hit Canadians 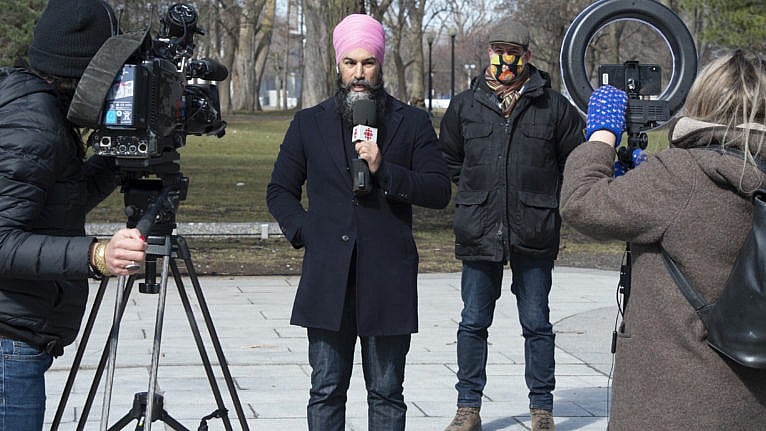 Near the close of the NDP’s virtual policy convention on Sunday, Jagmeet Singh used his leader’s address to attempt to make a clear and simple case to Canadians: the NDP is the only party that had the backs of ordinary people, and this last very difficult year has proven it.

“What we saw throughout this pandemic was that Justin Trudeau wanted to give the least support possible,” he said, standing before a square tiled backdrop of photos interspersed with “Fighting for you” campaign-style slogans. “But New Democrats fought for the maximum support for people every step of the way.”

Singh has said recently in interviews that he’s not worried about Canadians being able to list off the specific policy victories his 24-member caucus has won on their behalf, because he believes voters get the underlying point that New Democrats are fighting for them. But in his speech, he made sure to elucidate who had been hardest-hit by the pandemic and its economic fallout, and which support measures the NDP had battled for to help those people.

The Liberals had proposed a paltry 10-per cent wage subsidy last spring, but the NDP fought to make it 75 per cent, Singh said, while his party had also leaned on the government to double payments of the Canada Emergency Response Benefit to $2,000 a month. And while the Liberals funnelled money to their friends at WE Charity, Singh sneered, the NDP had ensured students had the support they needed and workers had the paid sick leave they needed. “We did that,” he declared.

“You know what we’ve seen in this pandemic is that the Liberals like to take credit, but New Democrats like to get results,” he said. “We fight to get results, and we need to continue that fight.”

Attacks on his opponents aside, the overarching theme of Singh’s speech was that the wealthy and powerful have sailed through this last difficult year and even profited from it while ordinary people have suffered, and that the two traditional governing parties talk about protecting those people but act to do anything but. Singh argues, essentially, that the Canadian political and economic system means it’s no accident things have ended up this way, it’s just that the pandemic has thrown it all into cruel relief.

Even as he sounded the alarm about the urgency of the third wave of the pandemic washing currently over the country, Singh offered a hopeful glimpse of a future that won’t be mired in business closures, anxious case-counting and desperation for vaccines.

It shouldn’t be you and your family, workers or small businesses, he argued; rather, the rich who profited while everyone else suffered should foot the bill, on the way to rebuilding something fairer, greener and more certain for everyone. “We can do all of this, but only if we have a government with the courage to do it,” he said. “The courage to stand up to powerful corporations and the ultra-rich. To make them pay their fair share. New Democrats have that courage.”

Over and over in different contexts, he portrayed the Liberals as pretty-talking hypocrites who say the right things about progressive policy and substantive change, but then revert to protecting elite interests.

The governing party was his primary target, but he spared a few archly derisive comments for the Conservatives, too. The Tories believe one of their paths to victory in what seems likely to be an election year runs through working-class voters, which has led to a steady stream of remarks from Leader Erin O’Toole about globalization leaving hard-working people behind and the importance of strong unions. In his speech, Singh appeared overtly amused by the Conservative attempt to eat the NDP’s traditional blue-collar lunch.

Singh and his party are currently in a frustrating position that the NDP has been in many times before: ostensibly influential because they hold the balance of power in a minority parliament, but at risk of having the governing Liberals gobble up the credit for each progressive measure they push for. Singh may say he’s not worried about Canadians being prepared to pass a pop quiz on what his party has achieved for them after this year of stress, fear and loss, but his convention speech did a tidy job of laying it all out.

“Canadians are better off with more New Democrats elected,” he summed up on Sunday.

Federal party poll standings have proven stubbornly immobile since last fall as Canadians remain transfixed on the ongoing crisis of the pandemic, contributing to a feeling that everything is suspended in limbo. Singh’s message seems particularly well-suited to a moment of rebuilding on foundations that have been rattled to their core, so it will be interesting to see if he and his party can get any traction once people can think about after instead of only worrying about now.