Philippe J. Fournier: An exclusive 338Canada/Mainstreet poll has the Liberals with the lead in Markham-Stouffville and the Independent in third place 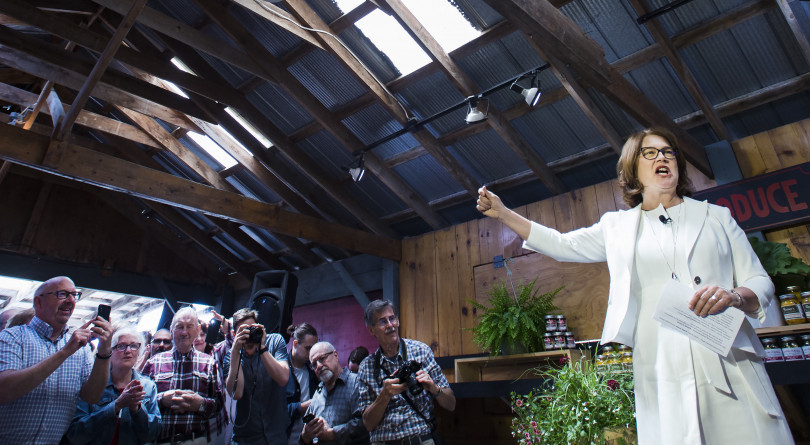 Philpott announces she'll run in the next federal election as an Independent in Markham, Ont., on May 27, 2019 (THE CANADIAN PRESS/Nathan Denette)

On Monday, we presented a poll showing that Jody Wilson-Raybould was currently competitive as an Independent candidate in the district of Vancouver Granville. Today, we take a look at fellow Independent Jane Philpott’s district of Markham-Stouffville, a suburb of Toronto located in the crucial GTA region of Ontario.

In 2015, Philpott won the newly created district of Markham-Stouffville by six points over her Conservative opponent in a clear two-way race between the Liberals and Conservatives (the Greens and NDP won a combined eight per cent of the popular vote). It would therefore be natural to put forth the hypothesis that, with Philpott running as an Independent next fall, a split Liberal-Philpott vote could potentially open up the opportunity for a rather easy Conservative win.

But a new exclusive poll conducted by Mainstreet Research and commissioned by 338Canada.com shows the race in Markham-Stouffville could be much closer than first believed. It also shows Philpott facing long odds to win re-election, sitting well back of the front-running Liberals and second-place Conservatives.

The poll was conducted between May 29 and May 30 and collected voting intentions of 601 voters in Markham-Stouffville. This is a probabilistic sample with a margin of error of ±4 per cent, 19 times out of 20. The poll’s full report is available here.

To the question: “If the federal election were held today, which party would you vote for?” Respondents were given the following options:

Here are the results with undecideds: 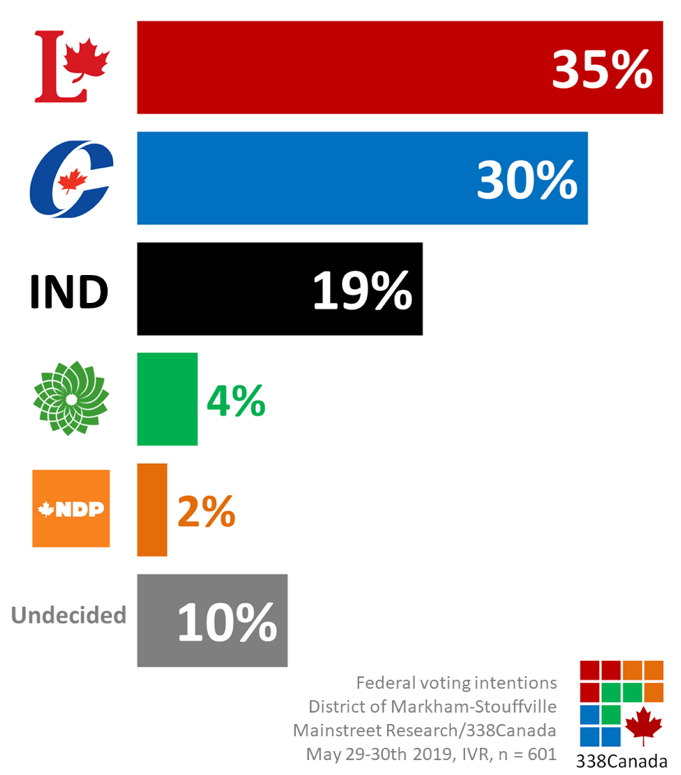 The Liberals lead the pack with the support of 35 per cent of respondents, five points ahead of the Conservatives. Considering the margin of error of this poll, this should be considered as a narrow lead for the Grits.

Independent candidate Jane Philpott stands in third place with 19 per cent, 16 points behind the Liberals.

The Greens and NDP received only four and two per cent support, respectively. As was expected, those two parties are not in contention in Markham-Stouffville.

Undecided respondents were then asked: “If you are undecided among those options, are you leaning towards any party or person?” Here are the results of leaning and decided voters: 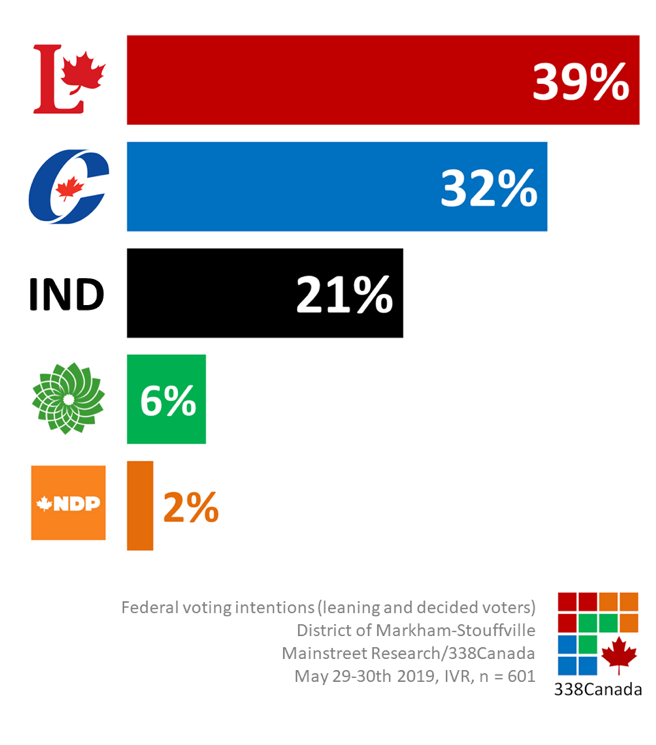 Among leaning and decided respondents, the Liberals increase their score to 39 per cent, seven points ahead of the Conservatives, which stand at 32 per cent. Although Philpott’s support climbs to 21 per cent, she still remains a distant third according to this poll.

In 2015, Philpott, then running as a Liberal, won 49.2 per cent of the vote in Markham-Stouffville, about 4,000 votes ahead of Conservative candidate Paul Calandra (who received 42.3 per cent). When we compare the 2015 results to the data from this poll, we see that perhaps our original hypothesis, that a split Liberal vote could lead to an easy Conservative win, may have been flawed: this data suggests that Philpott is drawing support from both the Liberals and Conservatives in nearly equal proportions.

However, unlike Jody Wilson-Raybould (who was measured in a statistical tie with the Liberals in Vancouver Granville), Jane Philpott faces long re-election odds according to these numbers. Not only does the Liberal brand still attract a fair share of Markham-Stouffville voters, but the area also has a strong Conservative base. While the district of Markham-Stouffville was contested for the first time with its current borders in 2015, by transposing the 2011 election results onto the new borders, the Conservatives would have won over 50 per cent of the popular vote in the district in that election.

As was the case with the Vancouver Granville poll, respondents were then asked their voting intentions among a list of potential candidates. The options were:

Theodore Anthony is the declared candidate for the Conservatives in Markham-Stouffville for next fall. Myles O’Brien was candidate for the Greens in 2015, and so was Gregory Hines for the NDP. Helena Jaczek was a high-profile Liberal MPP of Oak Ridges-Markham from 2007 to 2018. She was defeated in the new Markham-Stouffville district in the Ontario general election in June 2018. 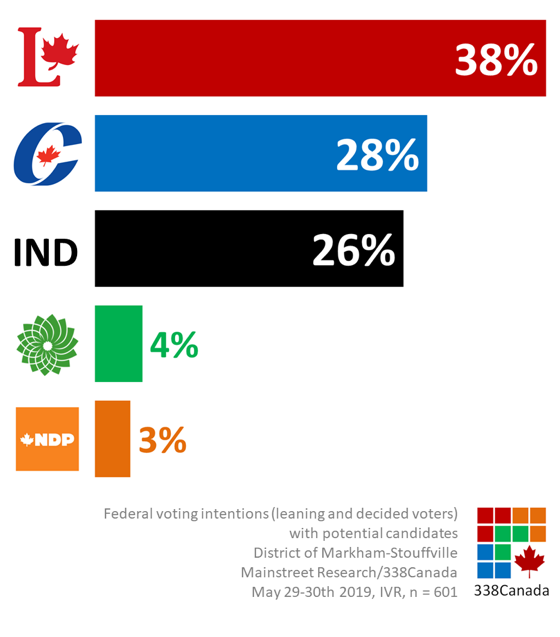 The road to re-election is thus obstacle-ridden for Philpott. According to the numbers presented above, both the Conservative and Liberal brands fare significantly better than Philpott’s among her district’s electorate. Obviously, this does not mean that she cannot win in October, but her team’s ground game will have to significantly outperform her main rivals.

Also, unlike Wilson-Raybould in Vancouver Granville who could potentially win her district with barely a third of the popular vote, Philpott will most likely not enjoy the benefit of a splintered vote—she probably will need close to or a little over 40 per cent of the vote to win.

For Philpott, or for any other independent candidate, this is a truly steep hill to climb.