Philpott on SNC-Lavalin affair: 'I have lost confidence in how the government has dealt with this matter and in how it has responded to the issues raised' 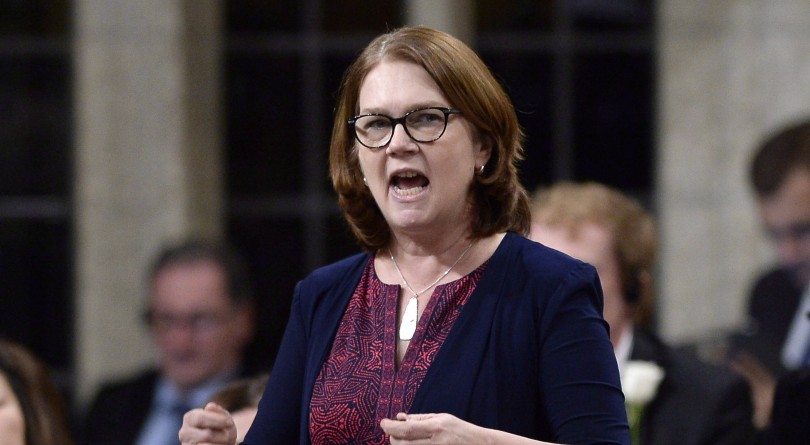 Minister of Indigenous Services Jane Philpott rises during Question Period in the House of Commons on Parliament Hill in Ottawa on Thursday, Dec. 6, 2018. (THE CANADIAN PRESS/Justin Tang)

Jane Philpott, the Treasury Board president who formerly served as Indigenous services minister and health minister in Justin Trudeau’s cabinet, resigned from cabinet today. In a letter to the Prime Minister, Philpott cited the SNC-Lavalin scandal that she says has “shaken the federal government in recent weeks,” and said it would be “untenable” for her to remain in cabinet. Here’s the full text of her letter.

It is an enormous privilege to be the Member of Parliament for Markham-Stouffville and to have served as Minister of Health, then Minister of Indigenous Services, then President of the Treasury Board and Minister of Digital Government. It has been an honour to play a leading role in progress that has shaped our country: bringing Syrian refugees to Canada; legislating a balanced approach to Medical Assistance in Dying; negotiating a health accord with new resources for mental health and home care; improving infrastructure for First Nations to provide clean water on reserve; and reforming child welfare to reduce the over-apprehension of Indigenous children.

However, I have been considering the events that have shaken the federal government in recent weeks and after serious reflection, I have concluded that I must resign as a member of Cabinet.

In Canada, the constitutional convention of Cabinet solidarity means, among other things, that ministers are expected to defend all Cabinet decisions. A minister must always be prepared to defend other ministers publicly, and must speak in support of the government and its policies. Given this convention and the current circumstances, it is untenable for me to continue to serve as a Cabinet minister.

Unfortunately, the evidence of efforts by politicians and/or officials to pressure the former Attorney General to intervene in the criminal case involving SNC-Lavalin, and the evidence as to the content of those efforts have raised serious concerns for me. Those concerns have been augmented by the views expressed by my constituents and other Canadians.

The solemn principles at stake are the independence and integrity of our justice system. It is a fundamental doctrine of the rule of law that our Attorney General should not be subjected to political pressure or interference regarding the exercise of her prosecutorial discretion in criminal cases. Sadly, I have lost confidence in how the government has dealt with this matter and in how it has responded to the issues raised.

It grieves me to leave a portfolio where I was at work to deliver on an important mandate. But I must abide by my core values, my ethical responsibilities and constitutional obligations. There can be a cost to acting on one’s principles, but there is a bigger cost to abandoning them.

Although I must regretfully resign from Cabinet, I will continue to serve Canadians in every other way that I can. I was elected as a Liberal Member of Parliament for Markham-Stouffville and I intend to continue in that role. I am firmly committed to our crucial platform priorities, especially: justice for Indigenous peoples; and implementing a plan to tackle the existential threat of climate change. Canadians need the assurance that, in all matters, Members of Parliament will act in the best interests of the public. My decision has been made with that spirit and intent.