Jane Philpott's vote of no confidence in Trudeau 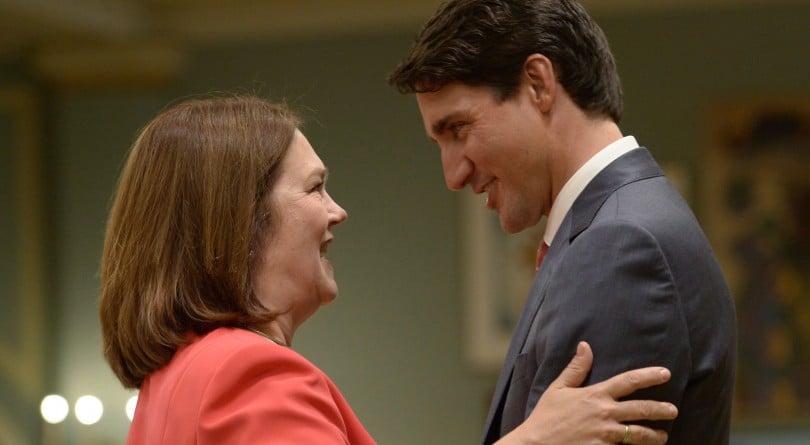 With Jane Philpott‘s shocking resignation from cabinet, Prime Minister Justin Trudeau now has a historic decision to make—carry out another cabinet shuffle to replace one of his top performers, or wait to see if anybody else decides to quit, too. It’s historic because Canadian politicians almost never resign on principle (as Maclean’s own Shannon Proudfoot documents here) and certainly not two of them within weeks.

Will there be more? Every Liberal cabinet minister and MP now has his or her own decision to make, writes Paul Wells: “We are about to find out who is serious, and who merely plays serious on Instagram.” (Maclean’s)

In her resignation letter, Philpott left no question about why she was walking away:

The solemn principles at stake are the independence and integrity of our justice system. It is a fundamental doctrine of the rule of law that our Attorney General should not be subjected to political pressure or interference regarding the exercise of her prosecutorial discretion in criminal cases. Sadly, I have lost confidence in how the government has dealt with this matter and in how it has responded to the issues raised.

The SNC-Lavalin affair is just the latest in a long line of instances where Trudeau has acted one way and talked another, writes Wells:

If Trudeau is now saying his only priority was to save jobs, it’s because he got caught. If he refuses to say out loud what a majestic procession of Liberal minions kept telling Wilson-Raybould behind closed doors—that he was especially interested in saving Liberal jobs in back-to-back election years—it’s because that’s the kind of guy he is. He low-bridged a major change to criminal prosecutions while a large company was facing charges, depicting as a crackdown what was actually an escape hatch, because he didn’t dare simply say what he wanted. Didn’t think it would pass the smell test of the Canadian people. Didn’t think what he was doing was defensible.

And he was right. (Maclean’s)

One of the issues Wells’ highlights in his critique of Trudeau’s “phoniness” was the Prime Minister’s declaration last fall that he was looking for a way out of an arms deal with Saudi Arabia after the regime murdered journalist Jamal Khashoggi. As if on cue: “Regarding the Canada arms deal, we see the Canadian government going ahead with the deal, so the statements are for domestic consumption,” said Saudi Arabia’s foreign minister at a news conference on Monday. (Reuters)

When Trudeau’s former chief of staff Gerald Butts testifies to the justice committee on Wednesday morning, he’ll no doubt work to shift the goalposts on the SNC-Lavalin controversy, writes Andrew MacDougall. It’s part of a now all-too-familiar pattern for Team Trudeau: “The Liberals are now frantically trying to normalize what their 2015 selves would never have tolerated. We’re not in sunny ways any more, Toto.” (Maclean’s)

And finally over to Ontario politics…

Justin Trudeau: By constantly haranguing the justice minister, I left the distinct impression I was trying to interfere with the rule of law.

The Ford government has fired Brad Blair, the Ontario Provincial Police deputy commissioner who blew the whistle on Ford’s “off-the-books” travel van and who has criticized Ford for hiring a friend with insufficient qualifications to run the OPP. “Ford is acting like the president of a banana republic, or the commissioner of Hazzard County, and his cabinet ministers are apparently all fine with that,” writes Stephen Maher. “This is much more worrying than l’affair SNC-Lavalin, because the police must be independent of government, and this government seems not to have any understanding that.” (Maclean’s)