Jerry Dias wants to make an enemy out of Andrew Scheer

The head of Canada's largest private-sector union says he's not blindly loyal to any party, but he'll spend as much money as possible to beat Andrew Scheer 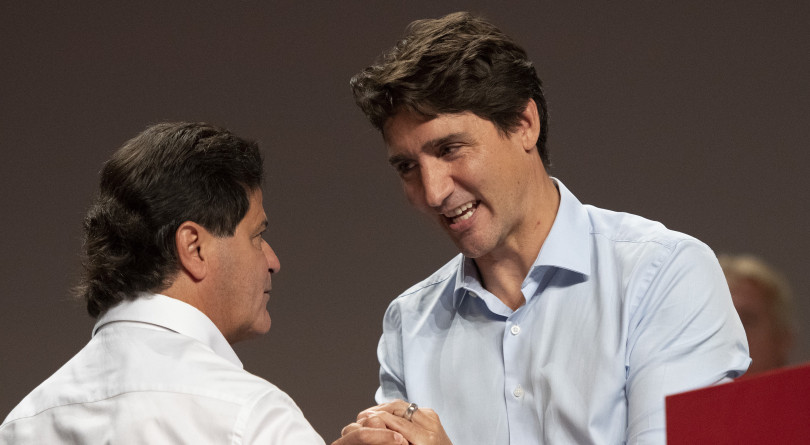 Jerry Dias, the president of Canada’s largest private-sector union, spent the first two years of his mandate at Unifor fighting a federal government he openly accused of attacking unions. Dias has spent the last few years opposite a Liberal government that wasn’t only friendlier, but even invited him into its inner circle during NAFTA renegotiations. This week, both Prime Minister Justin Trudeau and Foreign Affairs Minister Chrystia Freeland addressed Unifor’s national convention in Quebec City. The relationship looked chummy. Trudeau remarked that the labour movement “deserves to be treated with fairness, not a government that sees it as an enemy”—a sharp rebuke of his Tory rivals’ approach to labour relations. Just before he took the stage to chair the conventions proceedings, Dias spoke to Maclean’s over the phone about the upcoming election, what he thinks of the NDP and where he thinks the election will be won and lost.

This interview has been condensed and edited for clarity. Disclosure: Unifor represents some journalists at Maclean’s, including Nick Taylor-Vaisey.

Q: Justin Trudeau and Chrystia Freeland spoke at your national convention this week. Was offering them that space a tacit endorsement of their vision for Canada?

A: The bottom line is as a union, we don’t have blind loyalty to any party. A lot of the labour movement has very blind loyalty to the NDP. Frankly, the NDP doesn’t call me and ask my permission before they make any public statement, and that’s fair, because ultimately they’re going to make their own decisions.

I respect the government insofar as it took a lot of guts, and it’s the first and only government that I know globally, that invited the labour movement to play an incredibly active role during the renegotiations of NAFTA. I spent a lot of time with Chrystia on that particular file. Do I agree with everything she’s saying? The answer is no. Do I agree with the position they’re taking on Venezuela? There’s a lot of things on which we differ. Ultimately, on the NAFTA file, we moved the yardstick in a significant way for working-class people. Is it a perfect deal? No, not by any stretch of the imagination.

A: I lived, and we lived, 10 years of Harper. We’ve now lived over a year of Doug Ford. Our politics as a union are pretty straight-forward. It’s anybody but Conservative. We will support any politician in any riding who’s best positioned to defeat a Conservative. We will be full steam ahead supporting [NDP MP] Tracey Ramsey. We’ll be supporting the NDP incumbents, for sure.

A: We’ve got almost 320,000 members, and we will be knocking on almost 320,000 member doors. We were very active pre-writ. When it came to election spending on ads, we worked very closely with Engage Canada. We will be running major Unifor ads from now until the election. We’re going to put our money where our mouth is.

Q: How do you judge the Liberal record?

A: There’s been some incredibly progressive stuff, but there’s been some problematic stuff. I disagree with them ordering postal workers back to work. I don’t think a government should interfere in labour relations. I think if workers have the right to strike, they have the right to strike. There’s a variety of things I think they should have gone farther on. But there’s been a lot of good things as well. The whole issue of tearing up Stephen Harper’s anti-union bills. We probably had the largest increases in CPP in decades for our seniors. They banned asbestos. But the reason we aren’t beholden to any political party is there’s no party, in my opinion, that would do exactly what us as a labour movement would want done.

I take a look at the NDP that was in power in Manitoba for 15 years. We still have card check [a process for certifying a union without a vote] for the purpose of organizing workers at 65 per cent—not 50 per cent plus one. They didn’t pass anti-scab legislation.

Take a look at Rachel Notley, who I think is one of the best, most principled politicians this country has ever seen. What did we do? We introduced card check in Alberta at 65 per cent. Parties are going to have to win our respect.

Q: What do you like—and dislike—about the NDP’s platform?

I take a look at the last federal campaign, where Tom Mulcair ran on a platform of balanced budgets. That’s taken right out of the Conservative playbook. That’s why I don’t have any blind loyalty.

Q: You have members all over Canada and resources to spread around. Where do you think the election will be won and lost?

A: It’s going to be Ontario, Quebec and B.C. Ontario and Quebec are huge. Ontario will be the battleground. Toronto and the GTA are going to be huge. That’s why you’ve got Andrew Scheer saying to Doug Ford, please go into the basement and shut up, turn the lights off and hide in the corner and be quiet. Thank God Doug’s not smart enough to do that.

Q: Do you expect to spend the maximum allowed under the Canada Elections Act ($511,700 during the writ period)?

A: We will absolutely be spending the limit.

Q: Many journalists who are Unifor members, and observers outside the union, have expressed a concern with Unifor actively campaigning, on journalists’ behalf, against Andrew Scheer. How do you respond to that criticism?

A: We’ve got a government that has $600 million to help stabilize journalism. To me, strong journalism is tantamount to having strong democracy in any country. There’s been 250 news outlets either merged or closed in the last few years. I don’t know how you’re going to win an argument with me that somehow less voices, less journalistic integrity is somehow better for us as a nation. I’m just not there.

Q: Is it worth acknowledging the awkwardness of the perception that journalists are anti-Conservative?

A: I don’t buy any of that. I have so much respect for journalists in our country. There’s no way, based on where you send your dues, somehow that’s going to impact your mindset. The whole argument is such bulls—t.