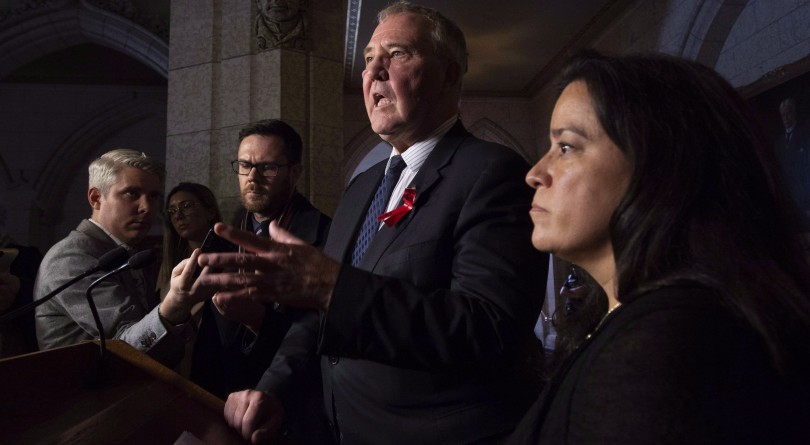 Wilson-Raybould looks on as Minister of Border Security and Organized Crime Reduction Bill Blair speaks at a news conference in Ottawa on Dec. 4, 2018. (THE CANADIAN PRESS/Adrian Wyld)

The cabinet minister at the centre of a potentially explosive political story has remained carefully reticent about allegations that the Prime Minister’s Office pressured her to intervene on behalf of a Quebec construction behemoth facing criminal prosecution, then demoted her when she would not play along. In response to a report in The Globe and Mail about machinations surrounding SNC-Lavalin, Jody Wilson-Raybould—until recently Justice Minister and Attorney General, now in charge of Veterans Affairs—has said only, “As the former minister of justice and attorney general of Canada, I am bound by solicitor-client privilege in this matter.”

However, her public speeches and statements in the months before that story broke on Thursday form an intriguing trail of political breadcrumbs that suggests a cabinet minister who was deeply frustrated.

The most striking statement from Wilson-Raybould, of course, arrived in then-covert form on Jan. 14, when she released an extraordinary 2,000-word exit interview statement immediately after she was demoted to veterans affairs in a cabinet shuffle. The document listed at length her accomplishments in the justice department, as though she was publicly litigating her own job performance.

But then there was this passage, which cast itself in a very different light following the Globe story:

“It is a pillar of our democracy that our system of justice be free from even the perception of political interference and uphold the highest levels of public confidence. As such, it has always been my view that the Attorney General of Canada must be non-partisan, more transparent in the principles that are the basis of decisions, and, in this respect, always willing to speak truth to power. This is how I served throughout my tenure in that role…”

Those remarks appear to be Wilson-Raybould’s most relevant hidden-in-plain-sight rebuttal to the PMO pressure that was alleged this week. But beyond events related to SNC-Lavalin, there have been reports that the MP representing Vancouver-Granville was dissatisfied with her government’s progress on Indigenous issues and had attracted the ire of the PMO for airing those sentiments.

Sprinkled throughout her speeches over the last few months are passages that reveal her frustration about the slow pace of real change beneath the sunny rhetorical facade, as well as her resentment at feeling sidelined around the cabinet table.

On Sept. 13, she gave a speech in Saskatoon on the topic of Indigenous people’s disproportionate interaction with the criminal justice system, in which she said the following:

“But words are also easy/cheap. And too often we see the tendency—especially in politics—to use important words that have real meaning and importance carelessly.  We see them being applied to ideas and actions that in truth do not reflect their actual meaning—even, sometimes, their opposite.

…When we see this being done it does not advance reconciliation. It actually undermines it.  It causes confusion, chaos and division. It treats a challenge—a challenge that is vital for the survival and well-being of children, women, families and communities across this country—as a ‘game of rhetoric’. It trivializes—often out of ignorance or political expediency—a moral, social and economic imperative for our country.

…So, while I have been thrilled in recent years to see how Canadians—and governments—have begun to talk the talk of reconciliation. I remain constantly, incessantly, vigilant in demanding that we honour the meaning of these important words, and that words translate into real, transformative action.

…For my part and to be very candid, I have been challenged, but I also challenge constantly.  And I will continue to do that every day I have the privilege to be the Minister of Justice and Attorney-General of Canada.”

Two weeks later, on Sept. 27, the then-justice minister delivered a speech in Comox, B.C., on the topic of modernizing Canada’s justice system and renewing relationships with Indigenous peoples. In that speech, she said the following:

“Part of what I want to reflect on tonight is how after three years as a Minister of the Crown I still have to contend—both personally and professionally—with a colonial legacy that remains pervasive despite best intentions and which is exacerbated by the trials and tribulations of partisan politics.

…Words, in the work of reconciliation, are also cheap without real action—action that goes to the core of undoing the colonial laws, policies and practices, and that is based on the real meaning of reconciliation. We all need to understand this.

…The path of justice and equality is not advanced or achieved through half-measures, good intentions, or lofty rhetoric. And it is certainly not achieved through obfuscation or confusion about what we mean when we speak. Hard choices, innovative actions, transformations in laws and policies, new understandings and attitudes, new patterns of behaviour—this is what is needed.”

On Oct. 30, Wilson-Raybould was the opening speaker at an event organized by the Public Policy Forum, entitled “Raising the Bar: Indigenous Women’s Impact on the Law-scape.” At that event in Ottawa, she shared the following:

“In my experience, it is typically the women in our communities who are leading the charge to decolonize and rebuild our governance models as our nations move away from colonial systems. It is the work I was doing before I moved into my current role. A role I take—of course—incredibly seriously, although at times it can be a challenge and incredibly frustrating.

…Indeed in my own experience serving as the first Indigenous person to be Canada’s Minister of Justice and Attorney-General, I have unfortunately had it reinforced that when addressing Indigenous issues, no matter what table one sits around, or in what position, or with what title and appearance of influence and power, the experience of marginalization can still carry with you. But this does not deter me. It only makes my resolve stronger and more determined.”

On Nov. 29 in Vancouver, she addressed a gathering of B.C. provincial cabinet members and First Nations chiefs, saying the following:

“…I think it is timely to share with you some reflections that are in my mind and heart about what we have seen transpire in recent months. To ‘take stock’, so to speak, about where we are at in this vital work, and where we may go next.

…Thinking that good intentions, tinkering around the edges of the Indian Act, or that making increased financial investments—however significant and unprecedented—will in themselves close the gaps is naive. Transformative change and new directions are required.

…Maybe think of it through the analogy of a tree. As we all know, if the roots of a tree are dead, the tree will not grow—even if we water it. And while the trunk may stand for years, at some point it falls over and begins rotting. For too long our main strategy has been to pour water on dead roots, hoping that the tree will grow. Of course, it does not.

…What we need to do together, Crown governments and Indigenous peoples—and this work is long overdue—is dig up the dead roots and plant something new and then properly water and fertilize it.

…But I think we all know this. Yet, regrettably, it still has not happened in any comprehensive way. We need to continue to ask ourselves, ‘Why?’ And to challenge ourselves to confront that which stands in the way. And wherever the obstacles are coming from—be it from within government or outside.

…Yet, even with friendly governments and with progressive Indigenous leadership—change is always challenging. As the late Chief Joe Mathias reminded us—during the constitutional talks on self-government in the 1980s—he said to ‘Behold the turtle… he moves forward when he sticks his neck out.’ The question remains today are we prepared to stick our necks out? I say, let us stick our necks out. I am.”