Jonathan Wilkinson and a stick of dynamite

Shannon Proudfoot: The new minister of environment and climate change has a very hard job—and an intriguing background well suited to it 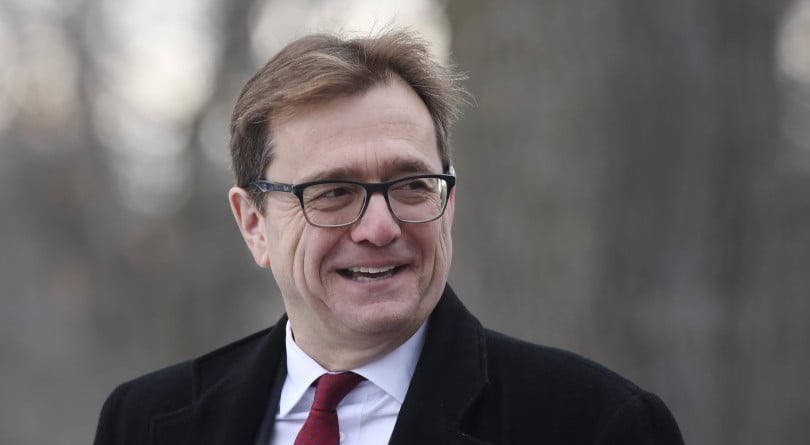 Wilkinson arrives for the cabinet swearing-in ceremony in Ottawa on Nov. 20, 2019 (THE CANADIAN PRESS/Adrian Wyld)

When it came time for Jonathan Wilkinson to walk to the front of the delightfully garish Tent Room at Rideau Hall to be sworn in as the new minister of environment and climate change in Justin Trudeau’s retooled cabinet on Wednesday, he and his predecessor executed a quick, impromptu hand-off.

As Wilkinson—formerly minister of fisheries, oceans and the Canadian Coast Guard—passed the row where Catherine McKenna was sitting, he reached out and they squeezed each other’s hands, before he continued on to recite his ministerial oath. Given the importance of the file Wilkinson is taking over from McKenna, and the white-hot tensions flaring around it in Canada right now, the two cabinet ministers might as well have been handing off a lit stick of cartoon Acme dynamite as they passed the torch.

Later, Wilkinson stepped to the podium set up in the Rideau Hall driveway and addressed the waiting throngs of reporters, who asked several versions of the same question: How on earth are you going to do this?

We need to be sensitive to the “legitimate aspirations” of all areas of the country, he replied, adding, “That certainly includes Alberta and Saskatchewan.”

In last month’s election, the Liberals failed to land a single MP from either of those provinces, but Wilkinson ran through his Prairie bone-fides for the assembled media on Wednesday: grew up and attended university in Saskatchewan, was an advisor to former premier Roy Romanow, worked in intergovernmental affairs from the provincial side.

READ MORE: What Chrystia Freeland’s real role will be

Another reporter asked a more pointed question: your government has spent the last four years generating resentment and alienation in the west, and now you have to push much further with your climate change policies in order to meet your emissions reductions targets, so how are you going to do that given the already-tattered state of things?

Wilkinson disputed the “western” framing, pointing out that there are 11 Liberal MPs from British Columbia and four from Manitoba. “The issue is one that relates very much to the hydro-carbon producing regions of this country and how we address climate change in a way that addresses their legitimate economic concerns,” he said.

Wilkinson was McKenna’s parliamentary secretary in the previous iteration of the Trudeau cabinet, so he will be well acquainted with the portfolio and its explosive sore points. Over her four years on the file, McKenna was subjected to an escalating torrent of online abuse and real-world threats that had as much to do with the profound societal and economic change implied by her file as they did with the fact that she is a woman in public life.

Wilkinson, of course, will be the object of one of those sources of fury and not the other, but he has an intriguing professional background that seems well-suited to his government’s insistence that there is a path to tackling the existential threat of climate change without triggering an existential economic and cultural crisis for a large swath of the country that is primed for a fight.

He was born in Sault Ste. Marie, Ont., before moving to Canada’s bread basket for his growing-up years, and Wilkinson first caught Romanow’s attention when he was running the youth wing of the province’s NDP. But before he went to work for the premier, he won a Rhodes scholarship and spent two years at Oxford completing a master’s degree, then returned to do a second one in international relations at McGill University.

The Oxford tutorial system of pairing grad students one-on-one with professors shaped the way he processes things, he told the Globe and Mail in 2012. “It forces you to work and to really think and understand what you are doing,” he said. “The way that I am able to think through problems in a critical and analytic way is a product of the two years I spent at Oxford.”

Wilkinson was just finishing his McGill thesis when the 1991 provincial election rolled around, and Romanow asked him to work on the campaign, then kept him on to work on the Charlottetown accord afterward. “I spent a year of my life right out of graduate school negotiating senate reform,” Wilkinson told a local Vancouver community site, Lower Lonsdale, shortly after being elected to represent the riding of North Vancouver in 2015.

After four years working for Romanow, Wilkinson decamped to Toronto to work for the global consulting giant Bain & Co., which was co-founded by former U.S. Presidential candidate Mitt Romney. The sanguine way Wilkinson explained this left—or rather, right—turn in his career suggested a brain that regularly alighted on new things it wanted to wrap itself around. “I was interested in doing something else; in particular, learning about how the business community worked,” he told the Globe.

Following that sojourn, Wilkinson and his wife moved to Vancouver, where he spent the next 20 years as an executive in a variety of clean-tech businesses.

In 2011, he took over as CEO from the founder of BioteQ Environmental Technologies Inc, which treated wastewater to remove metal and other contaminants. “It is important to get up in the morning and make a buck for the shareholders, but it is also important for me to make a contribution in some way that is beyond simply financial results,” he told the Globe.

On Wednesday, he touted his clean-tech corporate background as a potential path to finding “common ground” with the resource-producing regions of Canada that feel most threatened by the rhetoric and policy around climate change at the moment.

Catherine Abreu, executive director of Climate Action Network Canada, expects the continuing implementation of the federal government’s Pan-Canadian Framework on Clean Growth and Climate Change to be near the top of the policy priority list, and she thinks he’s a good match for the job.

“Jonathan Wilkinson is set up really well to do that. He’s got the policy chops, he understands the files and I think he’ll be a good person to deliver on that implementation,” he says. “It’s good, too, that he has that clean-tech experience so he can kind of wed some of those economic considerations to the policy implementation.”

With Wilkinson taking over environment, McKenna becomes the minister of infrastructure and communities, and in her new portfolio, she will reportedly focus on green projects. Andrew Leach, an energy and environmental economist and professor at the University of Alberta, perceives that as the government taking care not to frame McKenna’s new gig as a demotion or a repudiation of the approach to the environment file under her watch.

Many people framed their opposition to certain bills—particularly C-69, which revamped the environmental assessment process for resource projects, including pipelines—in terms of the fact that the legislation gave the minister discretion on decisions. “There was probably very little that she was going to be able to do or say that was going to appease the people who’d already decided that she was against them fundamentally,” he says.

Wilkinson will inherently bring a fresh tone to the file, Leach points out, given his lack of high-profile history on it. “I think that’s unconditionally a good thing,” he says.

Then he pauses to note that the The United Nations Climate Change Conference takes place in Madrid in just two weeks: “The downside is, you’re sort of getting thrown into the fire.”