Just tuning in? The NDP is in the lead. Yes, that NDP. 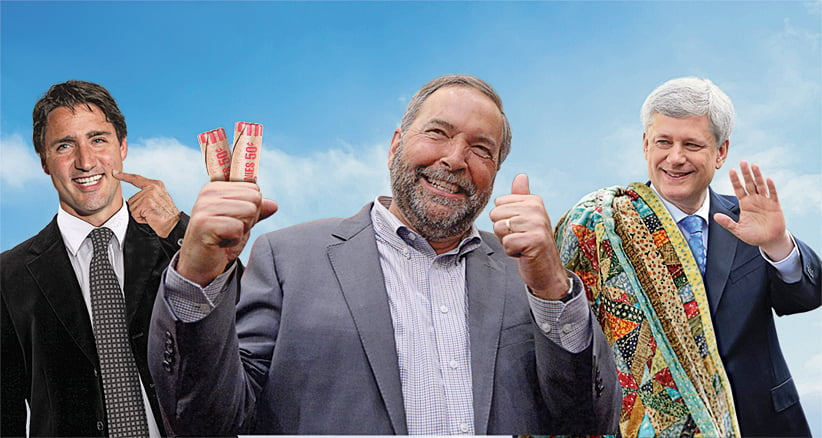 We’ve almost arrived at Labour Day—and, according to the media, now is the time we’re supposed to start paying attention to the election. The August leg of the campaign was apparently just a dry run, or a prank, or a weird episode in which Justin Trudeau came out of the shower to discover his belief in balanced budgets had all been a dream.

For those of you just tuning in, brace yourselves: The NDP is in the lead. Yes, that NDP. Even weirder, the New Democrats have been portraying themselves as the most fiscally responsible party on offer. The NDP! The party whose most passionate members have never met a social program they didn’t like or a razor they didn’t ignore!

Frankly, Thomas Mulcair may be overcompensating. New Democrats are traditionally viewed as being about as responsible with money as Donald Trump is with adjectives. To recast the party’s image, Mulcair keeps raising the bar. I’ll balance the budget in my first term. I’ll balance it in my first year. I’ll personally come to your home and roll your pennies!

Related reading: Attention leaders, it’s in your interest to step it up!

He doesn’t expect us to believe him, does he? Sure, some centrist newbies are on the bandwagon, but the core of the party still wants government to do most things for most people, and also for certain pets and all trees. If he wants us to buy in, Mulcair needs to up the ante. Promise in writing to shave the beard if you run even one deficit, Tom. Make the pledge, and I think I speak for many Canadians when I say: I’m listening.

To be fair, Mulcair has been categorical in his promise. Not everyone has been so candid. The Conservative leader was recently asked whether two consecutive quarters of economic decline—the technical definition of a recession—means that Canada is, in fact, experiencing a recession. His reply? “It’s more important to describe the realities of the situation, rather than have labels.”

Let’s take a moment to unpack that sentence, because it is just beautiful. Stephen Harper, the man who has spent more than a decade reminding us of his training in economics, now says a recession isn’t about silly ol’ numbers—it’s about how we feel. Thanks, Prime Minister Oprah! Too bad you weren’t around in the 1930s; you could have warded off the Depression with a stimulus package of group hugs.

Speaking of olden times, political leaders used to announce things in front of inanimate objects— a flag, for example, or a Herb Gray. Not anymore. It is required by current fashion that a politician be positioned in front of a group of supporters—the more diverse, the better. (At a Harper appearance in Quebec in June, this “diversity” was embodied by One Black Guy.) These supporters are instructed to do things like applaud, wave signs and sometimes even stay awake. How is this coordinated display supposed to win over undecided voters? The psychology is vague. Welp, I was on the fence, but this leader has the support of 28 people with nothing better to do on a Tuesday afternoon, so . . .

It can be riveting to watch these human props. I recommend joining a televised event about 20 minutes in. That’s when supporters really start to lose their enthusiasm, followed by their focus, followed by their will to live. Some begin to fidget. Others stifle yawns. One adolescent boy at a Harper event in Lancaster, Ont., zoned out so spectacularly that he failed to blink for what seemed like a week. By the end, he appeared to be suffering from post-rhetoric stress disorder.

It’s not just attention spans that are being tested. It’s the parties themselves. They all need to make policy announcements—but, in an 11-week campaign, each party will have blown the whole of the federal budget by the end of the month. The campaign’s final three weeks are going to consist of the leaders crisscrossing the country, announcing only things that cost no money. Ladies and gentlemen, I stand before you today and declare that, under a Liberal government, smiles will be free!

One solution is to be stingy with the revelations. Already we’ve seen leaders devote whole days to minor proposals, such as $2 million for emergency training (NDP), small reforms to labour laws (Liberals) and a tax credit for Canadians who participate in quilting circles (Conservatives).

Got you. Harper hasn’t actually proposed that one. He’s saving it for October. That’s when people will really be paying attention.