Election Image of the Day: After a flat first week, the Liberals depict their opponent as a menace to public medicine. No, this is not a rerun. 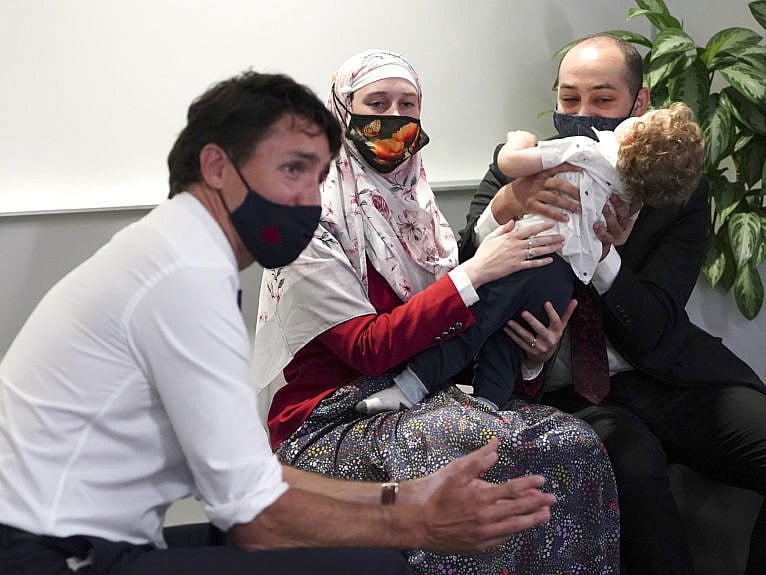 Liberal Leader Justin Trudeau meets with a family and physicians in Halifax to discuss difficulties finding a family doctor. The Liberals have tried to suggest Tory Leader Erin O'Toole would undermine public health care if his party is elected. (Sean Kilpatrick/CP)

After a sluggish start to his campaign, and facing repeated questions as to the purpose of this election, Liberal Leader Justin Trudeau has seemingly decided to place his bet on a reliable horse: health care. Banking on the fact that most Canadians like their health-care system, Trudeau is trying to position his party as its true protector, promising $3 billion over four years to hire 7,500 new family doctors and $6 billion to cut down on wait lists. And what better place to make this announcement than Nova Scotia, which has suffered a shortage of doctors for years—and, not coincidentally, surprised the nation by recently electing a Conservative premier? As Erin O’Toole rises in the polls and Trudeau falters slightly, one could imagine the Liberal war room, suddenly worrying about these coalescing trends, pivoting to the good, old-fashioned idea that Liberals like universal health care and Tories, for some reason, do not. This implicit claim was made explicit by Deputy Prime Minister Chrystia Freeland over the weekend, when she tweeted an edited video insinuating O’Toole wanted to bring private health care to Canada. The Tories decried the edit as a gross distortion, and Twitter flagged the content as “manipulated media,” which itself became the story. At his announcement today, Trudeau dodged a question about this mini-scandal—and reiterated Freeland’s claims and portraying O’Toole as the health-care bogeyman. He concluded simply: “I encourage all Canadians to take a look to see what Erin O’Toole has to say about what he sees on the future of health care.” But Trudeau ought to be careful. If polling trends are any guide, Canadians might be in a mood to call his bluff. And they might just like what they see.