Paul Wells: The response to the GG problem is a familiar one for the Trudeau government—nothing is a big, urgent problem until it hits the nightly news 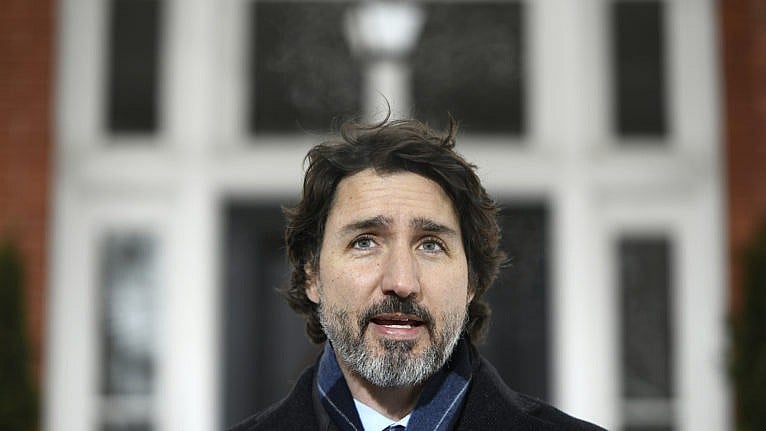 Trudeau speaks during a news conference on the COVID-19 pandemic outside his residence at Rideau Cottage on Jan. 26, 2021 (CP/Justin Tang)

You just don’t get anything done in this town without bold reformers. Justin Trudeau agrees. Why, just take that mess at Rideau Hall, with Julie Payette and the claims of workplace harassment and all that. “When those reports came out in the summer, I knew right away that we needed to call on an independent professional,” the Prime Minister told the Toronto Star on Thursday.

In the interview, the PM takes another few victory laps, asserting that there must be “no workplaces that are too important” and responding well when he “was reminded” that this attitude predates his arrival in public office.

I have some thoughts on timing.

The first report Trudeau is referring to—it ended up being cited in the consultants’ report that precipitated Payette’s resignation—is this one, from Ashley Burke and Kristen Everson at the CBC last July. It’s a fantastic piece of reporting, richly sourced, and after Everson left the story at the end of the summer, Burke kept on reporting about unhealthy workplaces and bad bosses in Ottawa, and not only in the vice-regal parts.

But as Burke and Everson’s own story acknowledged, theirs wasn’t the first report of trouble in Payette’s realm. In 2017, before her installation as GG, iPolitics reported on Payette’s involvement in two situations that had required police intervention. That led Trudeau to state that “the vetting process is deep and extensive, and raised absolutely no issues that would prevent her from being Governor General.”

The National Post published a detailed piece in the autumn of 2018, by Brian Platt and Marie-Danielle Smith; Marie-Danielle has since joined us at Maclean’s. That article had fascinating insider info, but could be summed up as noting that Payette was merely turning out to be, in some ways, a bad fit for the job. It did, however, raise important questions about the vetting Trudeau had praised for its thoroughness.

But the next article was of a different nature entirely. In July 2019, Maclean’s Nick Taylor-Vaisey reported on the latest Public Service Employee Survey, an annual questionnaire filled out by more than 160,000 public servants. Here’s only part of what Nick spotted in that survey:

More than two-thirds of Payette’s team, 112 out of 157 Rideau Hall employees, filled out the survey—and 29 of them reported harassment. Forty-two per cent of those who said they were harassed pointed the finger at co-workers, but 71 per cent blamed their superiors (employees could select multiple options). Two-thirds said harassment took the form of an offensive remark, 55 per cent said aggressive behaviour, and 49 per cent cited excessive control.

These numbers were sharply different from the results the survey obtained while David Johnston was GG. Quickly following a change in management, conditions in a small federal-government workplace changed markedly for the worse.

And then nothing happened for a year.

It’s a bad habit among journalists to credit only work that happens in their own shop and not in others, so I want to emphasize that the CBC’s Ashley Burke has been a rock star on this story. She’s done exemplary work. But Taylor-Vaisey’s story shows that much earlier, mechanisms designed by the federal government to shine a light on  unhealthy workplaces did not produce the results for which the PM now congratulates himself. In the consultants’ survey released this week, there’s mention of the employee survey, and the frustration Rideau Hall staff felt when the concerns in it weren’t addressed.

This is becoming a familiar pattern. Formal channels simply mean less to this government than headlines. Employees raising workplace concerns didn’t produce a change; employees complaining to the CBC about workplace concerns produced a big change.

Similarly, when criminologist Anthony Doob, who was contracted by the federal government to study the state of solitary-confinement reform in Canada’s prisons, complained to the responsible minister (I use the term loosely) that Canada’s prisons were not giving him usable information on solitary confinement, he was ignored. When Doob told the story to Vice reporter Justin Ling, Bill Blair’s office responded promptly—to the story, not to their own expert. I told that story here.

Then there’s SNC-Lavalin. The Attorney General of Canada and her chief of staff told everyone who would listen—sorry, everyone who was supposed to listen—that they were facing undue pressure on a decision that was the AG’s alone to make. But nobody acknowledged the pressure until the story appeared in the Globe and Mail.

This government isn’t strategic, it’s issues management. Its message up and down the chain of command is: don’t bug us unless it’s big and urgent. And then if something is big and urgent, the message is: don’t bug us. And then if something’s on the nightly news, the message is: now we will act, and our action proves our virtue. The clear lesson to anyone seeking change from within this government is: call a reporter.

I would not have felt the need to write any of this if Trudeau had resisted the urge to hand himself a trophy while standing amid the wreckage of his own decisions. This too is familiar. Everything is a learning opportunity. For you, not for him.