Justin Trudeau at the halfway point, or the precipice

Paul Wells: The next two years will be a race between the better angels of the Trudeau legacy and the worse 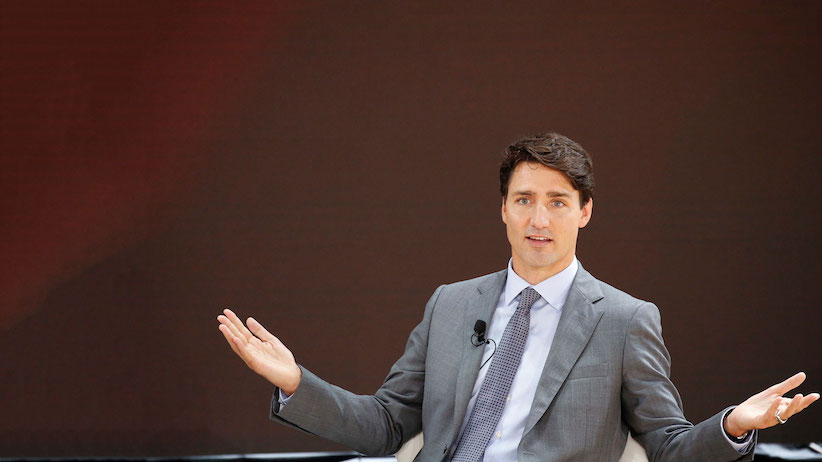 Thursday marks the second anniversary of the Liberals’ 2015 election victory under Justin Trudeau. The first time in Canada a third-place party had ever stormed past an incumbent government and official opposition to take power. Over the preceding decade they had lost four-fifths of the seats they once held, but now they were back. As the red wave crashed in from the Atlantic—taking every seat east of Quebec, most in Quebec, most in Ontario, half in Manitoba and a good share in British Columbia—the Liberals, the party where hope goes to die, seemed authorized to hope again.

The timing is lousy this week for a celebration, and we’ll get to the current mess, boy will we. But the country’s actually in decent shape and the government’s connection to much of the good news is at least arguable.

The IMF hiked its growth projection for Canada this month, after hiking it in July. It’s now 1.1 points higher than what the IMF expected in April. A year earlier, the  now-beleaguered Bill Morneau said he hoped his budget would increase GDP growth by a point, and now this is happening, and maybe it’s just luck. But Stephen Poloz thinks otherwise.

In Montreal, Lightspeed POS, a point-of-sale services firm, is on its way to becoming a billion-dollar startup. In Toronto, Google is building a demonstration village on the waterfront that will probably work in some ways and not in others, but what works can be replicated, scaled up and exported in any number of clean-tech spinoff companies. The feds have chipped in for more than a billion on a light-rail network around Montreal that will transform public transit in that region on a scale not seen since the Métro was built. At just one stop on that projected rail line, a $1 billion private development is now looking more like $1.3 billion as it rushes to make room for prospective tenants.

In Davos, Justin Trudeau met GM CEO Mary Barra; five months later GM announced it will hire hundreds of engineers to build self-driving cars in Oshawa. At Davos he met Thomson Reuters CEO Jim Smith; the company’s new Toronto technology centre is on track for 1,500 employees. Microsoft is building big in Vancouver, talent is starting to move toward the artificial intelligence Bat-signal. Important Trudeau government initiatives have sought to attract investment and simplify the hiring of highly-mobile knowledge workers, at precisely the moment when Donald Trump’s administration is telling them they’re not welcome. And if the Liberals’ new infrastructure bank actually attracts deep-pocket global institutional investment—a big ‘if—Canada could soon be at another level as a global magnet for both human capital and public infrastructure.

Immediately on taking office, the Liberals delivered a new child benefit that makes a big difference for a lot of Canadian families. They passed an assisted dying law that is often criticized as a half-measure but represents real progress over the chaos they inherited. They radically increased the number of supervised consumption sites so thousands of drug addicts can stay alive tonight and hope to get better amid a terrifying crisis of opioid overdoses. They saved CETA. They cut deals with every province for a dedicated mental-health transfer, and when I made fun of the indelicate federalism of that deal, Jane Philpott called me up to insist, real emotion in her voice, that it will make a long-overdue difference in the lives of beneficiaries. She is probably right. Trudeau is lucky to have Philpott in his cabinet, and, knowing it, he has given her harder work.

All of this is to say that, when people airily claim this government has gotten nearly nothing done, I can’t agree. To some extent the next two years will be a race between the better angels of the Trudeau legacy and the worse. Having taken some almighty whacks at the worse in recent weeks, it’s only fair to remind everyone of the better.

The worse continues to pile up. I see no way the rushed and timid legalization of cannabis will drain the black market and, in hardening more penalties than it relaxes, it seems certain to provide busywork for police who have been asking only to be freed up to tackle more serious problems. (An internal Ontario government memo reaches the same conclusions.)

Since it’s impossible to find anyone in the government who’s conspicuous for saying no to any proposed spending spree, it’s a near dead-lock certainty that Canada will become a nursery for white elephants—and, unless this generation of public administrators is luckier than any previous generation, for corruption, somewhere in the system.

The government’s appointments system is, as one former staffer told me this week, “just a little f–ked,” with backlogs as far as the eye can see. There’s a serious bottleneck for important decisions, with the choke point in the Prime Minister’s Office. Rookie ministers, which is most of them, are held close. Those who don’t perform are sent new staffers from the PMO: career growth comes from the centre, not the bottom.

A cabinet full of political neophytes—and there is nothing Trudeau could have done to avoid that, given how few seats he had before 2015—has been trained to cling for dear life to talking points. The result is unsettling: most of the cabinet simply ignores any specific question and charges ahead with the day’s message, conveying the unmistakable impression they are not as bright as—given their achievements before politics—they must surely be. Or that they think their audience isn’t. I doubt this is what anyone intends, but by now it’s deeply baked into the learned reflexes of this government.

Then there is this tax mess. I’m agnostic on the policy question: in my own life I’ve been spectacularly unimaginative in organizing my finances for minimal taxation. I put all the book money into RRSPs, called my condo an office for the two years I used it as one, and that was the end of that. But the summer tax adventure has left the Liberals with their hair on fire, for two broad reasons. One is that Bill Morneau’s personal financial arrangements are becoming surreal. The other is the way the project—and especially the life stories of its stewards, Trudeau and Morneau—undermined the Liberals’ claim to be champions of the middle class.

The claim was always shaky. Trudeau opened his speech to the 2014 Liberal convention in Montreal by describing a young mother named Nathalie, whose distinguishing characteristics were that she made $40,000 a year, that she worried a lot, and that she didn’t exist.

WATCH: The opposition turns up the heat on Monreau

Nathalie was a composite character invented to illustrate Trudeau’s claims about the middle class, including stagnant wage growth. The Laval University economist Stephen Gordon showed that Nathalie’s family income, if she were a person, has probably grown by nearly 30 per cent since 1997. The real reason we never heard from Nathalie after the convention, however, is probably that the Liberals’ so-called middle-class tax cut wouldn’t much help her: “In both absolute terms and as a percentage of income, someone earning $150,000 gets more than someone making $50,000,” Gordon wrote.

Still, the Liberals charged ahead with approximate remedies to oddly-defined problems. In March Jean-Yves Duclos, a shy and likeable former head of the Laval University economics department, held a news conference to demonstrate the government’s work for the middle class. He offered no definition of “middle class” and no detailed description of what the government has done, or of what effect it’s had. “There are Canadians that feel that they belong to the middle class for perhaps reasons beyond their level of consumption and income,” Duclos actually said.

Soon after, Morneau endorsed this political economics of mood: “When we look at what’s gone on around the world, is there anybody who questions that we should be focused on how people feel? What are the outcomes if we don’t? So I think we’re going to stay on that message.”

This is how a party that called for evidence-based policy swiftly graduated to defending feelings-based policy. This is how you get a government that sets out to correct a boom in incorporations spurred by the gap between personal and small-business tax rates, then ends up increasing that gap and abandoning most of the tools it chose to combat the trend. It’s how you get a minister who spends July, August and September attacking loopholes and October watching his colleagues defend his use of loopholes. It’s what happens, or probably should, when the very rich launch a campaign against the tax advantages of the somewhat rich for the purpose of impressing a police-sketch hunch about the middle class.

I have no idea how this ends. Historically, first-term majority governments usually get elected to a second term, whether majority or minority. Historically, if you’ve been waiting impatiently for a government you hate to get its comeuppance, you’re probably a poor judge of whether that’s about to happen. Trudeau’s governing mandate is designed to be backloaded with exciting announcements: by 2019 Canada’s skyline should be so studded with construction cranes it’ll look like a live-action version of Blade Runner. So don’t count the Trudeau Liberals out.

But it’s hard to be entirely saddened by Trudeau’s current discomfort, which if nothing else might shake his team out of the towering sanctimony that characterizes too much of its action and rhetoric.