'Justin Trudeau does not do shakeups': A fact-check

Paul Wells: He does shakeups, all the time. But there's no use for one that brings in more people with the same flawed assumptions that have characterized this campaign. 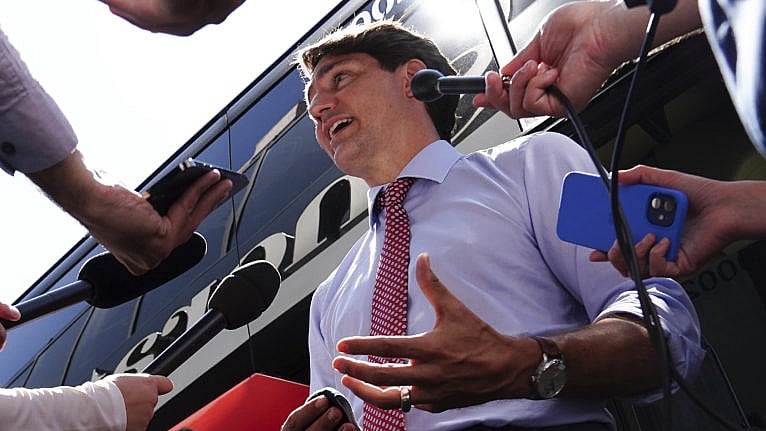 Fascinating read from the Toronto Star this morning, as Liberals try to decide how worried to be. I think that, taken at the average, they reach the appropriate answer: only moderately worried. A lot of possibilities remain for saving Justin Trudeau’s campaign from ignominious and surprising defeat. And even if none of them end up working, well, as Mark Rylance’s character keeps asking in Bridge of Spies, would worrying have helped?

The Star piece talks to several candidates about the campaign’s first tough 10 days. Their remarks range from blandly reassuring to darkly comic. I especially like the candidate who says their pitch to voters is, “You can still both vote for me and hope that there’s someone else as prime minister, if that’s really your goal.” It’s a big tent. Flexibility is good.

I admit I was surprised to read one comment, however:

“Justin Trudeau does not do shakeups,” said a senior Liberal official speaking on background. “That is not in his nature.”

The Star offers few hints about who this official might be, though they do say it’s someone “senior” and the quote comes in a section of the story dealing with “those running the national Liberal campaign.” Kind of sounds like it’s somebody who might be shaken up, if it were in Justin Trudeau’s nature to do shakeups.

Let’s pause briefly to inquire into the Prime Minister’s nature.

In 2014, he ejected every senator from the Liberal caucus, reducing the size of that caucus by more than half. The Globe called the move “Trudeau’s shakeup.” In 2015 Liberal campaign co-chair Dan Gagnier resigned from the campaign days before the vote, after he wrote a letter to private-sector clients advising them on how to deal with an eventual Trudeau government.

Freshly elected and barely past the new year in 2016, Trudeau fired his Clerk of the Privy Council by news release while traveling and installed a new one. “PCO shakeup leaves some government experts wondering,” the Hill Times wrote. The Globe‘s Robert Fife reported that the outgoing Clerk, Janice Charette, “had run afoul of the Prime Minister’s Office when she expressed concerns about the appointment of Mr. Trudeau’s campaign policy adviser, Matthew Mendelsohn, as a deputy clerk of the PCO.” So this shakeup resulted when somebody opposed the other shakeup, you might say.  That February shakeup led to a March shakeup of next-tier public servants.

The election of Donald Trump led to what the Star called a “Trudeau cabinet shakeup” at the beginning of 2017. If anything the term was an understatement: two of the most experienced ministers in cabinet, John McCallum and Stéphane Dion, were ejected to foreign postings, Dion’s so weird—a simultaneous appointment to Berlin and Brussels that the European Union ended up rejecting—that Dion vanished for days from public view before finally accepting the gig. Word leaked later that Dion’s crimes against lèse-majesté included asking difficult questions to colleagues at cabinet meetings. Can’t have that! Shakeup time!

Six months later, in mid-2017, Trudeau split the Indigenous Affairs department into two departments, a major effort rarely undertaken by any government, in a “larger-than-expected”  cabinet shuffle. Here he is explaining what the CBC called that “shakeup.”

Fast forward to January 2019 and the shakiest shakeup of all the shakeups. Trudeau moved Jody Wilson-Raybould from Justice and, ahem, Attorney General to Veterans Affairs. CTV called the shuffle a “shakeup” and noted that the PM had explained he needed to move Seamus O’Regan into Indigenous Services because clean drinking water on reserves was something that needed to be “done right.” The Globe soon started reporting on other possible motives for the shuffle, and within weeks, in what the CBC called a “major shakeup to the highest reaches of the Prime Minister’s Office,” Gerald Butts became a free agent.

Onward to 2020. Trudeau fired his finance minister and “accepted” the deputy minister’s “resignation” in the middle of a historic fiscal crisis. Here’s Bloomberg on that “shake-up” (Bloomberg prefers the edgy hyphenated spelling).  The new deputy minister was Michael Sabia, whose arrival at and departure from the Canada Infrastructure Bank had occasioned two shakeups in a row.

Three days before the start of the current election campaign, which is being run for the Liberals by Azam Ishmael—the party’s 2019 campaign director, Jeremy Broadhurst, is nowhere to be found in the org charts; bit of a shakeup, that—Trudeau announced what the Hill Times called a “major shakeup” in the senior ranks of the public service.

This corner offers no general opinion on the utility or otherwise of shakeups. If you need to make a change, you make a change. If it works, it was a good idea. In the case at hand, I see no point in replacing people with new people who were raised in, and participate in, the deeply flawed assumptions that have characterized this campaign. I’m just more surprised than I probably should be at how it’s possible to rise to a “senior role” “running the national Liberal campaign” and have no idea what the “nature” of Justin Trudeau is. The good news for that person is, such determined misapprehension is likelier to cement a role in the circle closest to this PM than to endanger it.

One more thing. What Justin Trudeau is trying to do this year is actually without precedent in his lifetime.

He’s trying to use an unforced election at a moment of his choosing to grow from a minority government to a majority government. Minority governments calling elections on their own schedule, purely because the Prime Minister likes his chances, are actually not common in Canadian federal politics. Since Trudeau was born in 1970, only two prime ministers have tried it: Stephen Harper in 2008 and Justin Trudeau two weeks ago. It didn’t work for Harper in 2008. He ignored his own fixed-election-date law, was badly sideswiped by a global fiscal crisis, and was lucky to hang on with another minority government. We’ll see how Trudeau does.

Every other minority-Parliament prime minister in Trudeau’s lifetime has governed until he lost a confidence vote in the Commons: Pierre Trudeau in 1974, Joe Clark in 1979, Paul Martin in 2005, Harper in 2011. Clark and Martin lost the elections that followed. But the elder Trudeau and Harper won, in part because they were able to present themselves as dutiful defenders of continuity whose work was being interrupted by opportunists. “I was right in the middle of something,” both prime ministers said in effect, “and these jerks on the other side of the aisle got in the way of that. Send them a message. Send me back with reinforcements.” (In Pierre Trudeau’s case in 1974, that stance was a fib: he had designed the 1974 budget to be unacceptable to both Conservatives and New Democrats. But their votes against the budget made them, at least, partners in the timing of the election. The responsibility wasn’t his alone.)

Liberals have been dreaming, publicly, since May of 2020—two months into this terrible global health crisis—about how exciting it would be to run for re-election as the stewards of a bright new future. “Justin Trudeau seems to really grasp the immensity of the moment, how important it is for his political legacy, and we’ll have a plan that will be exciting to put to Canadians at the next election,” one Liberal told Le Devoir way back then. No shakeup can fix judgment like that.