Paul Wells: In an extraordinary day on Parliament Hill, Andrew Scheer got shut out of protest talks and the PM put a big bet on patience 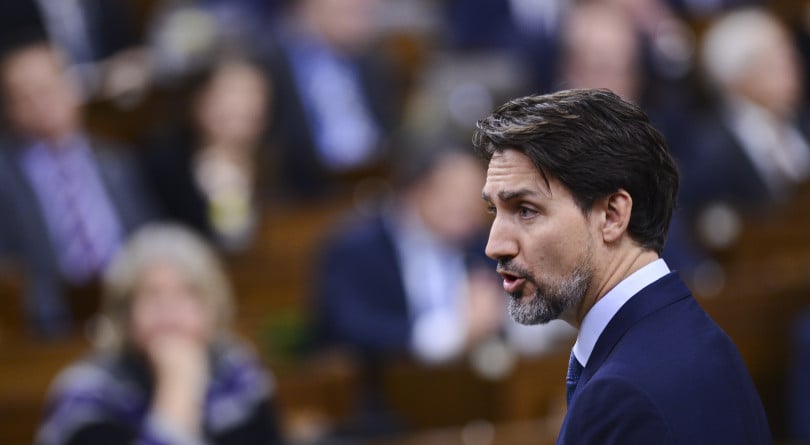 Trudeau delivers a statement in the House of Commons on Feb. 18, 2020 (CP/Sean Kilpatrick)

“People are troubled by what they have been witnessing this past week,” Justin Trudeau told the House of Commons.

“Young, old, Indigenous and newcomers are asking themselves what is happening in this country. They are asking what lies ahead for themselves, for their communities and for Canada.” These people know that “these protests are serious and that this is a critical moment for our country and for our future,” the Prime Minister said. “So do I.”

“These protests” was as close as the Prime Minister would come to defining what, precisely, this serious and critical moment is. And when, in his next breath, he said “This is about things that matter,” he would not be rushed into offering a rank ordering of these mattering things. Instead he deployed them as a cluster: “Rights, livelihoods, the rule of law and our democracy.”

And again, a little later, the Prime Minister offered a list of the competing claims in the protests by some Wetʼsuwetʼen, Mohawk and other activists against a natural-gas pipeline, without presuming to rank them. “Indigenous rights, climate action, law and order and building a clean economy are things we will not achieve by degrading our democracy.”

What happens when rights and livelihoods conflict? When “law and order” and “climate action” face off, and it’s not even clear which side “building a clean economy” is on? Trudeau put some energy into contradicting himself. “It is past time for this situation to be resolved,” he said. But “patience may be in short supply—and that makes it more valuable than ever.” He used the word “solution” nine times and “resolve” six.

And then he spoke about the importance of Parliament. “The place for these debates is here in this House,” the PM said. “The place for these debates is around kitchen tables and community centres in this country. Yes, there is always a place for Canadians to protest and express their frustrations. But we need to ensure that we are also listening to each other. The reality of populism, and its siren song in our democracies these days, is a desire to listen only to themselves and to people who agree with them, and not to people of another perspective.”

Having delivered this ode to the House of Commons and for listening to people of another perspective, Justin Trudeau left the House for a meeting with the three party leaders closest to his perspective. Not invited: the leader of Her Majesty’s official opposition.

What had Scheer said? Well, a lot. That Trudeau’s speech was a “word salad” and “the weakest response to a national crisis in Canadian history.” That it was missing “a clear denunciation that the actions of these radical activists are illegal.” That a “mob” of “radical activists” was “trampling over the legal system which has governed our country for more than 150 years.”

The other opposition leaders—the Bloc’s Yves-François Blanchet, the NDP’s Jagmeet Singh, the Green Party’s Elizabeth May—concentrated on Trudeau and the Liberals in their own remarks. By and large they accused him of having taken the protests too lightly at first, and of not having done enough to address Indigenous concerns. “It is inspiring to see the youth rising,” Singh said cheerfully. But the prospect of a meeting with the PM afterward made them refocus their criticism. Meeting reporters after the closed-door meeting, Singh called Scheer’s speech racist.

This was one of the most extraordinary days I’ve seen in a long career on Parliament Hill. And there was a lot going on. Let’s try to unpack it.

First, whoever decided Trudeau should call a quick reunion of the 2008 coalition team was displaying a certain tactical deftness. In fact, isolating Scheer was just about the only evidence we’ve had in many months that this government knows how to improvise on its feet. By Question Period, a half-hour after the Isolate Scheer Summit ended, the Conservative leader was conspicuously nervous, edgy. He surely hadn’t planned to be so starkly on one side of a polarized argument.

Now would perhaps be a bad time to remind Scheer that, in a roughly comparable moment during a Conservative majority government—the Idle No More protests of 2012-2013—even Stephen Harper was more reluctant to treat protesters as a mob of radical activists trampling the law. He met a delegation led by the Assembly of First Nations. His calls for protesters to obey the law, while more pointed than Trudeau’s on Tuesday—now that’s clearing a low bar—were still quite bland. People who have to actually think about how a big and complex country will be governed are usually more restrained in their language than Scheer was on Tuesday morning.

Second, the fact remains that Scheer’s speech acted as a kind of precipitant that gave meaning, where meaning had been starkly lacking, to Trudeau’s remarks. The Prime Minister asked for prime time in the Commons to weigh in on “a critical moment.” His words. And when he took his seat at the end of his remarks, it was impossible to say what the hell he had been talking about. Scheer had the effect of forcing the rank ordering that Trudeau had been so eager to avoid, as follows: livelihoods and “law and order” will have to wait. Climate action and Indigenous rights, as defined by whoever shows up to protest, will have their day for a while longer.

But that’s the third thing: the patience Trudeau used as the criterion by which he justified isolating the largest opposition party has not so far earned great dividends. It’s becoming increasingly obvious that nobody wants to meet Carolyn Bennett, the titular minister of Crown-Indigenous relations, despite Trudeau’s repeated offer of her time and presence. It’s hard to imagine the protesters suddenly deciding the pipeline is fine.

I’m less of a law-and-order stickler here than a lot of my colleagues in the nation’s opinion columns. You don’t have to cover police work in Montreal for long, and I didn’t, before you run across any number of tense standoffs between the forces of order and various forces of political contestation. They’re inherently political events in which police action operates only intermittently, if at all. I know one person who spent months showing up for street protests and got herself elected premier of a province. Patience is sometimes wise counsel, and if it leaves the impression of a country in chaos sometimes, well, there are countries where police behave in more predictable ways, and I’ve rarely felt the urge to move to one.

But that, in turn, leads to the fourth thing I find myself thinking about today. Patience is a virtue if it works. If the pipeline protesters’ attention flags, or they become so grateful for Trudeau’s verbal generalities that they agree to meet his minister and abandon their protests, then the excitement’s over and sunny ways have won another quiet victory.

Will Trudeau always be eager to put patience ahead of a smoothly functioning transportation network? Will there come a day when it’s, say, Jagmeet Singh whose attitude disqualifies him from Trudeau’s good graces? When even a Liberal government must act, more in sorrow than in anger, to make sure the trains run? I don’t know, and it’ll be best if this Gordian knot unties itself before we find out. But it wouldn’t be the first time this government has swallowed itself whole.