Oct. 30: Trudeau's defence of the statistical agency's plan to collect personal financial information includes a trip down memory lane to the Harper years. It's a common theme. 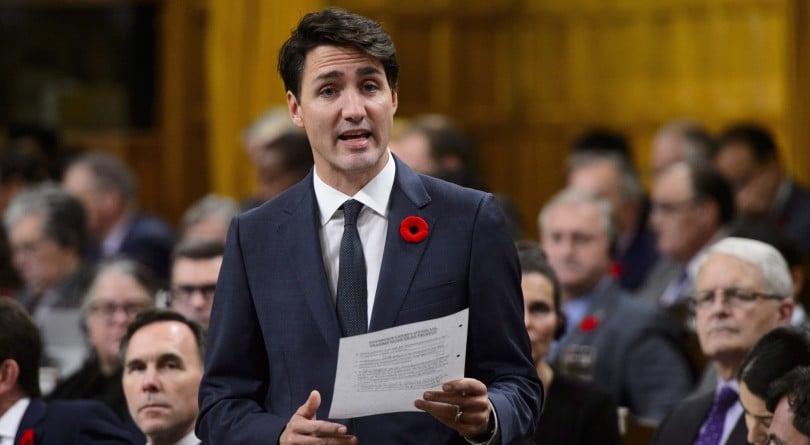 Prime Minister Justin Trudeau stands during question period in the House of Commons on Parliament Hill in Ottawa on Monday, Oct. 29, 2018. THE CANADIAN PRESS/Sean Kilpatrick

It’s easy to get discouraged by the sniping that passes for political debate these days. But with less than a year to go before the next federal election—one that both Justin Trudeau and Andrew Scheer warn will be “nasty”—we offer a respite from the partisanship: our annual Maclean’s Parliamentarians of the Year awards.

The event will take place Nov. 5 at Ottawa’s Chateau Laurier, and awards will be handed out in categories such as best orator, most knowledgable MP and of course the overall Parliamentarian of the Year, all voted on by MPs themselves. We’re also doing something different this year, and announcing the three finalists in each category in advance. Check it out. (Maclean’s)

Now, back to the sniping.

Trudeau is standing by Statistics Canada‘s push to gain access to the bank accounts of hundreds of thousands of Canadians. As Global News reported last week, the agency plants to gather information like financial transaction, bank balances and income history from a random selection of 500,000 Canadians each year to build a “new institutional personal information bank,” since response rates to traditional surveys are so low, and falling. Under assault from Conservatives in question period—”Why are the Liberals collecting the personal data of Canadians without telling them?” Candice Bergen asked—Trudeau defended the plan: “High quality and timely data are critical to ensuring that government programs remain relevant and effective for Canadians.” (Global News)

Trudeau also tried to counter the attacks by bringing up the previous Conservative government’s decision to scrap the long-form census, and said criticism of StatsCan’s new initiative is a continuation of “their attacks on data and information.”

Trudeau blaming the Harper government for stuff has been a bit of a thing of late. In putting off a decision about banning arms exports to Saudi Arabia in the wake of the murder of journalist Jamal Khashoggi, Trudeau has repeatedly warned that breaking a $15-billion contract for light armoured vehicles would cost Canada “billions” because of the terms agreed to by the Conservatives in 2014. But Ed Fast, who partly oversaw the contract as Tory trade minister, says the political situation in Saudi Arabia has changed a lot since then, and it’s Trudeau’s deal now. “Prime Minister Trudeau has to make his own assessment – not blame the previous government, which made its own assessment.” (Globe and Mail)

Congratulating Brazilians for their “strong democratic convictions” is about all the enthusiasm Foreign Affairs Minister Chrystia Freeland can muster for the election of far-right leader Jair Bolsonaro as president-elect. (CBC News)

The Trudeau government has laid out its plan to close the gender pay gap, at least among federal employees and those working in federally-regulated sectors like banking and telecommunications. Once enacted, the new Pay Equity Act will give employers three years to come up with a plan to pay employees equally, and require them to review pay levels in their organization every five years. (CTV News)

For background on the pay equity issue, here’s part of our special report from February, when Maclean’s published two versions of the magazine with two different cover prices, to reflect the full-time wage gap between men and women. (Maclean’s)

Lastly, with All Hallows’ Eve fast approaching, Maclean’s has turned our ranking tool to the question that matters most: what’s the best—and worst—Halloween treat out there? Have your say. (Maclean’s)