Canada's Prime Minister sits down for a candid chat with one of Canada’s best political analysts. Watch a replay here. 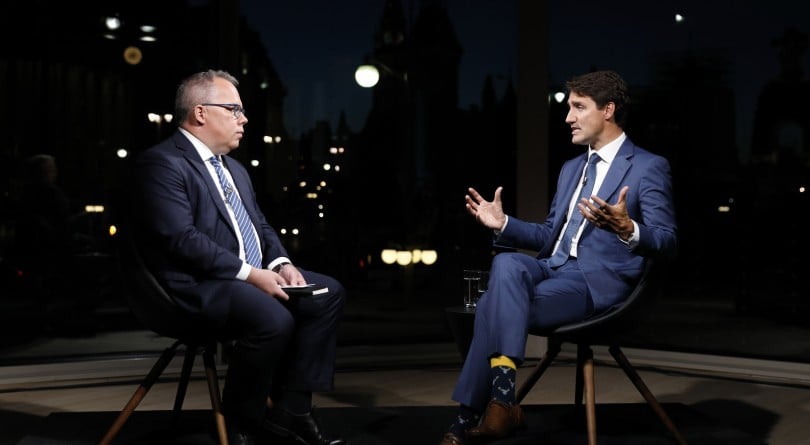 Maclean's Live with Paul Wells and Justin Trudeau at the NAC in Ottawa on Sept. 17, 2018. (Photograph by Blair Gable)

Just as Parliament gets ready for what will certainly be a raucous autumn, Prime Minister Justin Trudeau sat down for a live interview with Maclean’s senior writer Paul Wells at the recently renovated National Arts Centre in Ottawa—the sixth of a monthly series of conversations presented by the Canadian Bankers Association in partnership with the NAC and CPAC. Watch their conversation right here. Tweet along with the hashtag #MacleansLive, and follow our liveblog below for all the highlights. Also! Sign up for our daily politics newsletter, a morning must-read in the nation’s capital.

Why are we doing this, anyway?

Summer breaks aren’t supposed to give governments headaches, but the months between Victoria Day and Labour Day weren’t kind to the Liberals. Trudeau found himself fending off opposition attacks on the troubled Trans Mountain pipeline, an explosive debate over asylum seekers at the border, and even the future of NAFTA—an issue on which Ottawa had previously maintained a fragile peace.

The next federal election is still over a year away, but it’s already on everyone’s mind in the nation’s capital. Can Trudeau’s sunny-ways brand win again? Does Conservative leader Andrew Scheer’s secret weapon have what it takes? What about that new threat on the Tories’ right flank? What will define the next election, anyway? Those questions set the stage for Maclean’s Live.

Trudeau’s conversation with Wells, one of the country’s best-known political analysts and reporters, and the host of the Maclean’s National Leader’s Debate during the 2015 federal election, covered a variety of topics and include audience questions.