It’s hard to miss the change in tone over just the last week, amidst a disastrous visit to India: the Prime Minister's glow has faded 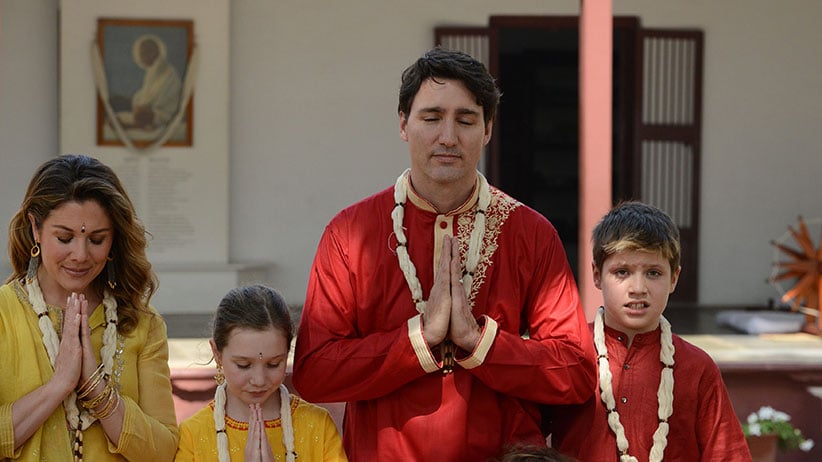 The foreign press does not love Justin Trudeau, not any more.

Outside our sea to sea to sea boundaries, Trudeau has received substantially positive coverage, particularly in the immediate aftermath of the U.S. presidential election, when he provided an effective visual and political counterpoint to Donald Trump. Rolling Stone wondered why he couldn’t just be in charge south of the border instead, Vogue published some glamour shots of the prime minister and his wife, and his sock game was analyzed by Vanity Fair, GQ and InStyle. The Economist, fans of all things small-l liberal, proved a fan of this big-L one, putting Canada on its cover.

All this glowing prose had some in Canadian media (*coughs*) pleading with their international counterpart to desist from the fawning and examine Trudeau in his proper, domestic, context. The message seems to have taken—and how.

The prime minister’s ongoing visit to India has been met with a notably downbeat and at times snarky reception from the foreign press.

The first wave of stories focused on the Trudeau family traipsing across the country largely unencumbered by the presence of high-level Indian officials. CNN reported that the prime minister was being “snubbed,” and the Washington Post sought to explain why India was being “really rude.” Al-Jazeera also deployed the dreaded “s” word.

It’s worth noting, as financial journalist Kevin Carmichael (always well informed on Canada and India) did, that many of those headlines had the feel of “follow-the-leader reporting,” with one outlet after another calling the same two commentators to pick over the same morsel of news. In this case, the proximate cause of the coverage was Indian prime minister Narendra Modi’s no-show at the Trudeaus’ airport arrival, something that’s actually in line with protocol. (But Modi came out for Barack Obama and Israel’s Benjamin Netanyahu, you and Candice Malcolm say! Yes, well, those countries actually matter to India’s strategic interests.)

But the pile-on is notable in and of itself. And in a funhouse mirror of the lavish analysis of his sock diplomacy, the Prime Minister’s sartorial stylings on this trip have been panned by the press and in numerous Indian expats’ family WhatsApp groups. The Trudeaus have been appearing at events decked out in salwar-kameez and kurta-pyjama combos that are straight out of a particularly saturated Indian wedding. (Let’s stop calling it “traditional Indian dress” though—there are more ways to tie a sari than a tie, and the Trudeaus’ itinerary and outfits are north and west India-only affairs).

The Irish Independent handily compiled some style tip tweets, while the BBC called his wardrobe “Bollywood.” Again, Carmichael is a worthy counterpoint, noting that the shots of the Trudeaus at various Indian landmarks would probably stick in the memory of the local public longer than any actual news coming out of the trip.

The inviting of a man convicted of attempting to assassinate an Indian state cabinet minister to two events on Trudeau’s Indian itinerary, incontestably a debacle, also did not escape attention. Broken by the CBC and the Toronto Sun. The Guardian said the episode had “overshadowed” the trip.

International outlets, to be fair, are drawing inspiration from the notably unimpressed stance being struck by the Indian press. The Hindustan Times newspaper talked to some Canadian critics of the prime minister, while Outlook magazine asked if his outfits are “too flashy even for an India.”

The Indian media may actually have been among the first to turn on Trudeau. His election win got plenty of positive press, but by last month Outlook was running a cover story accusing the Liberals of supporting Sikh secessionism. That India is a country where powerful politicians and their familiars use defamation cases and injunctions to have articles investigating their conduct pulled down, journalists are beaten and killed and the word “presstitute” is common seems neither here nor there.

It’s also true that some foreign outlets were never too fond of the prime minister in the first place. He’s totally ideologically wrong for Fox News, for example, which made a big brouhaha of his “peoplekind” quip. The rightwing American outlet went so far as to claim that Donald Trump Jr. was “stealing the spotlight” from Trudeau with his coinciding India visit, seemingly mostly on the basis that the president’s son was “announced with glossy front-page ads in major Indian newspapers,” which is sort of like claiming you’re the best athlete in the world because you bought yourself a trophy that says so. And Canadians have used the op-ed pages of international newspapers to criticize the prime minister, from both the right and left, and sometimes in a way that suggests they know even less about Canada than their intended audience.

Still, it’s hard to miss the change in tone over just the last week. Trudeau’s glow has faded.

There was some good news for the prime minister on Thursday, however. Five days into Trudeau’s visit, the social media-savvy Modi finally tweeted about it, recalling their meeting in Canada in 2015 where he pulled on the first daughter’s ears. (This is a thing he does to children, for some reason).

I hope PM @JustinTrudeau and his family had a very enjoyable stay so far. I particularly look forward to meeting his children Xavier, Ella-Grace, and Hadrien. Here is a picture from my 2015 Canada visit, when I'd met PM Trudeau and Ella-Grace. pic.twitter.com/Ox0M8EL46x