Ahead of a meeting with the premiers, the Prime Minister spoke about economic issues: trade barriers, consistent carbon prices, and the pipeline approval process 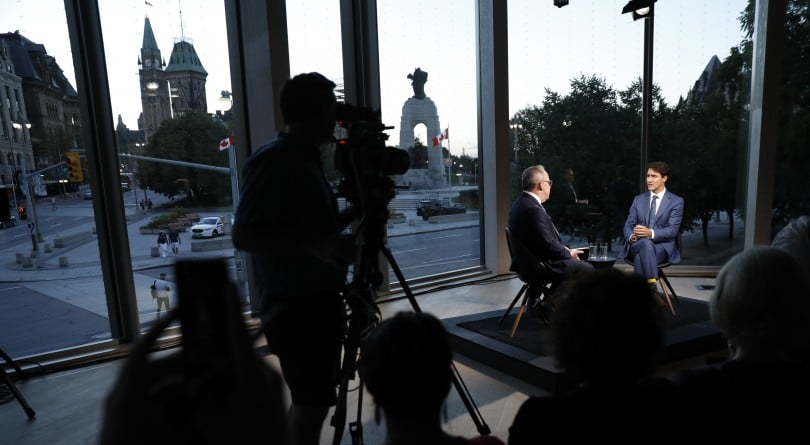 Prime Minister Justin Trudeau in conversation with Paul Wells at Maclean's Live at the NAC in Ottawa. (Photograph by Blair Gable)

As he prepares for a meeting with the premiers later this fall on economic issues, Prime Minister Justin Trudeau said in an hourlong Maclean’s Live interview that he’ll be pressing for what he called the “easy-win scenario” of bringing down trade barriers among provinces.

It was a rare chance for Trudeau to highlight a chance for economic progress at a time when relations between Ottawa and some provinces on hot-button economic files—especially around energy and the environment—look increasingly strained.

The Prime Minister, answering questions from Maclean’s senior writer Paul Wells, spoke at length on those tensions, too. Here are highlighted from those parts of the interview:

“Reducing some of those internal barriers to trade is an easy win scenario for Canadians, for workers, and for our economy.” @JustinTrudeau on internal trade barriers inside Canada, on #MacleansLive: https://t.co/o7kNdAoTpN pic.twitter.com/NWUj0LNSpo

Provinces should be as open to each other as they are to, say, Europe

“We are focused on the thorny issue of internal trade. Actually CETA [the Canada-European Union Comprehensive Economic and Trade Agreement] sort of highlighted it for a lot of folks, where suddenly people in Europe had better access to certain opportunities in Canada than one province had for another. As we talk about diversifying trade, as we talk about reducing barriers and gaining efficiency in the Canadian economy, reducing some of those interior barriers to trade is an easy-win scenario.”

“I’d rather work with the provinces, but if they’re not going to be fair…the federal government has to step in and hold the federation together.” @JustinTrudeau on the provinces opposing the national carbon plan: https://t.co/o7kNdAoTpN #MacleansLive pic.twitter.com/b3lIFnn8c4

Insisting on national carbon pricing to “keep the federation together”

“I’d rather work with the provinces. But if they’re not going to be fair, and they’re going to let their neighbours put a cost on pollution, while they still make it free for their heavy emitters to pollute, the federal government has to step in and hold the federation together by saying, ‘No, everyone has to have equivalent [pricing].”

.@JustinTrudeau on #TransMountain, on #MacleansLive now: “My preference is to get this done in such a way as, not just for this project but for any future energy or infrastructure projects, we have a clear path and clarity.” https://t.co/C7qfTzFVHt pic.twitter.com/nuMFhUl0Al

“The fact that the Federal Court of Appeal came back with a clear sort of roadmap and said, ‘Yes, you did some consultation with Indigenous people, you didn’t quite go far enough, this is what you need to do. And, yes, you examined the environment impacts and science, but you didn’t do this part of it, which you need to do’—that’s almost a really good thing. I mean, super frustrating, because we’d much rather not have had that decision! But having had that decision, they said if you do these two things, the approval works. That’s one of the first times we’ve had clarity around that.”