Justin Trudeau on courage and standing up for gender equality

'Equality ... is not a threat. It is an opportunity.' A transcript of the Prime Minister's remarks from the Catalyst Awards gala 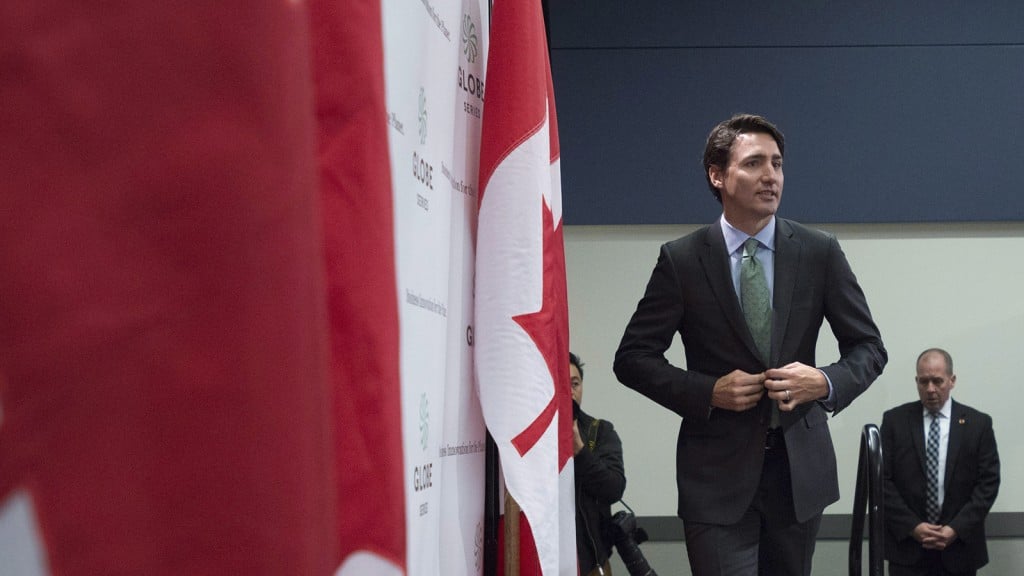 Prime Minister Justin Trudeau was in New York City on Wednesday night, where he announced that Canada was putting its name forward for a seat on the United Nations’ Security Council. He also received a special commendation for forming a gender-balanced cabinet from Catalyst, a non-profit focussed on the progress of women. Below were his remarks from that gala.

Thank you so much, John, for that kind introduction.

I also want to thank Catalyst—its directors, advisors, staff and volunteers—for putting on this tremendous event.

And thank you to each and every one of you for being here with me tonight.

When I was looking over the schedule for today’s conference I was impressed by the core themes that were selected. Or more specifically, by the words that were used to describe the important work that your organizations are doing, and hoping to do more of.

These are the kinds of words—the kinds of values—that build better communities. Whether it’s the business community and all those you serve, or the political world and the citizens that we serve.

Tonight, I’d like to talk about those four values, and the ways in which my new government is working hard to make them a reality.

Sophie is a phenomenal mother, a fearless partner, and a committed advocate for issues facing women and girls. Tomorrow, she’s speaking at the Not The Cost event, hosted by the National Democratic Institute.

Sophie inspires me to be better, and to work harder, each and every day. I would not be here in front of you tonight without her leadership and her example.

Thank you, Sophie, for sharing this journey with me.

As you know, “empowerment” is one of those concepts that’s easy to talk about, but challenging to put into practice. Anything that fundamentally shifts a power balance is going to take time, and a lot of hard work.

I know this firsthand. I’m here this evening because I helped to bring about Canada’s first-ever gender-balanced Cabinet. But we arrived at that goal only because of the years of effort that preceded it.

Here’s an interesting fact: studies have shown that women are 50% less likely than men to consider themselves potential candidates for elected office. We didn’t need a study to tell us that, though. We saw it firsthand every time we asked women to run.

When we’d ask a man if he wanted to run for office, he’d most often say, “When do I start?”

But we found that when we asked a woman the same question, her first reaction was different. Most often, it was surprise. She’d ask if we were serious. She’d want to know why we thought she was qualified for the job.

I hear from business leaders all the time that they encounter a similar reaction when they’re recruiting for executive and director positions. So it’s not just politics where this is a problem.

What we did to try to make a difference was launch a campaign called “Invite Her to Run.” We reached out through social media and other channels to ask Canadians to invite women they knew—women who were already making their mark as hard workers and community leaders—to put their name forward and run for office.

And to help interested women follow through, we had a process in place to help them figure out the next steps.

Other women came to public service after being asked… repeatedly.

Take, for example, our fantastic Minister of International Trade, Chrystia Freeland. She and I had many long conversations about the reality of working in politics, and what the demands would be. I’m delighted that she decided to run, and she’s been an invaluable member of our team ever since.

That’s an example of one specific program that I think has made a real difference. But as I said earlier, we are all accountable to future generations for the decisions that we make today.

As many of you know, I am a feminist, and proud to call myself one. I believe that women can do – and be – anything they want. But I also know that meaningful cultural change can’t and won’t happen when only half of the population works toward that change. Men need to act, to set examples, and be role models, too.

My wife, Sophie, recently reminded me of this very point. I’ve always tried to make sure that my daughter feels empowered, that she understands that her gender does not – and should never – determine the limits of what she can accomplish. But Sophie reminded me that I need to spend just as much time and effort engaging my sons, talking to them about feminism and the importance of equality.

Men have a critical role to play in demanding and supporting this societal shift. We need to speak out in support of gender equality, and we need to get comfortable identifying ourselves as feminists.

Because at the end of the day, we are all accountable, women and men. We are all responsible for making sure that the change we want to see around the boardroom table is a topic of discussion around the dinner table.

Our daughters and sons deserve nothing less.

The third value, courage, is ostensibly why I’m here this evening. I say “ostensibly,” because while some might see establishing gender equality around the cabinet table as a courageous move, it’s not actually a frame that I’m really comfortable with.

Is it courageous to want to have government leadership that more accurately reflects the people they are elected to represent?

Is it courageous to want to diminish barriers by offering our daughters and sons effective and visible role models?

Is it courageous to want to offer Canadian citizens the best possible results, something we know happens when we have a more inclusive, representative approach to leadership?

Now, true courage, if you ask me, is when a woman decides to throw her hat in the political arena—even after witnessing the hostile environment that so often awaits her.

True courage is fighting for that raise, because you know you deserve pay equal—or greater—to that of your male colleagues.

That’s courage to me.

The final value I want to talk about is humility.

Now, it’s important to take stock of the things we’ve accomplished together. A gender-balanced Cabinet, for example, is a huge accomplishment—one that I’m especially proud of.

But in highlighting our victories, we must also remain mindful of the important work that has yet to be done.

Canada has a proud history of strong, ambitious women, standing up and fighting for change. And real, meaningful progress has followed.

But there is still a tremendous amount of work to be done. We need to do more to address issues that negatively impact women each and every day. Issues like pay equity, access to quality child care, and achieving parity, not just in Cabinet, but Parliament as a whole.

And in our humility, we should always remember the extraordinary position of privilege we are in, simply by being gathered in this beautiful room, in this great city. We must use our privilege to be advocates for change, both within our own communities and on the international stage.

We need to remember to always challenge the status quo. It may be what got us to where we are today, but it is our responsibility to be more inclusive, to expand opportunity, and to always demand better—of ourselves and others.

These four values—empowerment, accountability, courage and humility—are not ones that we should embrace because they win us awards, or make us feel better about ourselves.

These are values that we should all seek to embody every day, because in doing so, we help to build a world that delivers on the promise of greater equality.

And equality—whether extended to an employee, a customer, a colleague, or a citizen—is not a threat. It is an opportunity.

Thank you for recognizing the work that my government has done. This recognition is not just an honour. It’s a challenge.

A challenge to create more opportunities for Canadian women and girls to realize their full potential. Tonight, I’m asking you to challenge those around you, your peers, your friends and most importantly the people who are not in this room.

After all, we’re all converts.

And if they ask you if there is truly more work to be done, tell them to ask any woman they know.

FILED UNDER: FOR THE RECORD Justin Trudeau liberal party of canada