Justin Trudeau's latest polite request to intrude on the provinces

Politics Insider for May 26: The PM announces an attempt to persuade the provinces on expanded sick leave, the Harper/media spat just never ends and Rick Pauzé returns home 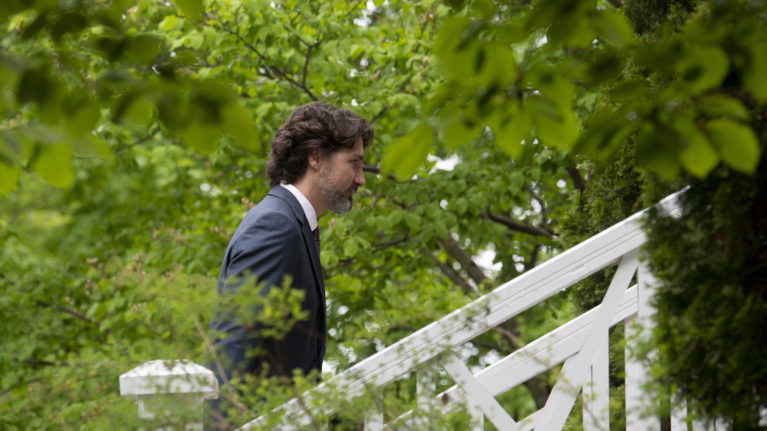 Prime Minister Justin Trudeau leaves a news conference as he return to Rideau Cottage in Ottawa, May 25, 2020. (Adrian Wyld/CP)

Add another federal-provincial project to the list. Prime Minister Justin Trudeau committed to working with provinces on a deal that would see every Canadian guaranteed 10 days of paid sick leave. He credited New Democrats—federal leader Jagmeet Singh and B.C. Premier John Horgan—with pushing the policy. Horgan had the idea first, he said, but Singh applied the parliamentary pressure, using sick leave as a bargaining chip in negotiations on re-opening the House of Commons.

As the elected people in the Commons argued out the details of how exactly they’d keep meeting (read the government’s lengthy proposal to expand the work of the COVID committee), Trudeau made his third announcement on the federal-provincial rent relief program meant to help commercial tenants. Applications are now open, though staggered by province—today is for landlords in B.C., Alberta, Quebec and the Atlantic provinces.

As the PM’s daily Rideau Cottage ritual entered its 11th week, Maclean’s asked the PMO if there was a plan to wind down the morning pressers. The response: keep watching those public itineraries. (He will be out in front of his house again this morning.)

Yesterday, the PM was on the horn with Angela Merkel and Emmanuel Macron, a pair of key European allies who just so happen to sit on the UN Security Council. They agreed on the merits of multilateralism, internationalism and helping vulnerable countries fight COVID-19 (African nations got an explicit mention with Macron, who has made it a priority to reengage with the continent once heavily colonized by his own country. Yesterday was also Africa Day.)

Patty Hajdu live with Paul wells: Tomorrow night at 7 p.m. ET, Paul Wells will sit down with the health minister for an hour-long conversation—via Zoom—about the federal response to the coronavirus pandemic, and the minister’s central role in all the ups and downs. Get all the details here.

Stephen Harper vs. the Media: Every so often, an old video of the former prime minister pops up online and riles up viewers who wish Harper could be forever banished from the nation’s political landscape. It happened again, this time when an American conservative talkshow host’s YouTube channel retroactively posted a chat with the former PM from 2018 (watch it here).

Harper took pains to blame the media, to a significant degree, for his 2015 loss to the hated Liberals. Andrew MacDougall, Harper’s former comms head, writes in Maclean’s that his former boss isn’t the only one stoking the embers of those old flame wars between journalists and governing Conservatives. Journalists aren’t blameless, either, he writes.

Yesterday’s lesson in crisis communications might be that energy ministers should watch what they say on podcasts hosted by the Canadian Association of Oilwell Drilling Contractors. The Globe and Mail paraphrased Alberta’s Sonya Savage as saying it’s a “good time to build a pipeline because public health restrictions limit protests against them.” The quiet part out loud, indeed.

The case for a snap election: Philippe J. Fournier took stock of the recent Abacus poll that gave Liberals a commanding lead over their competition in most regions across Canada. Sure, Tory voters are the most eager to go to the polls. And maybe Trudeau’s soaring approval ratings are only temporary. But still, might the PM be at least a bit tempted to visit Rideau Hall?

Given such strong approval numbers for the Liberals of late and the peculiar eagerness of some Conservatives to return to the polls shortly after their new leader takes hold of the party, the siren call of a fall/winter snap election could become too alluring to resist for the Prime Minister, especially with the dreadful fiscal news that is expected to come in the budget next March.

The Canada Emergency Response Benefit has topped $40 billion in payments, about the same gross total estimated by the Parliamentary Budget office late last month—but long before the program’s eventual wind-up.

Last week, we asked readers to identify the NHL team logo visible on the Senate’s virtual tour of Centre Block. Five readers knew the answer, and Catherine Leroux and Alec Boudreau were particularly speedy. If you’re still stumped, look beneath the clock in the Senate chamber. The official word: “The story is that one of the carvers had a brother who played for the [Ottawa] Senators and, in a burst of home-team pride, he carved the team’s insignia into the woodwork.”

Safe and sound: Regular readers know we’ve followed the story of musician Rick Pauzé, a Canadian crew member aboard the Sea Princess cruise ship who was marooned at sea for months, desperate to return home but unsure when or how he’d get there. Even a typhoon delayed his repatriation. Well, he finally landed in Toronto yesterday—32 minutes ahead of schedule at 4:15 p.m., by way of New York City and Seoul—and is now back home in Wasaga Beach. If you want to celebrate Pauzé’s return, send us a note and we’ll make sure it gets to Rick and his extraordinarily patient wife, Dorothy.