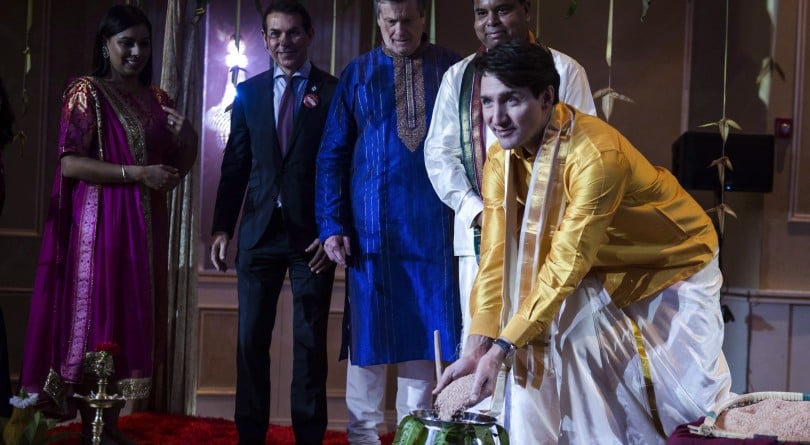 Prime Minister Justin Trudeau and other dignitaries take part in a rice ceremony, marking the start of the Tamil festival, Thai Pongal, in Toronto on Tuesday, Jan. 16, 2018. (THE CANADIAN PRESS/Christopher Katsarov)

A spokesperson for the Sri Lankan government tells Maclean’s the country is concerned that Prime Minister Justin Trudeau repeatedly sidelined the South Asian nation’s majority ethnic group in his festive statements—one of which was described internally as “clearly out of step” by his national security advisor Daniel Jean.

Sri Lanka’s concerns, expressed publicly for the first time, represent yet another South Asian diplomatic hiccup for Trudeau, who, despite a personal charm that has won fans abroad, had a backlash-laden trip to India in February, a matter that also involved Jean.

In May 2016, Jean, then-deputy foreign affairs minister, wrote at least two separate internal briefing notes about the damage to Canada-Sri Lanka relations that could result from the lack of inclusiveness in Trudeau’s greetings for the Tamil New Year, Puthandu, which happens usually on April 14.

Trudeau’s statement—“clearly out of step with the messaging of like-minded countries”—did not mention the Sinhalese Buddhist event Aluth Avurudda, which happens on the same day, according to the briefing notes, obtained under access-to-information laws.

Sri Lanka—majority Sinhalese, minority Tamil and recovering from a civil war—subsequently raised the issue privately with the Canadian government, according to the notes, which were addressed to then-Foreign Affairs Minister Stephane Dion.

It is unclear if the notes’ contents ever made it to Trudeau, who, despite his progressive image of valuing cultural diversity, did not appear to have heeded Sri Lanka’s concerns or listened to Jean’s advice. Trudeau issued statements for the Tamil New Year in 2017 and this month again without mentioning the Sinhalese event.

A spokesperson for the South Asian country, Mahishini Colonne, says it would have been more appropriate if Trudeau’s greetings had also mentioned the Sinhalese Buddhist event, as the United Kingdom has done, or if he had addressed all Sri Lankans without mentioning specific holidays, as the United States has done. Sri Lanka’s concerns “still ­remain valid and relevant,” she says.

When asked what the rationale was for seemingly ignoring both Sri Lanka and Jean, Prime Minister’s Office (PMO) spokesperson Eleanore Catenaro says Trudeau had been consistent with his festive greetings.

Trudeau, who aims for greater international engagement for Canada, has run into trouble in his overseas visits lately. His rocky Chinese trip last December failed to advance trade talks, and his recent Indian trip had been derailed by his repeated donning of ethnic clothing, criticized as over-the-top, and the invitation of a convicted attempted murderer to a Canadian reception.

Jean was then quoted anonymously in media, in on-background briefings, as suggesting that the appearance could have been a ploy to sabotage bilateral relations. Jean testified before a parliamentary committee last week, after the opposition Conservatives outed him and repeatedly demanded he be questioned.

According to Jean’s 2016 notes, the 130,000-strong Canadian Sri Lankan community is mostly Tamil and living in the Toronto area. That area is vote-rich, and in past elections, capturing it was often key to forming a majority government.

Sign up for the new Maclean’s Politics Insider newsletter here

Relations with Sri Lanka, however, face challenges, Jean wrote. The Liberal parliamentarian Gary Anandasangaree, of Tamil descent and who represents a Toronto district, had publicly accused the Sri Lankan government of inadequately addressing alleged human-rights abuses against his ethnic group during its decades-long civil war, which ended 2009, the notes read.

Then there was the matter of Trudeau’s festive statement, which was unlike those of other Western states, “who have been careful to ensure a balanced approach … despite the fact that many of those countries are home to sizeable Sri Lankan diaspora,” the notes read.

In a third briefing note, Jean cautioned that the government “must be sensitive to the interests of both Tamil and Sinhalese Canadians.” He further wrote that Tamils in Sri Lanka, unlike those in Canada, care less about political issues seeded in the past and more about “meeting immediate economic and livelihood needs.”

To “avert any further challenges” to bilateral relations, Canada should issue statements for two later significant days relevant to Sri Lankans, Jean recommended. Trudeau issued those statements, but in one of them he again singled out Tamils without mentioning Sinhalese. In the other—for Vesak Day, an occasion celebrated by Buddhists worldwide—Trudeau did not mention Sri Lanka at all.

The PMO’s Catenaro says Trudeau’s practices for Tamil New Year statements are in line with those of previous Canadian governments, although is not immediately clear what she means. When pressed for details, she says, “We cannot speak for the previous government’s processes.”

Trudeau’s Conservative predecessor, Stephen Harper, apparently had more tact. An ethnic website shows Harper did send Tamil New Year greetings to the community for at least two years of what was nearly a decade of power; but archived government webpages show he did not issue those statements to the wider public.