Justin Trudeau's long pause: Was that really the story of the day?

Politics Insider for June 3: Spending programs are ready to be scrutinized, the PM took a looooong pause at his podium and the 5G sweepstakes leave Huawei behind 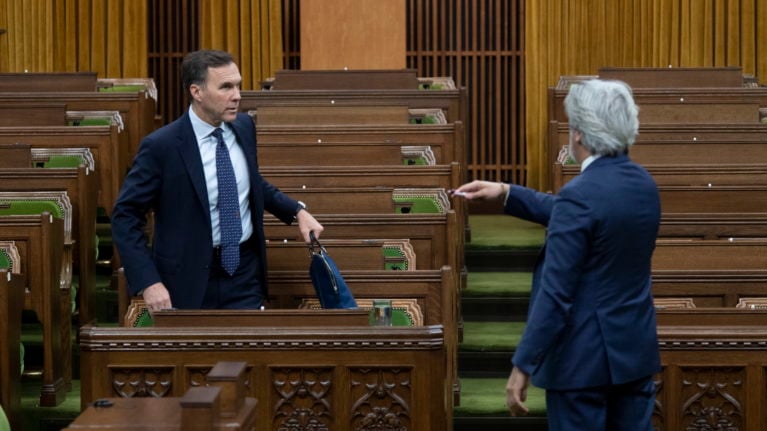 Whenever a journalist or opposition politician who pokes around pandemic spending asks a Liberal cabinet minister about accountability, the familiar refrain is that the time to evaluate government decisions will come—but just not yet. Well, receipts are adding up. The Liberals tabled their supplementary estimates in the Commons yesterday. MPs will only get four hours to debate the numbers before voting on them, but this Canadian Press summary outlines the $87 billion in spending laid out in the document, including $6 billion in new money that requires approval. (That includes $585 million for two long-delayed Navy support ships, which the feds now say will be operational between four and six years from now.)

As new spending programs rolled off the federal assembly line in record time, eschewing typical tinkering and consultations that takes months, no one was sure how they’d land. Canada Emergency Response Benefit payments, as it turns out, have blown past the initial $35 billion budget. The business wage subsidy, however, has so far failed to attract the mass buy-in from employers that the Department of Finance banked on. And the Globe and Mail reports that a rent relief program that required commercial landlords to sign up has only managed to lure in 16,000 applicants.

Eventually, Liberals will have to reckon with the data in front of them.

21 seconds: Outside Rideau Cottage, Tom Parry of CBC News asked Prime Minister Justin Trudeau to comment on Donald Trump‘s threat on Monday to unleash troops on protesters just as police unleashed tear gas on protesters to clear the way for a presidential photo-op across the street from the White House. Trudeau didn’t immediately answer, shifting his eyes down, gritting his teeth slightly, repositioning himself, then letting out a sigh. Finally, 21 seconds of silence later, the PM spoke. “We all watch with horror and consternation what’s going on in the United States.” He shortly after moved on to addressing Canada’s own problem with racism.

Body language experts could spend hours analyzing Trudeau’s response. Did he want to speak more forcefully against Trump but held back? Did he expect the question and deliberately pause for such an extended period? Or did he simply not know what to say? Watch the clip and make your best guess. (Even Trudeau’s harshest critics might have been disarmed by the PM’s prolonged struggle yesterday with, yes, a stubborn case of the hiccups.)

In the Commons, three party leaders reacted to the George Floyd protests south of the border. The CBC’s Power & Politics clipped the highlights. Justin Trudeau: “I’m not perfect, but not being perfect is not a free pass to not do the right thing.” Andrew Scheer: “We have all been affected by the heartbreaking killing of George Floyd in the United States. Racism is real, it is painful and it is wrong.” Jagmeet Singh: “People are done with pretty speeches, particularly pretty speeches from people in power that could do something about it right now if they wanted to.”

Ottawa mayor Jim Watson will take a more explicit stand vis-a-vis the George Floyd protests south of the border. Watson will join a protest at the U.S. embassy on Sussex Drive this Friday. (Four years ago, the mayor’s own track record on anti-Black racism took a severe hit.) Rawlson King, Ottawa’s first-ever Black city councillor, will soon start a new role as council’s liaison for anti-racism issues. King is also the driving force behind a new anti-racism secretariat.

Bell has taken sides in the 5G infrastructure sweepstakes. The telecom giant, which had earlier announced Finland’s Nokia as a partner, yesterday picked Ericsson, a Swedish giant, to build the company’s network in Canada. Rogers also chose Ericsson in 2018. Telus had committed to a partnership with Huawei earlier this year, but yesterday named Ericsson and Nokia as partners—and was silent on Huawei.

The feds have long waffled on whether or not they’ll ultimately allow Huawei to do that work. As long ago as Sept. 23, 2018, the Globe and Mail quoted a senior government source as saying Ottawa “has not completely ruled out” a Huawei 5G ban. Last week, the PM said his government is still working with intelligence agencies, which reportedly disagree about what to do, “to ensure what is the right path forward for Canada is followed.”

The next bulk purchase: Anita Anand, the federal minister for procurement, offered a measure of relief when she announced an order for 37 million syringes that’ll help inoculate every Canadian against COVID-19—that is, when a vaccine is available.

You’re fired: A day after the Canada Border Services Agency tweeted vaguely about its investigation of a problematic video, the agency posted a statement that a “casual employee” who worked “in a non-frontline capacity” was terminated. Case closed.