Justin Trudeau's sunny ways won in 2015. Can his brand survive?

Trudeau was the ideal candidate for dark times when he was elected. But even as he gains popularity for opposing Trump, Brand Trudeau looks vulnerable. 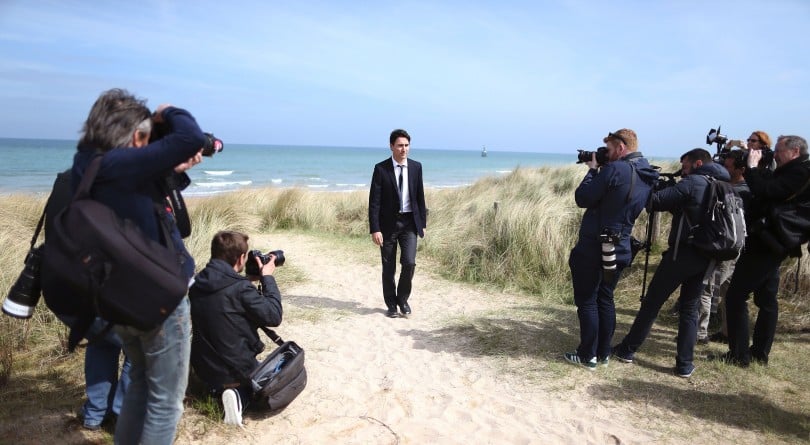 Press photographers gather as Canadian Prime Minister Justin Trudeau leaves Juno beach with his family (unseen) on April 10, 2017 in Courseulles-sur-Mer, northwestern France. Juno Beach was one of five beaches of the Allied invasion of German-occupied France in the Normandy landings on June 6, 1944 during the Second World War. (Charly Triballeau/AFP/Getty Images)

President Donald Trump had already vamoosed early from the G7 summit in early June when Prime Minister Justin Trudeau stepped in front of a “Charlevoix” backdrop emblazoned with the silhouettes of an unmistakably Canadian Shield forest.

It would be “with regret, but it would be with absolute certainty and firmness” that Canada would soon enact retaliatory tariffs, Trudeau confirmed, in response to the trade war Trump seemed determined to launch. “I have made it very clear to the president that it is not something we relish doing, but it is absolutely something we will do,” Trudeau said, with a slight shrug, in the manner of a parent simply laying out the consequences for a mid-tantrum child. “Because Canadians, we’re polite, we’re reasonable, but we also will not be pushed around.” That last line started out with a lopsided grin and the earnest tone Trudeau often adopts when making statements about the nature of the country he leads, but it ended up somewhere just shy of “Just watch me.”

Philippe Garneau, president of GWP Brand Engineering, looked at this moment as an advertising guy and thought, “This is great, the character did something!” To Garneau, the moment contained just the right amount of emotion. “It wasn’t dramatic or histrionic, it was very calm,” says Garneau, who is the brother of Trudeau’s minister of transport, Marc Garneau. “If I was part of his team, I would say, ‘How do we get him to do more of that?’ ”

Trudeau and his Liberal party swept to power in 2015 during a political moment that was perfect for the sunny ways they touted and the savvy way they used social media and political branding to broadcast those ways, and the youthful, telegenic leader who embodied them. Voters had tired of the dour, workmanlike character of Harper’s Conservative government. Life at large seemed buoyant, and the self-conscious optimism and progressiveness of Trudeau & Co. were perfectly poised to catch the updraft. For months, there was a frisson of novelty around everything they did—even if you were inclined to wonder if all those photobombs were strictly necessary.

READ MORE: The marketing of Justin Trudeau (from 2016)

Two years ago, when the government was still young, Maclean’s examined how Trudeau’s team was advertising him to voters, and now we’re taking a fresh look at that branding project in a very different moment. The present state of world affairs brings to mind gathering storm clouds more than bright skies; Trudeau and his government have accumulated several missteps and unpopular decisions; and a re-election bid is an awkward fit for a government that marketed itself as cheerful upstarts last time around. The 2019 federal election is near enough that it feels like the chess pieces are beginning to align on the board, and this time, it’s a much tougher set-up.

The first thing Mireille Lalancette, a professor in political communication at the Université du Québec à Trois-Rivières, likes to point out about Trudeau’s Instagram feed is that there was nary a selfie to be had—the “selfie PM” label was more image than reality. Lalancette, together with Vincent Raynauld of Emerson College in Boston, undertook a systematic study of the photo stream from the year following the 2015 election, finding “an image of multiculturalism, open-mindedness, youth, a politician that can be there for people,” with feminist values imbuing it all. Trudeau’s team is projecting that same image now, she says, but the context has changed entirely. “They are keeping the core brand—Justin Trudeau’s personal brand—but now they are in power,” she says. “And as we saw with [Barack] Obama, it’s harder when you’re in power to keep the projection of people as it was, so fresh and new.”

RELATED: Ottawa’s reigning political selfie junkie is not who you think

The other obvious parallel, says Alex Marland, a professor of political science at Memorial University and author of Brand Command: Canadian Politics and Democracy in the Age of Message Control, is the original Trudeaumania, and the trajectory that followed. “[It’s] the same sort of sense of optimism, freshness, newness, getting rid of the past, putting Canada in a different light and becoming cool and hip on an international stage,” he says. “There are a lot of similarities between 2015 and 1968—they’re not perfect, but there are a lot—but the other similarity is that Pierre Trudeau’s popularity started to wane.”

Many of the public-facing duties of the prime minister are pretty rote, Marland points out, so whether it’s Stephen Harper or Trudeau in the suit, the imagery acquires a been-there-done-that sameness after a while—and so do the personal branding quirks that seemed novel at first. “The frame changes. Probably the biggest challenge is it becomes hard to generate a new approach that becomes kind of fresh, that people see as newsworthy,” he says. “Instead, it becomes more cynical and you say, ‘Well, this is obviously stage-managed, this is about publicity,’ whereas before it was seen as democratic.”

Polls show the current government enjoyed a honeymoon for about a year following the 2015 election, then things started to drop off as debris accumulated. Trudeau’s 2016 family vacation to the Aga Khan’s private island violated conflict of interest laws, and his government’s small-business tax reforms enraged entrepreneurs, farmers and doctors. Trudeau ditched another promise to undertake electoral reform, and on a trip to India, his penchant for dressing the part was met with derision rather than enthusiasm. Then, 18-year-old groping allegations against Trudeau resurfaced, raising charges of hypocrisy for both his vaunted feminism and his zero-tolerance approach with caucus members.

RELATED: The Trudeau Report Card: A look at the bumpy road ahead

There’s a notion now that brands are not “taught”—that is, you don’t get to shape what people think of you with ads and deliberate moves alone—but rather “observed,” says Garneau, and that means every move counts, whether you want it to or not. Two years ago, when Maclean’s examined Trudeau’s brand, Garneau said the greatest risk to his reputation “would be for them to say, ‘He’s just another politician.’ ” There’s no doubt Trudeau has run headlong into that trap a few times in office, Garneau says now, but he also detects something else at work. “What we were seeing there is the brand was getting a little too hip,” Garneau says. “That happens sometimes too—your brand comes out and everybody is talking about it, and then the tall-poppy syndrome kicks in and you want to kick it down a little bit.”

But brands—and politicians—exist in an ecosystem, not a vacuum, and the undrained swamp into which Trudeau and other world leaders have been tossed has been a strange gift, in Garneau’s estimation. The most prominent critique of Trudeau in the early going was a lack of experience and perceived shortage of gravitas, but then along came one Donald J. Trump. “It’s as if you launched a brand and then the competition committed suicide on you,” Garneau says. “Like, what a gift. He suddenly looked more statesmanlike and responsible by opposition.”

Brands are often defined by conflict, and Trudeau’s response at the G7 summit press conference was, for Garneau, a stand-on-guard-for-thee moment that carried a cinematic whiff of Gandalf thundering “You shall not pass” in The Lord of the Rings. “That was branding gold,” Garneau says. Indeed, Trudeau’s popularity got a polling bump immediately after, and a recent Nanos Research survey showed 71 per cent of Canadians approve of how he’s handled the trade fisticuffs.

READ MORE: Donald Trump’s rambling explanation of what happened at the G7 with Justin Trudeau

Trudeau’s youth and athleticism also stands in stark visual contrast to the overweight, septuagenarian Trump, implying a different power imbalance of the sort that seems likely to enrage Trump on a deep, personal level—even if the occasional prime ministerial shirtless jog might seem like gilding the lily, if you’re inclined to be cynical about such things.

But there may come a point when the chaos wrought by Trump boxes Trudeau in on how he can portray himself, says Andrew MacDougall, former director of communications for Harper and a regular Maclean’s contributor. The Liberals have been remarkably consistent in playing to Trudeau’s “Mr. Positivity” strengths, and they still want to be “that beacon of positivity in the world that’s gone pretty dark,” MacDougall says. But that’s inherently a political brand suited to fair weather, and if things get darker, the Conservatives could be well placed to offer themselves as the serious party for serious times. “It sets up an interesting dynamic if he’s still being the buzzy global star when Canadians have much more proximate concerns if things go south economically,” MacDougall says. “If NAFTA goes, and it’s bad, then maybe they’ll have to change that up.”

The best analogy Garneau can conjure up between a human politician and a consumer product is a car: you don’t buy a new one often, and it’s a big investment, so you mull over your choice thoroughly, then you get excited thinking about what your life will be like with it. “As Canadians, looking at his brand, if you voted for him, you were invested in the idea that you wanted him to succeed,” Garneau says. “So you bring something to a brand that doesn’t often happen in private enterprise, which is goodwill.”

Then, after a few years, when you start thinking it’s time to upgrade, you look around at what else is out there. Because you put a bunch of money into the first choice and you want to believe you made a good decision, chances are you’ll stay with the same make and maybe just flirt with a new model. But consumers also like to know they’re getting something fresh, Garneau says, which is why you see all those car ads touting “the totally redesigned” whatever-it-is.

And so Canadian voters can probably expect to see a familiar and consistent, but, yes, totally redesigned Justin Trudeau trotted out between now and that not-so-distant 2019 election day.