The Liberal newcomer didn't have the name recognition of the NDP leader, but she was a formidable opponent in B.C.'s Burnaby South—until she stepped down 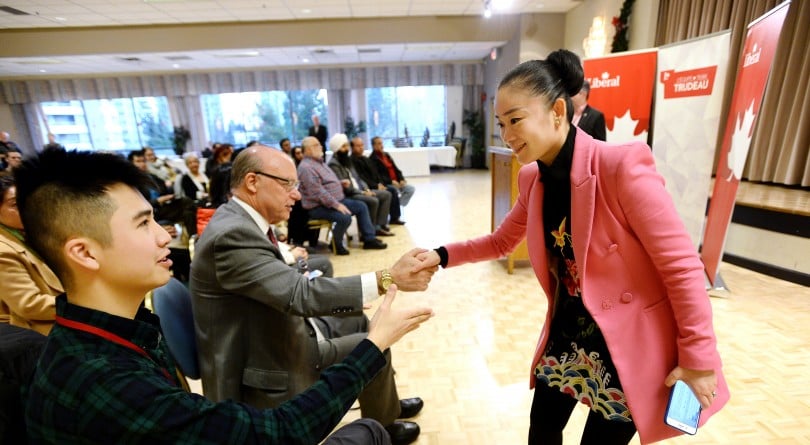 UPDATE: On Jan. 16, Karen Wang stepped down as the Liberal candidate in Burnaby South’s byelection after making inappropriate remarks on social media. Now, cynics will surely observe, Jagmeet Singh is back to being his own worst enemy.

Karen Wang is a relative unknown in politics. She’s never held office at any level. She’s no local celebrity. And the only time her name was on a ballot was last year in her failed run for the provincial legislature with the B.C. Liberals.

Jagmeet Singh, on the other hand, was a standout MPP for the Ontario NDP. His popularity spurred him to win the federal NDP leadership on the first ballot. And his aspirations are to become prime minister.

Based on their political CVs, it would appear a political mismatch in a head-to-head race. And yet, as the two prepare to face off in an upcoming federal by-election in B.C.’s Burnaby South riding, “this is no slam dunk [for Singh],” says former NDP press secretary Farouk Karim.

Singh has failed to gain traction nationally for his party without a seat of his own in the House of Commons, which might explain him running for a seat located four provinces away from the last place he was elected, Brampton, Ont.

In the last federal election, the NDP won the riding by fewer than 500 votes over the Liberals. After NDP MP Kennedy Stewart vacated the seat last summer in his successful run for Vancouver mayor, a Mainstreet Research survey found the NDP had fallen to third place in Burnaby South, polling at 27 per cent—compared to 36 per cent for the Liberals. Granted, the poll was done without any candidate’s names, just the party names.

All of which to say, as Singh talks of leading the NDP into the 2019 federal election, his first true test will be defeating Wang, a daycare operator from Burnaby, on her home turf.

Wang was born in 1975, growing up in a village near Shiyan, China. Her mother was a farmer who never went to school, while her father only studied until high school. “During the 1960s, my father’s family was punished during the cultural revolution because my [paternal] grandmother was a women’s leader in the town,” Wang says. Both her parents prioritized education for Wang, in addition to learning Chinese opera, a family passion for generations.

While studying at a foreign language university in China, Wang worked weekends at the provincial history museum as an English tour guide. After getting married at 21, she moved to Beijing with her husband who found work in the capital.

“I had no contacts in Beijing,” Wang remembers. “[My husband] gave me a newspaper and there was a company looking for English teachers for children. That’s how I got into early childhood education. I started to teach in elementary schools and daycares.” Soon after, her husband mentioned an opportunity for them move to Canada under a work program. The entire immigration process took less than a year.

The couple arrived to B.C. in 1999, where Wang was once again in a new city and looking for work. She heard early childhood educators were in great demand, so she enrolled at Burnaby College. After giving birth to two children—with two trips back to school after each maternity leave—Wang opened her own child care centre in 2009, Angels Playhouse, named after her daughter.

While she doesn’t have the national fame that Singh does, she says she has a leg up locally, having knocked on more than 7,500 doors in the provincial election for the B.C. Liberals. She finished second place behind the NDP candidate and three-term Burnaby city councillor, Anne Kang.

Now, as a federal candidate, she says her campaign priorities will be job creation, support for small business and investment in affordable housing. Her strategy, it would appear, is also to attach herself to Justin Trudeau, not the Liberals.

In Wang’s Twitter bio she calls herself the “#TeamTrudeau candidate for Burnaby South”—not the Liberal candidate. With the Liberals’ best showing in decades in B.C. for the 2015 election—thanks in large part to Trudeau’s popularity—Wang was also introduced by the Liberals as part of “Team Trudeau.”

“We didn’t see a lot of Team Ignatieff or Team Dion descriptions here in B.C.,” says Mario Canseco, president of the Vancouver-based polling firm Research Co. “I think they’re trying to distance themselves from the B.C. Liberals who lost the last [provincial] election, so it’s easier to say Team Trudeau. There’s no confusion with the brand. This is the candidate who’s running for the prime minister.”

In Wang, the Liberals have “somebody who’s a small business owner, which appeals to the Conservative mindset of the Liberal Party,” adds Canseco. “She’s a woman, a Chinese-Canadian, and spends a lot of time in daycares, which is a huge issue in urban B.C. where the waiting lists are huge.”

When Singh announced his plans to run in Burnaby South, there was talk in Ottawa about the Liberals extending the “leader’s courtesy,” as the concept is known, in which rival parties let newly elected party leaders run unopposed in by-elections to join the House of Commons. The Liberals have since been criticized for not affording Singh this opportunity.

And while the tradition is longstanding, it is most commonly used for leaders of the official opposition and not third party leaders. Meanwhile, the last time a new leader of the official opposition ran in a by-election, in 2002, the NDP ran a candidate against then-Canadian Alliance leader Stephen Harper in his Calgary riding. (The Liberals of the day did not run a candidate.)

Not only are the Liberals running against Singh in Burnaby, but they waited months until officially calling this by-election, preventing Singh from potentially joining Parliament last year.

“I think it was a bit of pettiness to wait until the deadline to launch the by-election,” says Karim, the NDP insider. “Usually, with a new party leader, the courtesy is not only not running somebody [against them in a by-election] but it should be to launch the by-election as soon as you can. This seat was vacated in [September]. The election could have happened anytime in the fall. Surely it was for a political reason.”*

Singh will have the advantage of the Green Party of Canada not running a candidate in Burnaby South—as part of the leader’s courtesy—a decision that could offer Singh a vital boost. “Not having the Greens present a candidate, the anti-pipeline vote will coalesce around the NDP,” Karim says.

As the months went by to end 2018, the stream of positive news coverage for Singh faded. Canadians were no longer talking about Singh as the hip new NDP leader, his fashion sense, or his skill at recruiting new members. With the honeymoon period long over, Canseco adds, Singh’s by-election campaign will prove all the more difficult.

“It’s essentially trying to establish yourself as a national leader by running in a place where you’re not that well known,” Canseco says. “It’s a tough undertaking. It’s not easy like he’s running in a friendly riding.”

And if Wang proves victorious, Karim adds, “It would be a rough spring for the NDP.”

CORRECTION, Jan. 7, 2019: A quote in this story previously claimed Kennedy Stewart resigned his seat in the House of Commons in August 2018. In fact, he resigned the seat in September.