The Liberals' defence policy: So much, and too little

Chrystia Freeland set out a bold vision for Canada's foreign policy. But the Liberals' defence policy seems to offer few ways to meet it. 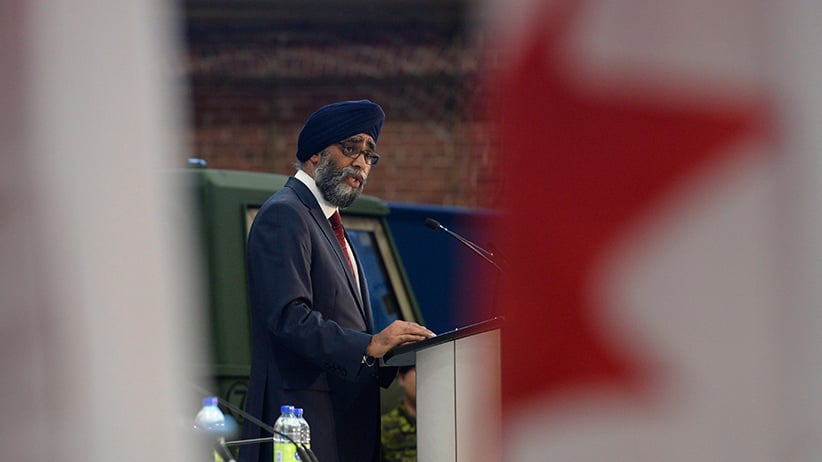 Wednesday’s joint announcement on defence policy by ministers Harjit Sajjan and Marc Garneau covered a lot of ground. A sweeping new vision of what the Canadian Armed Forces will be able to do was accompanied by a 70 per cent increase in the defence budget over the next decade. It logically followed a foreign policy statement yesterday by Minister Chrystia Freeland, which had many surprises in it. As a result, new military ventures into the areas of space-based sensing and communications, cyber security and self-guided vehicles will be keys to the future for the military.

PAUL WELLS: Chrystia Freeland explains the world for you

While the increase in the budget—from $18.9 billion today to $32.7 billion in the 2026-27 fiscal year—is significant, the number of new programs, increases in personnel numbers and ambitious equipment procurement will severely test the ministers’ claim that their policy is “fully funded.” By adding 3,500 people to the regular force and 1,500 to the reserve force, and not reducing the massive defence portfolio of bases and lands, the budget will be almost certainly be confronted by challenges.

Will the money go as far as it’s forecast? Frankly, it is hard to be optimistic.

Among the most urgently needed of the proposed changes is a comprehensive approach to health and wellness while in uniform, plus ongoing support during the transition back to civilian life. The number of bad news stories about gaps between salary stops and pension starts, provincial health service shortfalls and lack of capacity in local medical practices for former service members has clearly stung the government into action. It was long overdue. Because of the complexity of this wide-ranging issue, it may be the most challenging of all the changes announced today.

Probably the most immediately impactful component of the new policy is a commitment that the cost of deployed operations will no longer come from in-year funds. This will provide immediate and significant relief for military budget managers that had been plagued with making difficult choices over cuts to a myriad of training, maintenance and supply items to pay for “the primacy of operations.”

The change agenda for the military to become an agile organization capable of engaging in a wide range of activities in this unpredictable world was contrasted by obvious loyalty to legacy capabilities. Warships, fighters and armoured vehicles will all be procured in large numbers, and at a huge cost. While the announcement made no comment on Cold War force structure, the commitment to preserve the tactical capacities so prized from that era was made abundantly clear.

Neither was there any explanation about how the Canadian military will become a leader in global affairs. Long a supporter of alliances and coalitions, Canada’s military contributions have always been designed as bolt-on additions to first British and then American force structures; our allies’ military and informational power enabled the entire activity, and Canada went along as required. The defence policy features no mention of the significant logistical upgrading that would be required so that Canada could be self-reliant and self-sufficient at the end of long supply lines. Canada’s experiences in Afghanistan showed the cost and difficulty of undertaking tasks in a remote location; minor logistical improvements resulted, but only enough to get by. To lead in global affairs would require a vastly expanded logistical capacity to enable and sustain operations. The adage that “amateurs study tactics, professionals study logistics” is especially appropriate in this regard.

And the policy doesn’t seem to account for potential events. If strategic changes force Canada to undertake military operations in the far western Pacific or in the high Arctic, the entire logistical orientation of the armed forces will be taken and shifted either 90 degrees (to the North) or 180 degrees (to the West). Both theatres of operation would be maritime in nature without established support bases for our use. Apart from a mention of more space-based surveillance and satellites for communication in high latitudes, there was no detail on how a major operation would be supported. Clearly, while the future is viewed as unpredictable, some outcomes are too difficult to even contemplate.

Glaringly absent from the announcement, too, was any linkage between Canadian defence policy and industrial policy. To be truly capable of leading, Canada will have to become self-sufficient industrially, militarily and intellectually. Without a national industrial base and supply chain, Canada and its military will remain dependent of foreign suppliers and their production schedules. Our officers must diligently plan and rigorously practice the role of leading operations, which have come to us only infrequently. Our intelligence services will have to be significantly expanded and the professional education system radically reformed to change the organizational culture of the military. Currently, external limitations dictate our strategic options and freedom of action. Moreover, our own self-image as contributors shapes the type of tactical actions we are capable of performing.

MORE: The sinking of the Canadian Navy

During my testimony before the defence review committee in October, I urged a three-phase plan to enable our current military structure before contemplating expansion. First, we must replenish shortfalls in supplies, spare parts and ammunition. Our military is too small to have even a single unit inactive due to shortages of simple things. Second, we need to right-size the infrastructure so that the military can shift its entire force structure from an east-facing orientation to any other direction. Neither the Atlantic or Pacific bases could support the entire naval fleet, robbing it of the inherent advantage of sea power: mobility. Third, we need to get the force structure right. Look at future trends and then decide where to put the organizational emphasis. Be sure that funding distribution is adequate for the change. At a minimum, 27 per cent to 29 per cent of the budget needs to go to capital procurement if major change is envisioned—a full 10 per cent increase over current levels. These adjustments are necessary before attempting generational change, and it is not clear to me that the new budget meets this test.

A new threat, a change of government or an economic recession could undo all of this, as it has done many times in the past. The last plan to significantly reform the Canadian military promised advanced combat aircraft, a marine regiment and three armed polar-class icebreakers. None of it came to pass and the same could easily happen again. It is easy to be skeptical of the new Liberal defence policy, but it is also too early to say that it will never work. But what is certain is that hard choices lie ahead between the past and the future—and the promised budget increase is not enough to pay for plans that adhere to both.