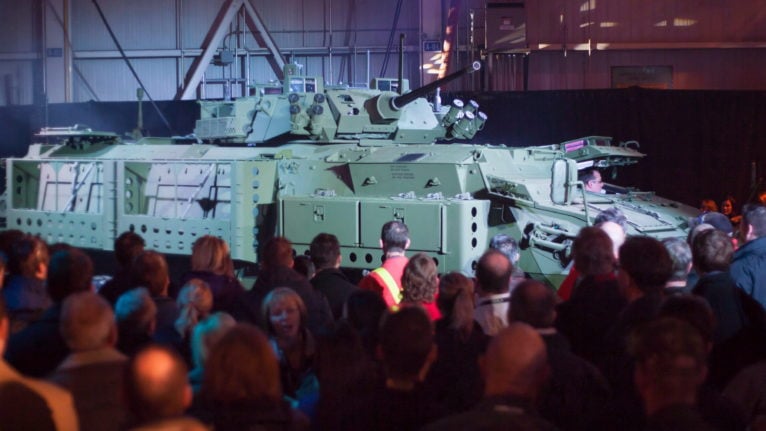 The 2012 unveiling of a Light Armoured Vehicle (LAV) at a General Dynamics facility in London, Ont. An auditor general's report found no consideration of human rights risks on the part of the federal agency that brokered the deal to sell LAVs to Saudi Arabia (Mark Spowart/CP)

As Ottawa bakes and journalists huddle for a long-awaited federal budgetary update, the country’s auditor general has published a buffet of recommendations on how the government can shape up.

It is 2020. The first six months of the year felt like approximately a decade. So it is only natural for the AG’s “spring reports” to land during a summer heat wave. It will not be surprising if the “fall reports” land on Christmas Eve. Nothing about the “timing,” in fact, will cause any surprise—for what is time?

There are surprises, as always, in the independent audits of Canadian government departments, agencies and Crown corporations.

In Wednesday’s batch, next to an egregious indictment of Canada’s deportation system, are polite suggestions for reforming the student loans process, fixing supply chains in the Canadian military and getting conservationists at the National Gallery of Canada to write stuff down.

… are still on Canadian soil despite being ordered to leave, and the Canada Border Services Agency has mismanaged their removal in several ways, the office of the AG found.

The “removal program,” which cost $34 million in 2018-19, has failed to identify the whereabouts of some 34,600 people who are not allowed to be in the country and have exhausted all legal recourse to argue the contrary. In many cases, no investigation is pursued to figure out where they are.

Some cases are delayed just because they have not been assigned to officers in the agency. Some cases belong in one pile but end up in another. A reliance on literal paper trails means sometimes electronic information is not as up-to-date as a file folder. The AG found thousands of inactive cases with “no explanation.”

On average, people who failed to claim asylum status spend four years having their cases processed before they are ordered to leave, or 10 years if the department can’t find them. (Such deportees are protected from being sent back to countries considered dangerous.) Criminal foreign nationals, who the department insists are a “low risk to public safety,” spend five years and 11 years in the same systems, respectively.

Despite an increase in removals, the number of people in the backlog continues to rise, too.

… of student loan borrowers enrolled in the Repayment Assistance Plan weren’t making any repayments at all, as of July 2018. The combined value of the loans, at $2.9 billion, leads the AG to remark: “This is a lot of money at risk of non-repayment.”

The Canada Student Loans program had previously identified integrity problems around enrolment in the repayment program, including that some students weren’t reporting their financial status accurately, and that some of them were ineligible in the first place. Employment and Social Development Canada, in a response to the AG, clarified that only now are they finalizing an information-sharing agreement with the Canada Revenue Agency that can help verify the former students’ claims.

Auditors found, in the department’s own survey, that most borrowers didn’t understand their own loans very well.

They also cast an eye on a service provider whose contract to administer the whole loan portfolio began in 2006, who is locked in until 2027 and who could be extended to 2034. Incentives to the tune of $68 million in the $900-million, 12-year contract were paid out to the contractor for improvements that would have happened anyway due to predetermined, automatic processes. “In our view,” the report says, “it is important that any incentives paid to a service provider be tied to significant performance improvements.”

… for equipment and supplies within the Canadian Armed Forces have lapsed for more than a year. In a log of a million materiel requests—for things such as spare parts, uniforms and rations—the AG found half were received after the requested date (and a quarter of those were more than 40 days late).

The AG found problems up and down National Defence’s supply chain, including with stock management and an unnecessary reliance on commercial transportation. A lot of the “high-priority” requests also weren’t justified as such, gumming up the system.

We found here the closest thing to a hockey metaphor (and it was a stretch) in this year’s spring reports: the audit indicated National Defence “did not adequately forecast its needs for materiel to be able to position it close to where it would be needed.” In other words, they did not skate to where the puck was going. Ouch.

… were not identified through any formal process by the Canada Commercial Corporation, which helps Canadian exporters get their products to international markets. The CCC helped broker Canada’s famous $15-billion deal, in 2014, to sell light armoured vehicles to Saudi Arabia.

The deal has brought endless controversy to the Canadian government because of the Saudi propensity to use such vehicles to perpetrate abuses against groups it doesn’t like.

But the AG report, concluded in spring 2019 but released alongside other reports on Wednesday, confirmed that years later, the Crown corp still didn’t have a policy about how to mitigate potential human rights risks in its dealings.

At the time of the report, the CCC said it was implementing “due diligence processes” to address the issue. The AG otherwise found “reasonable assurance” that there were no major deficiencies to its practices.

… are happening, and they are happening in good ways, thanks to highly skilled experts, the National Gallery of Canada asserts in response to an audit of its work. But they just don’t seem to write things down, so a “detailed action plan” will come into force to ensure just that.

The AG’s report on the gallery had found a “significant deficiency” in the gallery’s ability to fulfill its own policies, which require “strategic priorities for the conservation program and technical research” to be established. But there was no documentation or articulation of those priorities. That made it hard for auditors to figure out whether they were being met.

It was also unclear whether work was “properly prioritized,” whether it was done on time and whether it was meeting corporate expectations. A technical data bank was mandated but had not been developed. Paper files were used instead.

All of this despite similar AG recommendations in 2009. Artists, man.

Standards at the Standards Council ..

… are not always standardized to standard. Let us rephrase. While the Crown corp had good management practices overall, there were weaknesses in oversight that could lead to corporate risks and a failure to identify conflicts of interest among members of its governing council.

The responses to the recommendations were, of course, standard fare.