Spot the debate among the one-liners 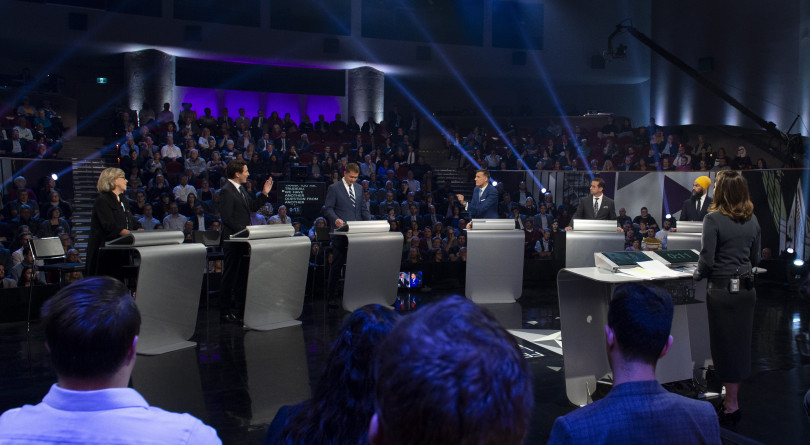 For a lot of Canadians, Monday night’s debate was the only opportunity they’ll have to see Prime Minister Justin Trudeau square off against his rivals as he tries to keep his job. And it’s tempting to conclude viewers came away from the spectacle, which was the only English-language debate sanctioned by the Trudeau government’s debate commission, little more informed than they were going in.

Still, despite what turned out to be a wall of rehearsed one-liners and cross-talking, a picture emerged of where the leaders stand (or don’t stand, in some cases) on several key issues in the campaign, from climate change to immigration to Quebec’s Bill 21. Read on for Maclean’s full analysis of the night.

It’s only wafer thin: It helps to think of the debate format on Monday night in terms of electoral indigestion, writes Stephen Maher:

Watching the 2019 leaders’ debate was like filling your plate at a buffet with too many different kinds of dishes on offer.

You take a little of the vindaloo, a slice of ham, a little chana masala, some tuna salad, some smoked salmon, a piece of tourtiere, a few eggrolls, and end up with a plate filled with a bit of this and a bit of that, each item appealing in its way, but when you finish, you haven’t had enough of anything to be sure what to think of it.

For two hours, in the only English language debate that Justin Trudeau agreed to show up for in this election, with millions of Canadians watching, the six leaders spewed out talking points, talked over one another, delivered canned lines and did their best to win over the poor, confused people watching from home. (Read more)

Tick tock: With 11 people in total on stage, between the candidates and moderators, and just two hours of debate time, it came down to which candidates could best distill their message into pithy quips. That wasn’t the guy up for re-election, writes Paul Wells:

Justin Trudeau in particular seemed to struggle to push out everything he wanted to say in the time he said it. He’s been doing town hall tours at regular intervals since 2015, which is both laudable democracy and, I used to think, great practice for the debates that would inevitably follow. But in a town hall you can drone on and on, and on Monday Trudeau couldn’t. It cramped his style. If only he’d taken a chance to show up for an earlier, way less crowded debate with a simpler format. You had to know that was coming.

And much more than in last week’s French-language non-league-sanctioned TVA Face à Face debate, Trudeau was unable to skate rings around most of the other leaders, just because more of them speak English and, one suspects, Andrew Scheer had finally done some serious preparation.

“There is a vacancy for the leadership of the Ontario Liberal Party,” Scheer told Trudeau when the Liberal leader came after him for the evening’s fourth or fifth time with Ontario premier Doug Ford’s record, “and if you’re so obsessed with provincial politics, go and run for that.” (Read more)

Standing firm: At several points throughout the debate Scheer found himself under attack for his position on First Nations and pipeline approvals, though as John Geddes writes, the Conservative leader held fast to his view that “there are dozens of Indigenous communities who want these projects to go ahead because they know that is the key to prosperity.”:

When Scheer was answering questions from reporters after the debate, the issue came up again. He stressed that whatever system is put in place to give Indigenous peoples a fair way to be consulted must ultimately allow “big projects to get done.” “It will not happen if any one First Nation can can veto projects,” he said. “That is something that First Nations leaders and grassroots organizations are concerned about as well.” (Read more)

A wobbly stand: The unofficial theme of Election 2019 has been Quebec’s Bill 21, which bans provincial public sector workers from wearing religious symbols. The legislation has come up repeatedly throughout the campaign, and leaders of all stripes, including Trudeau and NDP leader Jagmeet Singh (who would be barred from working for the government in Quebec because of his Sikh turban) have refused to commit to challenging the legislation in court. Which made Trudeau’s weaselly words on the matter during the debate almost seem strong in comparison, writes Jason Markusoff:

“It’s a question of yes, it’s awkward politically, because as Mr. Blanchet says it is very popular,” the Liberal leader began. “But I am the only one on the stage who has said yes,” he paused on yes, to build up his grand crescendo… “a federal government might have to intervene on this.” Might? That’s his big zinger to defend minority and women’s rights?

Trudeau loaded up again for what seemed like another attempted sock-o against the NDP leader: “So why not act on your convictions and leave the door open to challenging it.” One of those old-timey revolvers in cartoons that actually produced a daffodil, not anything harmful. (Read more)

Match up: When Trudeau and Scheer actually got a chance to face off against each other in the debate there wasn’t anything particularly new or illuminating about what they were saying, writes Shannon Proudfoot. That didn’t matter:

In a campaign that has seemed to consist of little more than paint-by-numbers outrage and petty little treats tossed at the electorate, there was something weirdly bracing about watching these two chief adversaries just stand there flinging indictments directly into each other’s faces.

Almost certainly, no voters were left in a better decision-making position, but there was a bit of catharsis in it. (Read more)

Lastly, check out these seven key moments from the debate, one for each leader and then one in which every leader had something to say (Maclean’s)

Correction: Before you go, a correction to Monday’s Politics Insider. It said a 338 Canada vote projection gave Bernier’s People’s Party a 0.6 per cent chance of winning a single seat. That was wrong. It should have said the PPC is projected to win 0.7 seats. Sorry for the error.