Maclean's editorial: Now it's time for you to choose

At the end of this very long campaign, the field has narrowed to two well-defined and credible main contenders 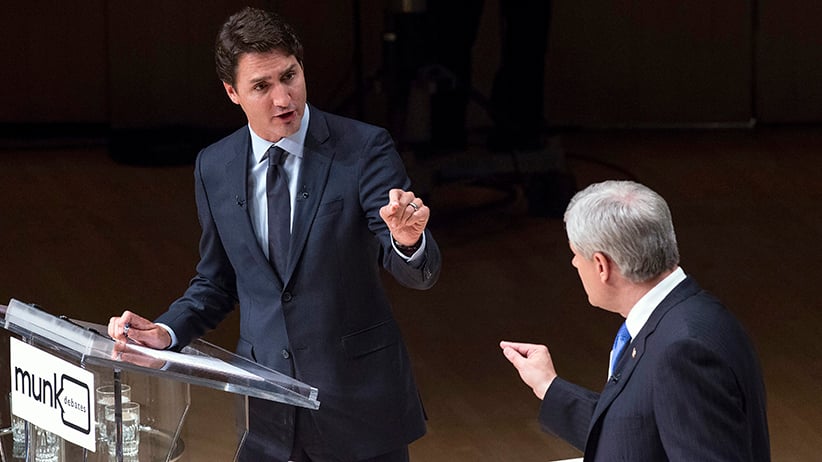 The longest election campaign in Canada’s modern era is finally drawing to a close. What began as a fascinating contest between three leaders in a tightly packed ﬁeld has become, in the ﬁnal week, a race between two distinct and well-matched contenders.

The lengthy campaign has done no favours to NDP Leader Tom Mulcair, who started as front-runner. The party’s plan to transform Mulcair from ﬁery opposition politician into soothing grandfather-like ﬁgure has not connected with voters. Neither has a platform that claims it’s possible to balance the budget while simultaneously adding big-ticket items such as universal child care and a national drug plan. Lovable grandpa or not, he can’t do it all. Mulcair’s credibility gap worsens when the topic turns to foreign policy. Vows to abandon the ﬁght against Islamic State and to drop out of the Trans-Paciﬁc Partnership (TPP) travel over familiar NDP territory, but it’s hardly winning ground. It is impossible to contemplate Canada excusing itself from a trade pact that includes NAFTA partners Mexico and the United States; we’d be triangulated into economic obscurity.

For all these reasons, next week’s race will likely return to that classic Canadian electoral confrontation of Liberal versus Conservative: golden boy against cagey veteran.

As challenger, Liberal Leader Justin Trudeau has the advantage of a fresh face, a likeable personality and a legitimate claim to the “change” banner. It is an appealing package. Even those ubiquitous Conservative attack ads—“I’m not saying no forever, but not now”—seem to acknowledge a certain inevitability about his future.

Trudeau has bolstered his political charisma with a competent array of potential cabinet ministers and policy proposals. Of particular note is his plan to shift social policy toward greater income-testing. Targeting tax breaks and child benefit cheques to those most in need is an efficient and effective method of allocating scarce government funds. His vow to cancel income splitting, roll back Tax-Free Savings Accounts and raise the tax rate on high-income earners will embitter some Canadians, but it represents a coherent economic platform that plays up important differences between Trudeau’s vision and that of the incumbent government. He adds to his credibility with necessary support for free trade and Canada’s resource industries. A plan to run modest deficits from now until 2019 should have little impact—good or bad—on Canada’s economic health. 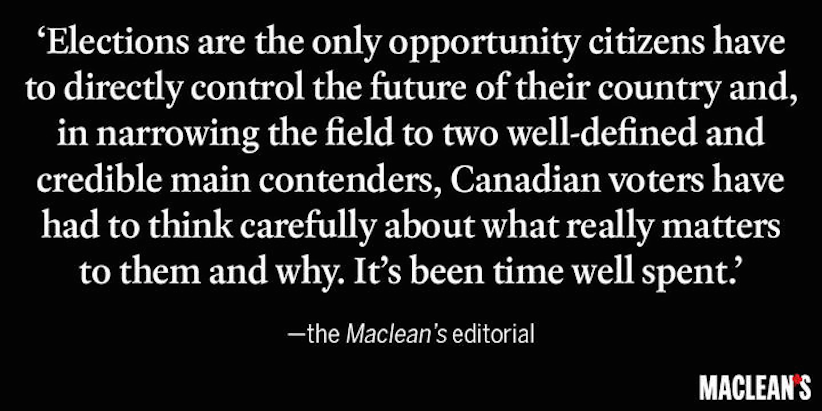 Yet Trudeau undercuts his own appeal with occasional detours into pandering. The most obvious example is his promise to cancel recent reforms of Employment Insurance. These reforms, including a requirement that EI claimants accept jobs up to an hour’s commute from home, are meant to improve employment in Atlantic Canada and reduce seasonal dependency on EI. Trudeau will undo this to win the favour of a small subset of East Coast voters. His knee-jerk vow to accept each and every recommendation from the federal Truth and Reconciliation Commission (including a nonsensical demand to increase CBC funding) seems a worrisome sign that he’s too eager to please. Finally, his promise of umpteen reviews—covering everything from door-to-door mail delivery to electoral reform and the creation of a federal chief science officer—carries the whiff of former Liberal prime minister Paul Martin and his impossibly long list of priorities.

In sharp contrast to Trudeau’s youthful energy and enthusiasm is the staid and deliberately modest platform of Stephen Harper. As the incumbent, Harper has the advantage of being able to point to his track record. And, by and large, it’s to his credit. Harper has never promised Canadians any grand vision of government beyond low taxes, restrained spending and balanced budgets—all of which he’s achieved. He has also been very effective at establishing a more forceful and meaningful Canadian presence in world affairs. The recent TPP deal adds to this positive glow. In the areas that matter most, Harper has consistently delivered.

Against this commendable consistency, however, must be set Harper’s nagging tendency to invent crises where none exist, particularly in the areas of crime, religious accommodation and statistical record-keeping. There’s no excuse for the rapid erosion of Statistics Canada’s efficacy, or the conjured-from-nowhere debate about wearing niqabs during citizenship ceremonies. A Canadian election campaign should be above this sort of culture-war-mongering. The final measure of Harper thus rests on whether his large-scale accomplishments outweigh the many smaller-scale frustrations he has created.

The outsized length of the 2015 campaign has been a frequent source of complaint from many corners. Yet elections are the only opportunity citizens have to directly control the future of their country and, in narrowing the field to two well-defined and credible main contenders, Canadian voters have had to think carefully about what really matters to them and why. It’s been time well spent.