The NDP leader on NAFTA, deficits, jobs and more 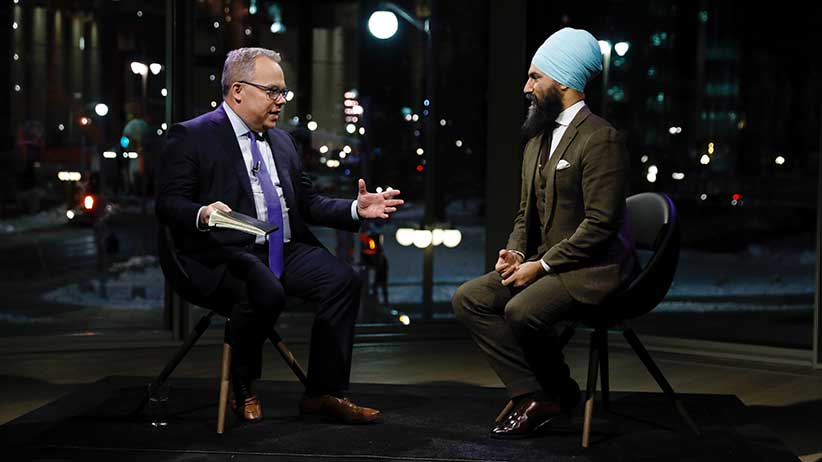 Here are six key things Singh said about the economy, jobs and industry during their conversation.

In 2015, Tom Mulcair promised to balance the budget. That pledge, contrasted with the Liberals’ willingness to run deficits, has been cited as a key factor in the NDP’s fall from campaign frontrunner to third place. Singh will not necessarily emulate that promise. “I think it’s maybe no longer a big issue, people haven’t been talking about it a lot,” he noted. Singh said he’s “opposed to austerity in all its forms,” and in “difficult economic times,” he believes in “deficit funding to ensure that we continue with our social programs that we need.”

“We’re a trading nation,” Singh acknowledged. “We need to have trade, we rely on it, a vast proportion of our jobs in our country rely on trade agreements.” But he favours “fair” trade over the simply “free” variety. Portions of NAFTA don’t meet that standard, he said. “If we have an agreement with a country like Mexico, that doesn’t support or protect the rights of workers, that doesn’t have the same environmental regulations, how can Canadians ever compete with that jurisdiction?” he asked. He also pointed to the investor-state dispute resolution mechanisms in Chapter 11.

In 2015, NDP candidate Linda McQuaig suggested that some of the fossil fuels in Canada’s oilsands “may have to stay in the grounds.” Singh said “many jobs rely on these sectors,” but suggested there’s a global trend towards sustainability. “We can’t actually tackle issues of the environment without making sure that people have jobs,” he said. “How can we transition people into jobs that are not jobs of the next five years, but are jobs of the next 50 years?” Doing that will mean focusing on sustainable sectors rather than finite resources. If he becomes prime minister, Singh said, energy projects would need to help meet the country’s climate change goals and create local and sustainable jobs.

On taxing the rich

Singh has repeatedly pointed to the Panama and Paradise Papers investigations as proof of “massive wealth that’s being siphoned out of our country.” That money could be used for programs like pharmacare or free tuition he said. His proposed fixes are a tax on CEO stock options and expansion of the capital gains levy. Why would the rich stay or invest here under those conditions? “We have a stable government, we have a great universal healthcare program, we have a highly educated workforce,” Singh rhymed off. “There are certain advantages that we’re going to have.” A tax on CEO stock options “doesn’t impact … the structure of a company, it’s ability to produce a product [or] to be successful,” he insisted.

And it won’t hurt Canada’s growing tech sector, Singh promised, noting he has a circle of people he solicits advise from on entrepreneurship and startups. “We don’t want in any way to discourage innovation,” he said.

On AI and automation

One question from Twitter focused on automation and artificial intelligence. Singh cited driverless technology as a leading indicator of the trend. “A lot of folks that drive vehicles are going to see, in the not-too-distant future, that those jobs are going to be replaced,” he said. Preparing for that requires implementing training opportunities, such as teaching people to provide the inputs for AI systems. “There is a strong argument for a basic income,” he noted. Such a policy would be a way of “tackling inequality in a practical way, and a way that we can actually use the federal government’s resources to actually help people’s lives,” he said later.

READ: When robots steal your job

The wage floor in Alberta and Ontario rose at the beginning of the year, and the federal NDP promised it for jobs regulated at the national level in the last election. Singh gave a nod to Ontario NDP leader Andrea Horwath, his former boss, saying that she’d been the first to commit to a $15 target, “and then the government followed suit.” The party’s goal is a “liveable wage,” but a minimum wage raise is the first step, he said.