Paul Wells: The former bank governor has written a book, done work for the UN, and takes calls from the PM. Now, will he run? 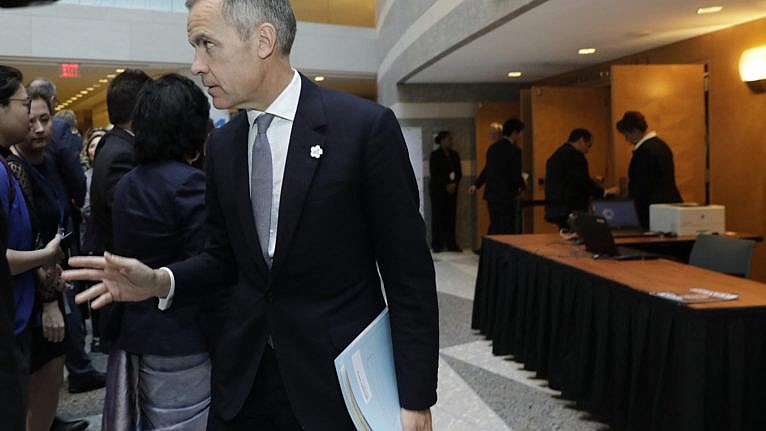 Carney leaves after a G-20 finance ministers plenary during the IMF-World Bank annual meeting in Washington on Oct. 18, 2019 (CP/Yuri Gripas)

For a guy whose work involves planning ahead, Mark Carney was less than perfectly prepared for the obvious question.

I was interviewing the only person ever to run two big central banks, the Bank of Canada and the Bank of England, about his new book, Value(s): Building A Better World For All. We here at Maclean’s will webcast the full interview with Carney on Thursday, March 18.

I had question(s) for Carney about subject(s). One was those call(s) he took from Prime Minister Justin Trudeau last summer about the post-COVID economy, call(s) that source(s) in the PMO were quick to market to reporters as evidence of Bold New Thinking in the government.

What were those calls about, I asked?

“I am asked for advice and perspective by a number of governments including from time to time Canada’s. And obviously I provide that advice, as you’d expect. But there’s nothing more structured than that. If the Prime Minister or any of the ministers here contact me and want to know my perspective on something, obviously I provide it.”

Was he being solicited, or was he testing the waters, for a political career?

On a Zoom call from his living room, a couple of kilometres from mine in Ottawa, Carney looked like he’d have preferred another question. “Look, I have—there’s lots of ways to serve, Paul.” He’s lately done his serving in two ways, he’s said. First, as a Special Envoy on Climate Action and Finance to the United Nations Secretary-General. As the next big UN climate conference approaches, Carney’s goal is “to get the private financial sector in a position so that it’s addressing climate change, so that climate change is part of every financial decision.”

And the second way to serve? “Actually, to write the book. I mean others will judge whether it’s a service or a disservice to impart all my thoughts on these various things.” The things in question were the economy-shaking crises Carney faced, like one damned thing after another, during his back-to-back central-bank tenures: the 2007-09 financial crisis, Brexit and COVID-19. Value(s) is about the lessons Carney draws from those crises and how they demonstrate, in his view, a gap that needs narrowing between what the market prizes (“value”) and what the heart does (“values”).

So he’s doing some work for the UN and he wrote a book, and a substantial, thoughtful one at that. Great. But why was he on the phone with the PM, and since one presumes the PM is periodically on the phone with people, why did these calls get gleefully marketed by PMO source(s)? I decided to try again.

“All of my colleagues in the gallery are just going to laugh and point at me if I don’t ask,” I said, “so I might as well ask. Do you anticipate running for public office at some point?”

You can watch on Thursday for his answer. It was…. inconclusive.

It had to be asked. Watch the full exchange between Paul Wells and Mark Carney on March 18th at 7 p.m. ET in the latest Maclean's in Conversation. Details here: https://t.co/GYDrb4aNg5 pic.twitter.com/GmNoVoDiio

The conversation will air on Thurs., March 18, 2021 at 7 p.m. ET on the Maclean’s Facebook page and YouTube channel, as well as at macleans.ca/inconvo.