Maryam Monsef on keeping a positive tone, speaking the truth, and carrying herself with integrity in the House 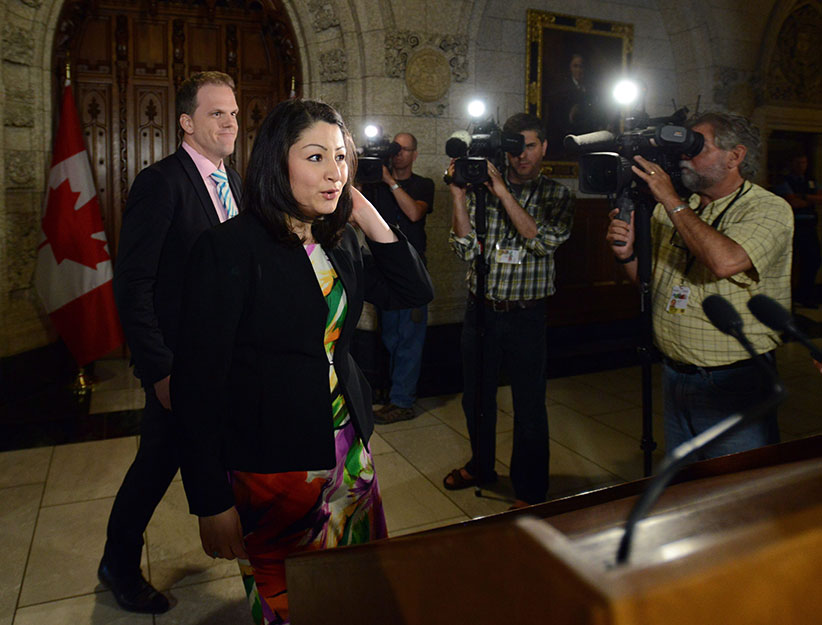 Minister of Democratic Institutions Maryam Monsef is joined by fellow MP Mark Holland, left, as they arrive to speak to reporters in the foyer of the house of commons on Parliament Hill in Ottawa on Thursday, June 2, 2016. (Sean Kilpatrick/CP)

Back in early September, I visited picturesque Peterborough, Ont., to interview Democratic Institutions Minister Maryam Monsef. It’s her home, and Monsef suggested we talk on the deck of her favourite coffee shop, overlooking the placid Otonabee River, not far from her constituency office in the city’s well-preserved downtown.

Among many other things, I was curious about how this rookie MP, only 31 years old, was maintaining her indefatigably upbeat disposition, often under intense questioning in the House of Commons over her main file, Prime Minister Justin Trudeau’s contentious yet vague pledge to somehow change the way Canadians elect their MPs.

At the time, I didn’t think her answer on comportment during question period was interesting enough to quote in full. But that’s changed. Yesterday, Monsef put on a shades-of-Paul Calandra performance in QP. She ridiculed the work of a House committee on electoral reform, derisively accusing MPs on it of failing to carry out their task of studying the issue and making a clear recommendation. In fact, the committee’s research was thorough and its recommendation for a referendum on a proportional representation model, to replace our old familiar first past the post system, seems reasonably precise.

Here’s our exchange from Sept. 6, which now seems so long ago:

Q: Could I ask about the tone of debate, in particular your experience, coming into such a prominent role so early in your political career? How have you found it in the House of Commons? There have been days when you took almost every question in question period, when it just kept coming. How does that feel to a rookie?

A: Well, rookie or not, I understand that question period is political theatre. I used to watch question period, so I understand that. I’m also there in that seat, in that place, because people here have a lot of confidence in me and they are counting on me to carry myself with integrity, to represent Peterborough-Kawartha well, and to speak the truth.

If my tone is positive, if I can maintain my composure, regardless of what the rest of that place is like, it’s because I know what a great privilege it is to be in that room. The people asking me questions, they’re doing their part in the democratic process, but they’re also giving me a platform to rise and speak from…

What people don’t see during question period, and maybe don’t hear, is how much camaraderie there is within, I think, all sides. People being supportive and saying, “Keep it cool, you’re doing good.”