The Liberal MP's revised birthplace doesn't change her narrative, but there are still troubling questions about Monsef's story that need answering 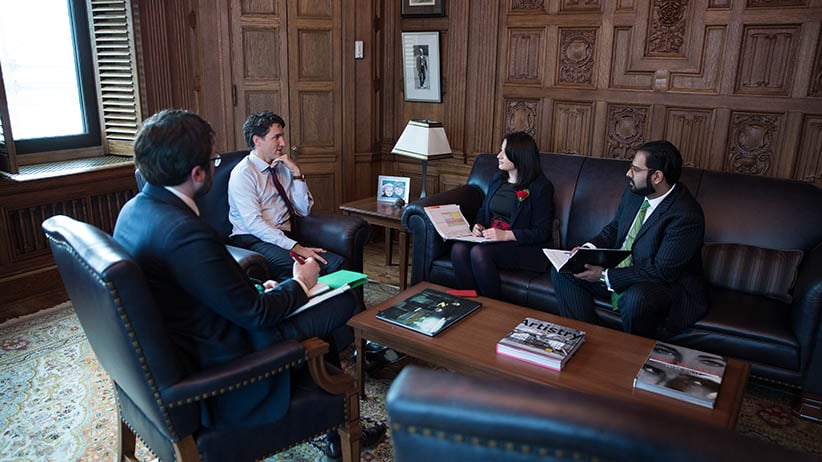 For 11 months, Liberal MP Maryam Monsef was best known for one thing: being the first-ever Afghan-born member of Canada’s Parliament. On Thursday, fellow citizens learned the truth: that the Trudeau cabinet minister (and her two sisters) were actually born in Iran, not Afghanistan, and that her mother kept that detail a secret—all these years—until a Globe and Mail reporter started asking some uncomfortable questions, forcing Mom to come clean.

“In recent days, my mother told me for the first time that my sisters and I were in fact born in Mashhad, Iran, approximately 200 km from the Afghan border,” said Monsef, the Minister of Democratic Institutions, in a prepared statement released by her office. “My sisters and I asked my mother why she never told us we were born in Iran. She told us she did not think it mattered.”

Does it matter? In a bizarre story—even by Ottawa’s standards—that is certainly not the only lingering question.

Does it matter that Monsef, heralded as the country’s first Afghan-born MP, was actually born in Iran?

Politically speaking, it does matter. Canadians were reminded, again and again, about Monsef’s historical first as an Afghan-born Parliamentarian. Her heritage is at the heart of her harrowing back story—the desperate refugee who fled Taliban rule for a new life in Peterborough, Ont.—and some voters are feeling understandably duped. Monsef’s mother, Soriya Basir, knew full well her daughter wasn’t born in Afghanistan, yet never felt compelled to correct the public record. Whatever her explanation, it will never satisfy everyone. Conservative MP Tony Clement, vying for his party’s leadership, has not only called for an investigation, but urged Monsef, 31, to “consider seriously stepping aside” if such an investigation is launched.

OK, but does it really matter?

Despite all the headlines, the revelation doesn’t much change the Monsef narrative as we know it. The crux of her story is still true: that Mom and her three young daughters, all Afghan citizens, escaped the Taliban’s rule and found safe haven in Canada when Monsef was 11 years old. Though born in Iran, Monsef is not an Iranian citizen (unlike in Canada, citizenship is not a birthright in Iran) and she had no legal status there. She was born an Afghan citizen, to Afghan parents. Bottom line: Monsef may not be Canada’s first Afghan-born MP, but she is still our first Afghan MP. The distinction is negligible. Had Basir revealed the truth when her daughter first sought public office, it never would have been a story.

What do we know about Monsef’s family?

Abdul Samad Monsefzadeh married Soriya Basir in 1982, after the Soviet invasion of Afghanistan. They later moved across the border to Mashhad, a city with a large Afghan population, because the security situation in Herat had become “untenable.” Monsef was born in November 1984 at the Imam Reza Hospital and lived in Iran until she was nine. She was only four when her father, a car-parts trader, was shot and killed near the border, either by bandits or Soviet troops. At the time, Monsef says, her dad was trying to return to Afghanistan to “save his cousin.” Widowed, Basir and her daughters eventually moved back to their home country in 1993, but fled yet again in 1996, after the Taliban seized power. After escaping through Iran, Pakistan and Jordan, the family boarded a flight to Montreal, where they claimed asylum.

Monsef’s mother hid the truth from her daughters. Did she hide it from the Immigration and Refugee Board (IRB), too?

For the most part, IRB hearings are private affairs, so unless Basir decides to disclose her personal documents, it’s impossible to know what she originally declared as her daughters’ country of birth. (Maclean’s has asked Monsef’s office to answer that question; it has yet to respond.) The minister’s current passport lists her place of birth as Herat, Afghanistan, so it’s fair to assume her mother did the same on their original asylum claim. “It’s a reasonably good guess,” says Peter Showler, a former chair of the IRB. “There is a document trail that would have continued here in Canada.” In other words, if Mom told the IRB the girls were born in Iran, how could the Passport Office subsequently issue a document listing a different birthplace? The red flags would have flapped. But here’s the potential problem: As we now know, Monsef was born in Iran, so if her mother told the IRB she was born in Afghanistan—which the paper trail seems to suggest she did—she was not being truthful. Plain and simple.

If her mother provided inaccurate information to the IRB, does that mean Monsef could be stripped of her citizenship?

Again, it’s not clear what Basir told the IRB. But even if she failed to disclose where her daughters were born, experts in refugee law are divided about the potential consequences. According to the Citizenship Act, the government has the power to revoke citizenship on the grounds it was obtained “by false representation or fraud or by knowingly concealing material circumstances.” Material is the key word. Simply put, would the evidence that has come to light have altered the IRB’s original opinion that Monsef was a bona fide refugee? “If it was not disclosed that she was born in Iran, that, in my opinion, is a material misrepresentation,” says Toronto immigration lawyer Guidy Mamann. “If you find one lie, then you start questioning the whole story.”

Michelle Rempel, the Conservative Immigration critic, seems to agree, saying there could be “serious consequences” if Monsef’s refugee claim contained false information. But Showler, the former IRB chair, sees it differently. Because Monsef had no legal status in Iran (to repeat: she wasn’t a citizen, despite being born there), her birthplace had zero bearing on the case. “What you are doing with a refugee claim is you’re saying: ‘I cannot go back to my home country because I will be persecuted,’” he says. “Whether or not she was born in Iran is irrelevant. The only country for which she had citizenship was Afghanistan, and that is the country from which she feared persecution.” Showler says “there is not one chance in 1,000″ that Monsef’s immigration status is in jeopardy. “It’s very, very difficult to unwind citizenship status,” he continues. “You can do it, but almost always when it happens, it’s because somebody has committed a serious crime and there are reasons you want to get them out of the country. For something like this, there would be absolutely no reason for doing it.”

What if her mother did tell the IRB that Monsef was born in Iran?

For one thing, it would eliminate any chance, however remote, of the minister being stripped of her citizenship. It would mean Basir provided all relevant facts to the IRB, and that the board concluded all four claimants were genuine refugees. If that’s the case, however, it does raise yet another question.

If the Immigration and Refugee Board was told that Monsef was born in Iran, how could she not know?

Think back to the ensuing document trail. If the IRB was informed of her true birthplace, that same location would have been listed on her subsequent permanent residency forms, her citizenship application, etc. Under such a scenario, it seems implausible that Monsef would have remained oblivious to the truth all this time—or that the Privy Council Office, which conducts a “rigorous vetting process” for would-be cabinet ministers, would not have stumbled upon the evidence. It’s much more likely, as discussed above, that Monsef’s mother chose to hide from the IRB what she hid from her daughters: that they were born in Iran.

Why did Soriya Basir never feel compelled to tell her daughters the truth?

In her mom’s mind, Monsef says, the girls’ place of birth was inconsequential, especially because it came with no status from the Iranian government. Basir and her daughters are Afghans in every way: by lineage, citizenship and culture. As Monsef told one reporter: “Our family is Afghan, our clothes are Afghan, our rugs are Afghan—to her, it didn’t make a difference.” Only now, Monsef says, does her mom realize that such details do matter. “There has been yelling about this and there has been anger and sadness and, she’s sorry,” she told the Globe. “But she understands now how important it is to be concise.”

The minister insists that she believed—“for my whole life”—that she was born in Afghanistan, and that she only learned the truth after that reporter started poking around. Speaking to numerous media outlets, she has also described the shock, anger and confusion she felt after her mother broke the news. “It’s fair to say I have experienced a range of emotions over the past few days as I have tried to understand this with my family,” her prepared statement said. “Because I know my story has resonated with many Canadians, I wanted to take the time today to clear any misconceptions this may have unintentionally caused.”

Most political opponents have been reluctant to question her version of events, saying it’s a personal matter. But in her home riding, not everyone believes her story. Dean Del Mastro, the former Conservative MP (who was convicted of overspending on his 2008 campaign) told the Peterborough Examiner that people who run political campaigns in the city all knew that Monsef wasn’t born in Afghanistan. “That’s been known for quite awhile,” he said. “This story that she’s just learned is not true.” Mike Skinner, the Conservative candidate who lost to Monsef in last fall’s federal election, told Maclean’s questions were raised in the heat of the campaign about her true place of birth. “We definitely heard rumours about it, but nothing that was substantiated, and we had no evidence to prove that that was true,” said Skinner, a former software business owner, and now chief executive of the Greater Peterborough Innovation Cluster. In Skinner’s opinion, where Monsef was born is irrelevant—with one caveat: “The only part that would matter is if, in fact, Maryam did know and she’s lying about it today.”

Just this, from the final few paragraphs of Monsef’s prepared statement: “Some survivors believe healing comes from telling their story; others cannot fathom revisiting the past. My mother never talked about the unspeakable pain that conflict and terror inflicted on her. This week my sisters and I asked her to relive that pain. Conflict has robbed me of a father and it has scarred my family and I for life. We thankfully found a welcoming home in Peterborough, Ontario, Canada, where we began the challenging and difficult process of resettlement. Coming to Canada as a refugee—twenty years strong and now a member of cabinet in the 42nd Parliament—I feel a tremendous deal of responsibility in upholding all that this great country has allowed me to become. This includes accountability to the public and transparency. Canada has played an important role in allowing me to become who I am today. It’s the only place I’ve ever truly felt I belonged, and I couldn’t be more proud to be Canadian.”